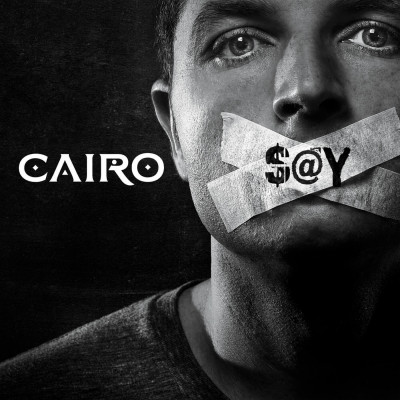 Cairo are the brainchild of ex-Touchstone vocalist and keyboard player Rob Cottingham. After spending a decade writing and performing for the modern prog favourites, Cottingham has elected to spread his wings. After completing work on a well-received solo album under the pseudonym Captain Blue, he formed Cairo to present more band-oriented work.

Let’s address the elephant in the room up front: Say is undeniably reminiscent of Touchstone in their pomp. There’s a similar emphasis on contrasting melodic keyboard work and vocal lines with chunky, heads-down riffing and thundering drum fills: this is progressive rock with the emphasis on rock. Lead vocalist Rachel Hill often sounds remarkably like Touchstone’s Kim Seviour – not that that’s ever a bad thing. Say also features a lengthy spoken-word section, also something instantly reminiscent of Touchstone. The cynical might raise an eyebrow at the similarities and wonder exactly why Cottingham felt the need to leave Touchstone to make a record so redolent of Touchstone’s oeuvre, but then Cottingham’s writing was always a chief feature in Touchstone, and these similarities are perhaps best explained away as harbingers of that inimitable style, carefully honed over the course of Touchstone’s back catalogue and now given the space to develop on its own. For that is exactly what is happening: for all the unmistakable similarities to Touchstone’s output, Say contains some intriguing green shoots of new growth.

Chiefly notable are the more overt flourishes of electronica. Cottingham has flirted with this side of his writing on the Captain Blue album, but here, integrated more fully into the rock sound of his new band, they are if anything even more striking. In lesser hands, the extended largely synth-led instrumental passages of ‘Nothing To Prove’ and ‘Random Acts Of Kindness, Part 1’ might have fallen flat, but Cottingham’s use of thick, gritty synth passages adds a pleasing modernity and a sharper edge to proceedings. Many modern prog acts seem to be retreating to the 1970s for inspiration, sonically and conceptually, but Cottingham appears to be quite happy in a more contemporary environment.

With that said, the flipside of the band’s ease with a more modern sound is that the album does feel mildly schizophrenic at times. Whilst the contrast between the riffier, edgier material and the more straightforwardly melodic fare – best exemplified here by the title track or the limpid balladry of the Hurricane Katrina-inspired ‘Katrina’ – delivers both variety and a frisson created by the contemporary meeting a more traditional sensibility, the cohesiveness of the album suffers somewhat as a result. It is to Cottingham’s credit that he appears equally at ease operating in two different styles, but the end result is an album that feels a little like two quite different records welded skilfully together rather than a single statement of intent. The album remains a striking debut – it just might not feel like a debut to Touchstone fans waiting to see what Cottingham has turned his hand to next; a feeling only strengthened by Cottingham’s decision to pick up the long-running conceptual story of the ‘Shadow’ where it left off on his last album with Touchstone, 2013’s Oceans Of Time. Comprising the previously mentioned spoken word piece, ‘Shadow’s Return Prologue’ and ‘Shadow’s Return’ itself, the continuation of the story feels less like another chapter than a statement of intent that there will be more to come. It’s a crowd-pleasing moment for Touchstone fans, certainly, but it’s hard to shake the feeling that listeners unfamiliar with Touchstone’s catalogue may be left scratching their heads and wondering what it’s all about.

However, this is Cairo’s first record. Regardless of its occasional musical schizophrenia and willingness to look back as often as it looks ahead, Say is a confident, polished, wonderfully performed and produced record that showcases Cottingham’s skills as a songwriter and performer, and his new bandmates as perfect foils. All of the band members acquit themselves extremely well, although special mention has to be made of Graham Brown’s exceptional drumming: his playing displays a tasteful restraint when it is called for, but on the more rock-oriented fare he’s a force to be reckoned with, clattering around his kit with infectious abandon. Brown and bassist Paul Stocker make for an exceptional rhythm section, and their tight playing plays a huge role in keeping the album as taut and powerful as it is. Also impressive is the production of the album, undertaken by Cottingham and the multi-talented and seemingly indefatigable John Mitchell of Arena, It Bites and latterly Lonely Robot fame. The album sounds enormous: the thundering drum sounds, the almost eerie clarity of the vocals and the well-defined guitars lend the album the feel of a live performance without sacrificing any of the studio gloss – no mean feat, and it’s not hard to see why Mitchell is in increasing demand as a producer.

Say is an extremely impressive record in every sense, and its strong sense of melody and atmosphere should hold some appeal beyond the progressive rock fans who are already familiar with Cottingham’s work. Its only arguable shortcoming is perhaps Cottingham’s apparent unwillingness to start completely afresh; in his contentment to seize upon musical and lyrical tropes he has developed during his time with Touchstone, this record feels almost as much a continuation of that work as it does something wholly new. Still, that is certainly his right, and perhaps it is ultimately the point: Cairo may be a band, but Say is very much Cottingham’s album, and a logical culmination of his whole body of work up to this point. Say feels very much like a summing up, a consolidation of all that preceded it. Perhaps the next Cairo album will find it easier to become something truly of itself; until then, this is a hugely entertaining and memorable album.