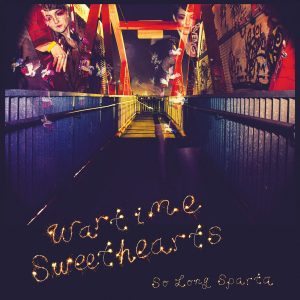 Released on October 4, 2016 via Art As Catharsis Records

We associate Australian label Art As Catharsis Records with all that is good in antipodean noise, drone, and experimental music. It comes then, as something of a refreshing change, to hear Wartime Sweethearts’ lush, uplifting and generally gorgeous pop.

Not that it’s an easy option mind you (this is Art As Catharsis after all) this is pop as it should be (but rarely is), multi-layered music and obscure lyrics that draw from modern life or classical history/literature and driven heavily by piano/keyboards and lively percussion.

Sydney based Louise Nutting is the genius behind it all and, yes, you will think of St. Vincent or Bjork or Bat for Lashes or Goldfrapp – but those are pretty good artists to draw on. Let’s not though, obscure Nutting’s work by making lazy comparisons as So Long Sparta is more than able to hold its own as a touchstone for strong, innovative, and assertive women’s voices in music. We live in serious times, this is serious music, but with all the exquisite immersiveness of Bacharach and David, or Richard and Karen Carpenter and often with some of those vocal dynamics too.

Musically, there are all kinds of clever things going on – the luscious electronic treatments of each track are more than complimented by the organic bedrock of piano, strings, and acoustic guitars that seem to anchor this album in the same kind of sonic territory as Kate Bush’s Hounds of Love or The Dreaming – probably the latter is the most obvious touchstone for this record, and while Nutting’s voice doesn’t have quite the same gymnastic range as that of Bush (but, frankly, whose voice does?), it’s certainly distinctive, sweet, and more than able to make you happy or sad with each note that’s given breath.

Thematically, love and relationships, our ideas of beauty and perfection in both the male and female form are considered, but Nutting has the intelligence to remain obscure and not hand the listener the answers on a plate. Each song is dreamy, and like a dream, the words slip in and out of our consciousness sometimes forming images, other times just impressions and feelings – It’s very cleverly done.

What impressed me in particular, was that every song on the record sounds like a single, from the strong vocal lines of Figure It In, Figure It Out, the fantasy trance-loveliness of Herculean Dream, to the swing-time beat of Mood Swings and Brubeck-esque syncopation of  Ms. Olympia and The Meat World – any one of which you could imagine on daytime radio.

Of course the hard bit, as ever, is taking interesting work like this and gaining a wide following. Nutting certainly has a foothold, and it will be very interesting to see how Wartime Sweethearts develop going forward. A slow burn perhaps, but a good burn.