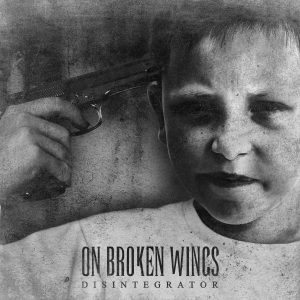 Released on August 19, 2016 via Artery Recordings

It’s always interesting reading a band’s PR blurb. Now marketing is part of my day job, and something that I like to think I understand. But using words like “legendary”, “veterans” and “household name” is going to set certain expectations. Rather than an exciting cutting-edge hardcore album I got something poorly executed in places and somewhat confused. The first thing that hit me about this album is the guitar tone, now I know this might sound pedantic, but this is something central to this music, bands like Meshuggah and SikTh nail the high-gain, detuned sound. On Broken Wings don’t, and the some of these songs suffer for it, it’s muddy and lacks clarity.

I’ll ignore the interlude type tracks, because I’m not sure what they add to the album. The first full length track ‘Quicksand Breaths’ has the aforementioned hideous guitar, the tracks sounds messy. It has some interesting use of sound effects and clean vocals at the end of the track that adds some much needed colour and depth. ‘Dragging Weight’, a little more interesting, but does sound like early Korn. This is a track that I can see working live, living up to the mosh-metal description used for this lot. Next, ‘Rubik’s Cube Obsession’, this track has clean vocals as well, the things is they don’t match and actually seem to clash with each other. The mix doesn’t help but parts of the track (especially the clean vocal parts) just get lost in the mire.

Now, at this point, the album takes a turn for the better, ‘Crowns Meant For Kings’ is a great track. A fast, heavy and complex modern sounding djent-style riff. Interesting use of discordant guitars and sound effects with sharp, piercing vocals. ‘Dirt Nap’ has a sharp, driving main riff, interesting use of clean/scream vocals. It’s heavy, but has shape and colour without the mush and muddiness of some of the previous tracks. The last track ‘Ego Ideal’, starts with a main riff that develops during the track, the riffs gel well with the rhythm section, the brutal drums especially.

Not wishing to re-use a hackneyed sporting term but this really is an album of two halves. ‘Crowns Meant For Kings’, ‘Dirt Nap’ and ‘Ego Ideal’ are great, modern, heavy tracks, but the first few tracks are poor in comparison. The album sounds like a band stuck somewhere in between the past and the present. Getting it right on a few tracks and quite wrong on others. Dropping the interlude tracks and careful choice of tracks might have made a very good EP. Heavy music has had a great few years with several ‘comeback’ albums, this one, unfortunately doesn’t hit the mark for me.