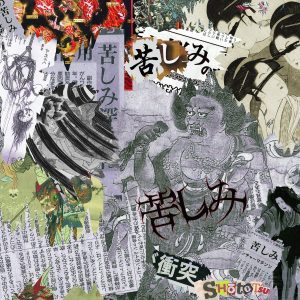 Released on September 14, 2016 via Art As Catharsis Records

The outré improvisational Australian noise collective return with an Autumn storm for 2016. You may remember, if remembering is your thing, that back in January Kurushimi released their eponymous debut album which we absolutely loved here in the secret jungle HQ of Echoes and Dust.

For the uninitiated, Kurushimi are less of a rock band more of a Da-Da-esque art experiment in the wilful destruction of anything that makes sense in the received set of musical structures that we, each and every one of us, considers conventional. Kurushimi are, in fact, proponents of the Violence in Action system, which is an arrangement of games or strategies designed to manipulate elements of musical improvisation. These games become ever more complex and so, a conductor forms part of the band membership to prompt the players at any given moment and, we can only assume, keep some semblance of order – whatever order is.

The results are, perhaps, the most glorious and unhinged cacophony of thrash metal and free-jazz committed to tape in the Twenty-First century. What sounds like chaos, actually works as a whole, following the whole Violence in Action rules – it’s a self-organising universe that makes total sense once you’re inside it and none at all if you just watch from the sidelines. I played the album to a friend who said it sounded like “someone’s superglued the locks on a speedy 1980s coupé and Ornette Coleman is trapped inside, he meanwhile has lost his voice and can only communicate through his horn.” Which is, on the whole, a fair and accurate description.

Now, I don’t know whether to describe the record as a long EP or a short LP – and I’m certainly not going to attempt a description of what the racks are like – there are three shorter blasts of lunacy: ‘Rats Gnaw Your Face’, ‘Karasu No Kogeki’, and ‘Giblets’, the first two clocking in at about a quarter of a minute playing time, the latter a self-indulgent two minutes and forty seconds. These exercises in Napalm Death style restraint are interspersed by the main meat of the recording, two longer tracks: ‘Gambler’s Death-Shuffle’ and the face-melting ‘Silent, As In A Crimson Sunrise’.

All the tracks revel in their ability to deliver shock-and-awe music like nothing else. It’s music which simply cannot be pigeon-holed. Possibly the only artist I can think of on as extreme a tangent as Kurushimi is Merzbow (you may know of more, let me know using the comments field – it’s what it’s for). I’d love to hear them collaborate, but it would possibly mean the destruction of all life as we know it Jim.