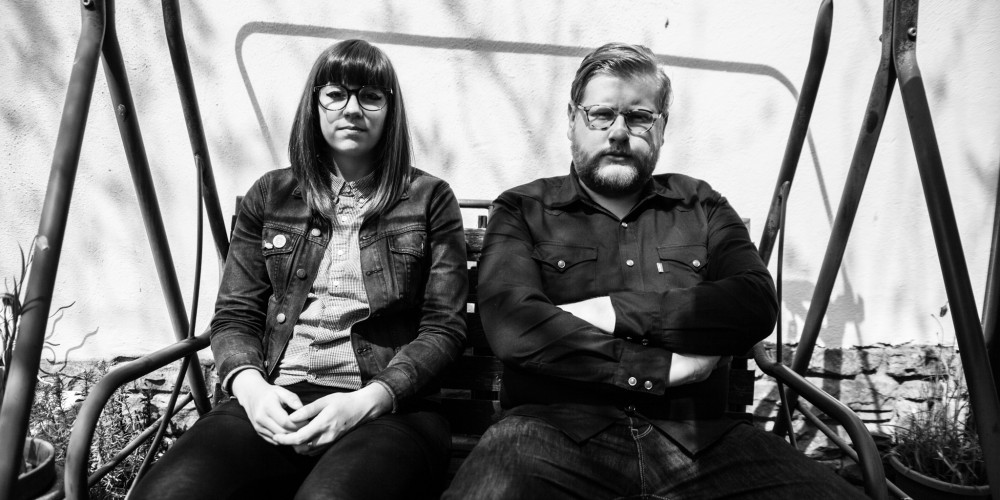 Kamikaze Girls are vocalist/guitarist Lucinda Livingstone and drummer Conor Dawson who describe themselves as a Riot Grrrl two piece based in Leeds and London. They released their first eponymous single in October 2014 followed by five more until this September’s release of their 5 track EP ‘SAD’ (1,2). Due to the band’s honesty in engaging with issues of mental health Punktastic, in a review of ‘SAD’, described the band as ‘an important voice in the punk scene at the minute’, and ‘SAD’ as ‘a staggeringly bold accomplishment’(3). Combining a variety of influences including Bikini Kill and Sleater Kinney with their own pop sensibilities Kamikaze Girls stated aim is to challenge attitudes towards mental health, to stand in solidarity with other young people struggling with those issues and, if that’s not enough, to work with other bands to eradicate gender stereotypes in music (1). With a mission statement like that and music to match I was always going to be asking if an interview was possible-fortunately it was!

(((o))): Could you give us an overview of Kamikaze Girls? Had either of you been in other bands before?

Lucinda: Myself and Conor were both in a band called Hearts & Souls with our friends Andy & Justin. We’re technically still the same band as we’ve just lost members and had a name change but it feels very separate to KG. I was also in the pop punk band called This City Sleeps for quite a while.

(((o))): Was there anything specific that made you decide to form a band together? Similar ideas musically?

Lucinda: I don’t know really, it was just timing. Conor and myself had hung out before and played shows together in different bands but we both found ourselves without a band and I was starting one up and Conor’s band weren’t doing much and he wanted to do more so we just started jamming.

Lucinda: Kamikaze Girls is a novel and a film. We knew about the film first. We were on our way to our friends sisters wedding and Conor told me the name and said he was surprised there wasn’t a band called that. We liked it so much and thought it suited our sound so we decided to change the band name from Hearts & Souls then and there. It’s nice to have a band name you actually like!

(((o))): What bands and musicians have inspired you?

Lucinda: I was a huge Michael Jackson fan growing up, I was obsessed. I was brought up on pop music and then found punk rock in my early teens with bands I found on Scuzz, through Kerrang and in P-Rock. As I got a little older and realised you didn’t just have to like one genre of music I started listening to a lot of indie, electronic, shoe-gaze, experimental and atmospheric music. Artists that have really inspired me over the last 10 years have been Alabama Shakes, The Julie Ruin, Julien Baker, The Album Leaf and Explosions In The Sky.

Lucinda: We technically formed in 2009 as Hearts & Souls. Then Kamikaze Girls as a two-piece has been going about two and a half years. The sound has developed quite a lot from where we started in 2009. We were atmospheric pop-rock that played to a backing track. A very large rich sound with synths and strings. We’re now a very noisy two-piece with less members, no backing tracks and I wouldn’t have it any other way. Our live show went from being meticulously planned out to being chaotic, fun and unpredictable. My vocal style has changed hugely as well. I never used to shout and scream, so that’s been a more recent thing as of the past few years.

(((o))): Did you have a fairly clear idea of what you were aiming for from the start or is it constant evolution?

Lucinda: When we wrote SAD I think we were testing what we could achieve as a two-piece, and how big we could make our sound. Our live show is very important to us and we love experimenting with things live and manipulating our sound to make each show unique. At the moment we’re writing for an album and I think we’re being a lot more experimental with things and seeing what develops. I like what we’ve done so far!

(((o))): How does the creative process work in Kamikaze Girls? Is there one main songwriter or is very collaborative?

Lucinda: I will write all the lyrics and melodies but the music is both Conor and myself. I write riffs, Conor writes riffs, and then we’ll get in a room and jam. I will rarely write a full song myself without Conor’s input, and nothing feels fully finished until we’ve both been in a room together playing it.

(((o))): You say on your Facebook page that you want to use your music ‘as a means to challenge attitudes and taboos surrounding mental health’ (1). Was there anything you feel able to talk about that led to that commitment?

Lucinda: Yeah totally. I’ve had some real problems in my lifetime dealing and living with mental health issues. I’ve not really felt comfortable talking about it until more recently. I feel like it’s important to talk about these things because people consider them ‘awkward’ topics. I used writing music as a means to channel it and I felt a lot better for writing music and going to shows and being able to put my time and energy into something I loved so much really helped me. That’s not to say that’s the answer for everyone but I feel like the more educated people are about mental health issues and where to go to get help or how to talk to someone with those issues the better it can be for people in the long run. People shouldn’t feel alienated because of something that affects millions, we’re all in it together.

(((o))): How has the DIY/punk scene responded? I guess quite a number of people must have been encouraged?

Lucinda: People have been super positive, and most shows we play I’ll have conversations about it when we come off stage. People perhaps saying they relate to certain lyrics, or they’ve taken the same meds as me and they know how I feel, or how they want to pursue something creative to help themselves. Again this isn’t something that works for everyone, but I think having a safe space where you feel okay to talk about these things is important, whether you want to speak out or not.

(((o))): In the book ‘One Chord Wonders’ Laing comments that first wave punk created space for women to deconstruct and explore gender (4). Do you think that is still true of the punk/DIY scene, has it continued to be a space to explore and question gender?

Lucinda: I think it just comes back to having a space that’s safe in the first place. Like I mentioned before it’s important to have somewhere you can go where you feel yourself. There’s some great places in the UK like DIY Space for London, the Owl Sanctuary in Norwich and Wharf Chambers in Leeds. All run by great welcoming people, and all places that encourage diversity and respect for your peers.

Lucinda: Sure! SAD was written about a specific period of time over about 2-3 years when I was experiencing severe depression, anxiety and post traumatic stress disorder. I had issues with depression in previous points in my life but it was at it’s very worse at the point where I wrote the EP. I was attacked, held and gunpoint and robbed one day in Leeds and it ruined my life for two years and everything spiralled out of control. I couldn’t leave the house, my relationships suffered, my mental health pretty much didn’t exist and I didn’t feel like a real person. It was like that particular event triggered a lot of issues I didn’t know I had and although the EP is short each track is about dealing with an aspect of that.

(((o))): Are you happy that it ‘captures’ where Kamikaze Girls are now? Often musicians feel their releases document where they were!

Lucinda: Definitely. It documents that period of time and it kind of gives me closure on it in a way I didn’t think it could. I’m excited to get started on our next release knowing I’ve put what I felt at the time when I was writing the EP to rest.

Lucinda: We’re on tour for the rest of the year. We’ve been on tour since August and we’re leaving for Canada and America tomorrow. We have 2 months over there and then we’re coming back for some UK dates to end the year on.

(((o))): What bands and writers have you been enjoying lately?

Lucinda: At the moment I’m really enjoying the new Touché Amore album and the new Doe album too. Book wise I have the Travis Barker biography to read when we’re on touch as I’ve been recommended it so many times I feel like I need to check it out for myself. I’m also re-reading at the moment a book called ‘Junk’ by Melvin Burgess. It was the book that inspired me alot when I was about 19/20 and it sort of lit a fire in me for writing honest lyrics so it’s been nice to get my head back in that and discover new parts off it.

Big thanks to Kamikaze Girls and Jamie for organising.