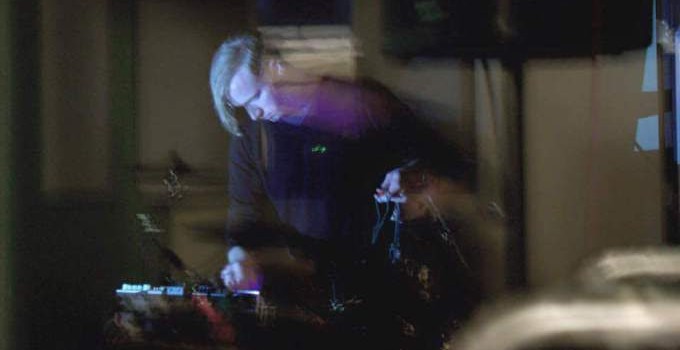 By: Rodrigo Delli
It’s easy to be introduced to great music by someone we love – and that’s what happened with Hey Exit, whose magnificent musical experiment Every Recording Of Gymnopedie 1 was praised by none other than Deru! But the truth is that far beyond this amazing loose track, Hey Exit has a complex, multifaceted and solid musical drive; crossing paths between ambient, harsh noise and drone music. Brendan Landis, the man behind the title, is not only talented – he was very gentle, animated and even funny throughout our conversation! Please, take a seat and prepare your head!

(((o))): Well, lets go! Whats your age now and what was when you started to make music?

Hey Exit: I’m 32. I first picked up a guitar when I was 12, and started playing in bands at 14. Although, I had a boombox with a microphone as a kid, which I used to record weird, funny vocal experiments.

(((o))): Nice! Would you like to mention some of the bands or projects in which you played before Hey Exit?

HE: There have been a few noise projects with different collaborators – Esther Chlorine, It Breaks, Tethers, Rough Weather. I also used to play traditional Japanese music with different ensembles… Let’s see. High school was all weird punk bands, then my early 20s it was IDM / chiptune beats on tracker software. There’s been a lot of other projects I guess! Ha!

HE: Ummm mostly just the noise stuff at this point, thankfully! Haha. I think there are some youtube videos of me playing in koto ensembles but only larger shows where I’m super nervous and don’t play so well, lol.

HE: I started Hey Exit in ’09 as a free improvisation project, and was pretty productive with it for a year or two. I played tabletop style like Keith Rowe, lots of contact mics, rocks and sticks, etc. I was really not into rhythm and pitch for a while. Eventually I got tired of that, took a break, and now I’m swinging back the other way, making more pop-ish, written music.

(((o))): I noticed that you have releases in many formats, including cdr and tapes. Tell us about the process of looking for labels and transcend the virtual to the physical world.

HE: I’m just now starting to look for other labels to release my music, actually. For a while I was very into weird packaging. I would make CD and cassette cases out of 5″ floppy disk cases or banana leaves or string or diapers or… Now my packaging is more straightforward, ha. I released a lot of cassettes in 2015/16, but now I’m starting to think more about vinyl. I’d like to put out a very nice LP this year. I’m definitely ready to put a lot of time and care and effort into a single release – as opposed to the rapid fire release schedule of cassettes.

Anyway, internet releases are essential for accessibility, but there’s something to be said also for having an art object – something to hold in one’s hand. I mostly listen to mp3s on my phone or laptop these days, but I definitely appreciate the experience of playing a physical object, reading liner notes, looking at cover art. It makes the music sound different, you know?

(((o))): Wow, an 10″ vinyl with your experiment with Gymnopedie would be a dream come true! Well, to talk about your most recent releases, Caudata has some melodic moments, but in you last full title, Slow Names 4, we hear some music a little bit harsher?

HE: Funny, I think of SN4 as pretty soft and listenable, ha! Especially compared with the harsh noise parts of Caudata. Either way, contrast has always been a big interest of mine. I like music that requires the listener to use different ears and different listening sensibilities at different times. I also like the way you can hear a certain passage differently depending on what’s come before it.

(((o))): Now I wanna know about your expermibtation with the Gymnopedie 1. How does something like that get in to your mind?

HE: The Every Gymnopedie piece kind of happened by chance. I think I was making toast when I had the idea to compile every existing recording of Satie’s Gymnopedie 1 and layer them on top of each other. It was one of those moments like, “Ah, I better do that before someone else does,” haha. After compiling all the recordings, I first decided to remove all the nonstandard arrangements (some of which were quite good!), plus all the duplicates (some recordings appeared in multiple compilations). I ended up with about 60 recordings, give or take. Finally, it seemed right to timestretch them to the same length. I chose the length of the longest recording – about six minutes. So, the first and last notes are all in unison, and the rest is just an ocean of rubato.

Then, for good measure, I made another version that was 30 minutes long, because of course you have to do that, haha.

One of the things I like about the piece is it’s so easy to reproduce. I got a lot of comments like, “Do it with all three Gymnopedies,” or “Do it with this other piece,” or whatever. The cool thing is, anyone who’s handy with a computer can mess around with this stuff, no biggie. Not to compare myself at all, but it reminds me of the way Lucier’s I am Sitting in a Room has this open source kind of feel – like the piece contains instructions for creating the piece. It’s very simple and transparent.

(((o))): But the question that stills flying over my head is: what was the model, the source for this experimentation?

HE: Maybe it was a combination of a few things. Like many people, I’ve just been listening to the piece for so long, have tried playing it on a couple different instruments, etc. There’s also a precedent for this stuff – from John Oswald’s Plunderphonics pieces to the slowed-down Bieber track to the youtube video of every M*A*S*H episode layered (or every Star Wars intro layered) to early-2000’s mashup culture. So it’s not completely out of nowhere! Emoticon slightsmile Apart from that all I can say is it was a nice Sunday morning gift from the Muse. Very thoughtful and generous of her.

(((o))): There’s a guy that’s addicted to White Albums, he has a store that only buy original copies of White Albums, and he make something similar: he recorded 100 copies playing at the same time! (thanks to Music for Maniacs for this indication)

HE: Yes, Rutherford Chang! I love those! (And I say that as not a huge Beatles fan, haha.) I must have read that on the same blog.

(((o))): I don’t know what you expected from the final result of your experimentation, but immediately the Cascade album, from William Basinski, comes to my mind. A definite and terribly beauty cascade!

HE: That’s flattering, I’ll take it! Big fan, just saw him play at PS1 a couple months ago with Grouper. They were both amazing.

It was a strange one-off kind of piece, a quick aside from the other projects I’ve been working on. But, I’ve been thinking up some more plunderphonic pieces on the side, and hoping to have a release together some time this year. We’ll see!

(((o))): One last point about Satie: how do you get all those versions? I knew of Satie two years ago and I’ve made a deep search for a version executed for himself, but found nothing… Did you have more luck?  Do you have a favourite version? Mine was played by Branka Parlic in Erik Satie ’88 Initiés ’99.

HE: Oh nice, I don’t know that one by name! It might be in the compilation, ha. The recordings were gathered from a bunch of different places. There’s one I’m very fond of by Riri Shimada.

(((o))): Well, to stay in this field I think that we should talk about records. Do you remember what was the first one that you bought?

HE: I just started buying vinyl a couple years ago actually! Maybe it was ODB and Joy Division Peel Sessions? But when I was young my first CDs and tapes were Superunknown, Jar of Flies, Mellow Gold, In Utero, Astro Creep 2000 – all those really shaped my ears at 11 or 12, especially Mellow Gold. The pitched down vocals, the weirdly dark, grotesque vision of Middle American alcoholic poverty, the sludgey, upbeat, not-rock-not-pop sound. That stuck in my ears in a big way.

(((o))): What was the album that you listened more in all your life? What was the best album, if this question does not bug you, is the best of 2016 so far?

HE: Oh gosh, well, so besides the obvious stuff like Purple Rain / The Downward Spiral / 36 Chambers / Loveless, my all-times are something like Choirs of the Eye [Kayo Dot], Selected Ambient Works II [Aphex Twin], Alien Observer [Grouper], Hell Songs by Daughters, Jumping Rabbit by Chieko Mori, Lament for the Rise and Fall of the Elephantine Crocodile [Yoshi Wada], The Black Saint and the Sinner Lady [Charles Mingus], this one tape Hypnotic Santoor by Shivkumar Sharma… That seems like a good place to stop, ha.

2016 has been just so intense. It’s not all from this year but some things I’ve had on repeat lately are Yowler, Young Thug, Plebeian Grandstand, Kool A.D.’s Real Talk, Future, The Tired Sounds of Stars of the Lid, Loren Connors, Grouper (duh), Hildegard, Dead Moon, The Caretaker, Nicki Minaj, and my AC unit.

(((o))): Sorry if it could sound repetitive, but would like to point some underground or obscure bands/projects that deserve more attention?

If you like harsh stuff there’s a compilation that just came out called Cut Up America. It’s three tapes plus a zine. Good stuff!

(((o))): Thank you for all your attention and dedicated answers!

HE: Cool man. Thanks for all the interesting questions, it’s been fun!