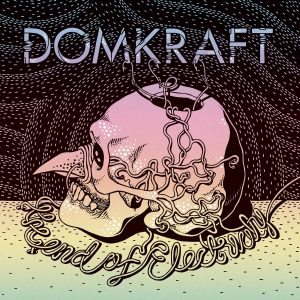 Here’s a game: what’s the first thing that pops into your head when you hear the words ‘Swedish doom trio’? Let’s face it, it could be any one of a zillion bands, given the prodigious rate at which Sabbath-worshipping power trios emanate from the country. In fact the theory concerning the existence of a laboratory in an industrial estate on the outskirts of Gothenburg that secretly clones long-haired, flare-wearing, waif-thin guitar-wielders with a love of Big Muff pedals has never been disproved.

But wait. Put aside all your preconceptions right this very minute. For Domkraft are different. Yes, they are a trio. Yes they are from Sweden. And yes, the noise they make could be classed by time-starved record store owners as doom. But man, they are so much more. In fact they are incredible. They’re heavy, yet hypnotising. They’re loud, yet languid. They’re simple, yet psychedelic – and so, so good.

It’s clear from the outset that Domkraft love a good riff. They love one so much that they have no qualms over playing it over and over, for 10 minutes or so. In fact the opening track, ‘The Rift’ seems exactly that, on first listen: 10 minutes of a large riff, over which vocalist Martin Wegeland (who also plays bass) shouts repeatedly in a very un-doom fashion – he has a tone cross between Chris Spencer of Unsane and the dude from Mudhoney, at least to these battered ears – about being lost in the titular canyon.

But the thing is, the riff is so large, warm and, y’know, fuzzy, that you’re lulled into a heavy hypnosis, the musical equivalent of being buried under large sponges full of cough medicine. And then you discover the nuances; the understated solo in the midst of the bombast, for instance.

There is a psychedelic drone element running through the whole album, reminiscent of some of White Hills’ work or even the brilliantly dead-eyed stuff from Jason Pierce’s pre-Spiritualized outfit Spaceman 3. The droneage is not as pronounced as Domkraft’s debut, released less than a year before this one, however – parts of that were almost like Fu Manchu covering Can – but it is there and it is good.

If ‘Rift’ fails to lure you into a time-bending trance, then the mostly instrumental ‘Meltdown Of The Orb’ will do so. Up until the 5min 50sec mark anyway, when one of my favourite bits of the album will jolt you awake: the band are locked into a pulsing drone when all of a sudden there is a kind of ‘ta dah, look at me!’ riff, everything stops for a fraction of a section, then drummer Anders Dahlgren sets things off again with a single stomp on the kick drum – you can’t help but grin.

After a brief interlude, ‘Red Lead’ forces us to sink even further into the riff – which Wegeland implies is completely intentional. He says of Domkraft’s slavish dedication to their songcraft: “The foundation is always the same – repetition and volume. You’ll eventually get sick of every melody, but grooves are forever.” Amen to that. It is seldom more evident than on ‘All Come Hither’ and ‘We Will Follow’, which each boast a gorgeous, crushing riff. The latter’s has more of a bounce to it, if you’re going to be picky, and it brings the album together nicely. The two songs bookend ‘Dustrider’, which is markedly coherent to the rest, in that it is a short, sharp face-slapper that sounds like it belongs on a Mad Max movie.

It is evidence that Domkraft’s influences stretch far beyond the Iommi Beginner’s Book of Doom Riffs. In fact the whole album is a welcome sign that there are bands willing to plug their muses into a massive fuzz pedal and feed us goodness, with no reservations about where, why or who the origins of the riffs are. Put it this way: they’re a Swedish doom trio, but not as we know it. And that’s a good thing.