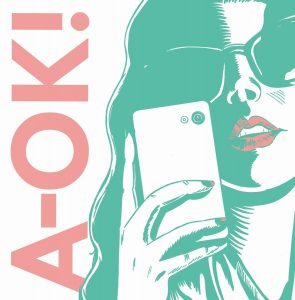 Groovy Californians Cosmonauts claim to be “too psychedelic to be punk, too punk to be psychedelic”, in actual fact they’re neither totally punk nor totally psychedelic but fall into the intersection of the Venn diagram that has 1990s UK Madchester in one circle, The Jesus and Mary Chain in another, with a healthy dollop of flannel shirted funsters Pavement thrown in for good measure. It’s nothing new, it’s nothing that we haven’t heard before – certainly not in the UK – but it is really good, and you will find yourself won over by the plucky lads from Salford Orange County.

Alright, alright – I’m being flippant – but it is rather bold music for a US state these days more famous for hard-rockin’ good-times; and for a group of folks who cite Spaceman 3 as major influence it’s no wonder they don’t feel as though they fit into any particular scene. I’m also being flippant because as you all know in the 80s and 90s, The Stone Roses, Charlatans, The Wedding Present et al, all repackaged a love of US surf music for a UK audience interested in grooves, lo-fi, and drugs (and hardly ever in that order) which itself was heavily influenced by the US-centric music-aping Beatles and Stones. It’s a natural conclusion that this decades old transatlantic conversation should find a natural conclusion in a band like Cosmonauts.

A-OK! is a very fine album, with a lot to recommend it. If you didn’t grow up in the 80s or 90s then you’ll find a lot on it to excite and inspire you. If you’re as old a me (and many are) you can’t help but think back to that particular epoch in time and compare what you hear to the bands that you listened to then. Of course it’s arguable whether The Stone Roses have done anything other than revisit their past lately, certainly anything new and relevant has long been lost in the constant round of greatest hits touring; Cosmonauts, however, really bring to life an album of great tunes in a way which is exciting for listeners old and new. Whether it’s The Byrds style jangle of ‘A-OK!’ or the lazy spaced out shimmer of ‘Party At Sunday’ the tracks here-in show virtuosity and originality, save for a few nods to David Holmes’ The Holy Pictures along the way (see Shortwave Communication and Cruisin’).

‘Be-Bop-A-Loser’ and ‘Good Lucky Blessing’ both have compulsive-grooves straight out of the C86 songbook. In fact, talking about C86, you really could imagine seeing Cosmonauts peering out of the pages of NME or Melody Maker – but then I’m harping back to the past and I really shouldn’t – this is a Twenty-First century band who really deserve some kudos for their music – and certainly in better places than those two snooty rags.

Now, I also mentioned Pavement at the top (yes, yes, The Past), which many of the keen eyed amongst you will have already noticed were not part of the acid dropping UK indie scene. And the reason I mention them here is that the lo-fi, head-nodding, kookiness of Malkmus and company – and indeed the some of the laid-back grooves of early Beck – shimmer across the surface of this record. It has what many of the UK bands mentioned above failed to have – that effortless, authentic West Coast psychedelic fuzzy-rock sense that the band from down the highway at Stockton CA had by the bucketful, and which Cosmonaut inhabit totally across the ten tracks on this long-player, check out ‘Discophilia’ if you need further convincing.