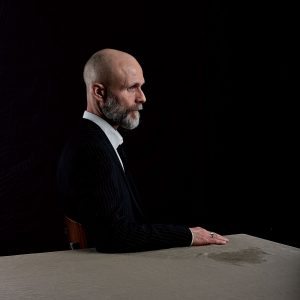 Tjaere + Fjer (I can’t even pronounce it) is the working name of Danish producer and musician Jens Christian Madsen. Madsen is fairly active in both the Copenhagen and Berlin underground electronic music scenes, so he comes to us – with his third album under the Tjaere + Fjer moniker – with more than a reasonable pedigree.

Voliere is a very polished product, a subtle blend of soundscape and experimental ambient/trance. At times it seems a little too clinical, too precise, but the quality of composition and creativity on display often make up for the times that the album doesn’t quite catch fire. It is, however, grown up electronic music for a thinking audience, at times drawing on influences such as Another Green World period Eno, or late Virgin period Tangerine Dream, and Madsen is a clever enough guy to tip his hat to his predecessors without being overpowered by them.

What I do admire about Madsen is his sense of the cinematic in music, and listening to the album put me in mind of composers such as Will Gregory – the compositional force behind Goldfrapp – Like Gregory, Madsen provides an ever unfolding canvas of sound which not only draws you in with the whole picture, but provides enough small details to perk your interest and make you think. Voliere is a record that needs room to breathe, and is often all the better for giving yourself the time and space to do so. If, however, you prefer a bit of bouncing off the walls in your electronica Tjaere + Fjer have that covered too; Any second now and Faster than light provide pulsating, pounding thrills.

For me, by far the most interesting tracks are the gritty slow throb of ‘Subjoy’ and the gorgeously swelling idyll of ‘Beech Woods’. The latter evokes so completely, a walk through a sun dappled Danish forest in late summer that you can almost smell it and touch each fern. Madsen also eerily taps into our emotional synapses too – ‘Party’ captures the awkwardness we all know of having to leave something good and having to face up to the reality of life.

Now, whether or not it’s because I’ve been listening to too much Math Rock lately, I found Voliere something of a tricky album to get my head around – but then again the river can run just as beautifully slowly as it can through the rapids. I’ll definitely revisit Voliere in my less hyperactive moments.