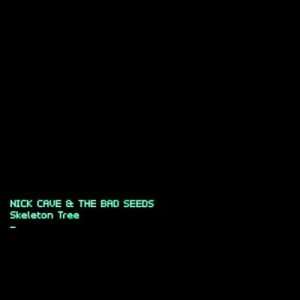 Released on September 9, 2016 via nickcave.com

WB Yeats writes in his poem Easter, 1916 that “a terrible beauty is born”, a line now ingrained in the English language as a shorthand phrase for something with a morbid fascination, something we are compelled to experience, that we can’t break away from, that holds our attention completely. Skeleton Tree has something of that nature about it. We all know the tragic circumstances of Arthur Cave’s death in 2015, just as the sessions for this album began. We can’t help but feel a mawkish, voyeuristic even, curiosity about this record, we can’t tear ourselves away from the circumstances in which it was recorded, we feel a very human need to understand how the events were filtered through Cave and into these eight songs. Every review you will read about this album, will address it in these terms.

Yet terrible beauty is what Skeleton Tree is and delivers. Cave is our modern day Yeats, and – as he always does – he brings classical allusion to make kitchen sink drama seem epic, and yet makes the day-to-day emotions of our lives seem grand and Biblical. The title of the album itself suggests a juxtaposition of life (the tree) and death (the skeleton), and we often find Cave caught between the two states throughout this work.

Nick Cave has always written emotionally dense music, he’s always been a bit of a slippery character, lyrically, drawing us in with his storytelling – sometimes laconic, other times bombastic and in some ways Skeleton Tree is no different from anything else Cave has written. Long term fans will find much that is familiar, new ones will find the album a great place to start. And what I think I’m trying to say, in my own clumsy way, is don’t let the tragic circumstances behind this record weigh you down, or put you off, or build them into some kind of emotional barrier that makes you filter the music in a particular way, because this record – and I’m sure time will tell – will stand up to being one of Nick Cave and The Bad Seeds finest records, up there with the much admired Abattoir Blues / The Lyre of Orpheus.

How can any of us know, the deep and layered emotional strata of any family, and how they as a group, or as individuals, will experience such a seismic event. We’ve all lost people – that’s a bald fact of life – but there are as many manifestations of grief as there are humans on planet Earth. Each of us is at a remove from the epicentre of the events that shaped this record, and will bring very different baggage to it, different opinions, feelings, experiences. For some of us this will be a harder record to hear than for others. We hope though, that as a universal constant, music can communicate across some of these barriers.

What transforms Skeleton Tree from just another Nick Cave record, into an extraordinary Nick Cave record is not just the personal situation of the Cave family, but the utterly devastating way in which real humanity, warmth, love, despair, confusion, and to some degree acceptance flow out from every chord, note, and word. Also, this isn’t just a Nick Cave record, it’s a Nick Cave and The Bad Seeds record, and every word and lyric that Cave supplies is joined by the wonderfully sympathetic playing of Warren Ellis, Jim Sclavunos, George Vjestica, Martyn Casey, and Thomas Wydler, faithful collaborators and, frankly, in their current lineup The Bad Seeds appear to have a perfect psychic link for interpreting Cave’s musical vision.

Circumstances aside, Skeleton Tree, feels like a very different album. At times it seems reminiscent of Cave and Ellis’ soundtrack work. There’s a good deal of electronica seeped into the grain of the album. This in itself is a further evolution of the group’s sound from Push Away The Sky, and is reflective – albeit as far distant as we listeners are – of Cave’s mind. At times it jars and disturbs, but it is always the perfect accompaniment to Cave’s voice. His voice, often fragile, alternates from Cohen-esque dolorousness to Scott Walker style fragility.

The tone is subtly adjusted throughout each song as darkness descends. Gone is any of the upbeat, triumphant nature of records like Dig, Lazarus Dig!!!, absent is the mercurial yet engaging figure that stalked self-analytically through 20,000 Days on Earth, all that appears to remain is a paralysis from which these songs stagger and fall (musical themes, motifs and lyrics often repeat themselves, heightening this feeling). Like ‘Girl in Amber’, a particular example of this – a moment frozen in time – “I knew the world it would stop spinning now since you’ve been gone / I used to think that when you died you kind of wandered the world / In a slumber until you crumbled, were absorbed into the earth / Well I don’t think that anymore”, which is as bleak as devastating as Cave has ever been, and when the song finishes with its plaintive cry: “Don’t touch me”, it’s beyond heartbreak.

‘Magneto’ brings a pitch-black “Oh, the urge to kill somebody was basically overwhelming / I had such hard blues down there in the supermarket queues / I had a sudden urge to become someone, someone like you / Who had started out with less than anyone I ever knew” – such bleak lyricism is a trademark of Cave, but as we know from 20,000 Days on Earth that there are any number of Nick Caves. Which one is speaking to us here? The singer? The moody gothic icon we know so well from Henry’s Dream? Or the private human, the husband, the father? Is it a cruel irony that so much of Cave’s work is often about fathers and sons, or religiously The Father and The Son? I don’t have the answers.

But his other favoured themes – love, desire, also find a home on this recording and offer promises of the enduring nature of love through the gloom. ‘Rings of Saturn’, and the gorgeous ‘Distant Sky’ (featuring the talents of soprano Else Torp), speak of such tender love in the face darkness – “Call the Gasman / Cut the power off”, is as close as we get to WH Auden’s “Stop all the clocks” , and hits you with the same kind of punch. Cave’s flirtation with scientific themes is also on show – in ‘Anthrocene’ (recalling, in some ways, ‘Higgs Bosun Blues’), while the title track, ‘Skeleton Tree’, finishes with the repeating phrase “And It’s all right now”, offering perhaps a sense of hope. The skeletal trees we see in winter, return to life in the spring and so the cycle continues: grief changes shape, life goes on.

There can be no doubt that this record, and the accompanying film, One More Time With Feeling, were very difficult things to make and yet it seems totally necessary that they exist, that they are here of documents of a devastating period in the life of Cave and his family. He could, very easily – and I wouldn’t have blamed him for a second – have decided not to do anything at all. But that might have been true paralysis of feeling perhaps, and counter to the great creative spark that burns so brightly in this artist who writes so engagingly about all of human experience.