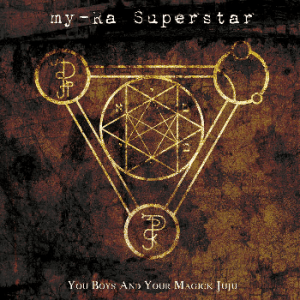 While the album title suggests an album of Screamin’ Jay Hawkins bad-boy blues numbers, the reality is much different as the Welsh punk-rock trio return with a new album for 2016, hot on the heels of 2015’s Some Of These Objects Are Cursed.

For a band where one third of them live in Spain – the rest in Swansea – this is something of a prodigious work-rate.  You Boys And Your Magick Juju is, however, a step up from album number two. The shoot-from-the-hip production values are still intact, as is the joyful cynicism as the band pass judgement on the world they see about them, but there’s also an increasing leaning towards classy, lo-fi, dirty rock – something which the Welsh seem to excel at – and a maturity in the song-writing.

‘The Narcissist’ kicks the album off in proper snarling fashion – there’s quite a lot of snarl here in fact which is reflected in other album tracks like ‘King Curmudgeon’, ‘The Enthusiast’, which brim with a snotty energy that gives the finger to The-Powers-That-Be.  Indeed our reptilian masters, or The 1% clearly are worried because as the band point out – ‘The Illuminati Are Bugging Me’ – one of the most fun songs here which lurches from genuine concern about the surveillance state to the ultimate cartoon paranoia of “I hear a tap drip / clearly been planned“ to deprive the singer from sleep.

It’s clear that this is a band beginning to get comfortable in their skin from the swagger of ‘Ambivalent Love’, through to the maturity of ‘Desert Sharks’ and the “I love you more than cigarettes” refrain of ‘Cold Earth Calls’. There’s a real sense here of a bunch of guys that are beginning to believe in themselves – such a pity that the geography challenges make it difficult to gig more as I feel certain this is a band that could really grow a following.

Also on show is an emerging line in experimentation, drawing us away from white-boy punk and into more Middle-Eastern climes with a general lyrical lean towards the Eastern Mediterranean and North Africa – a Moroccan flute makes more than an occasional appearance. There’s also the introduction of analogue synths in the wonderful ‘Origami Taser’. Musically the band are a really tight unit, clearly there’s a sense of a group of friends who know each other well enough to blend comfortably together, and although clearly influenced by post-punk no-wave bands such as Wire, there’s clearly a Brian Jones era Stones mysticism which is working its way out between the album’s sleazy riffs.

So in summary – You Boys and Your Magick Juju is something of a positive evolution for my-Ra Superstar, and I think it’s only a matter of time before they give us something totally damn hot. Ones to watch. Although, to be fair, the Illuminati already are…