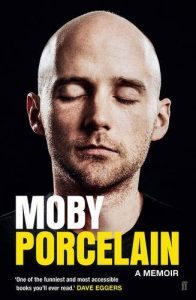 I have to admit to only knowingly owning two Moby tracks: the first is a curiously downtempo reading of Bad Brains’ ‘Sailin’ On’ on a tribute album otherwise inhabited by metalcore bands; the other a collaboration with Mark Lanegan (a collaboration which now extends to Moby offering the foreword to Lanegan’s own upcoming tome).  So, why spend a long succession of evenings reading 400-plus pages of memories from someone I have little in common musically-speaking?  The answer lies in Moby’s inherent ability to be an interesting person throughout the years where he has been making his way through the public consciousness.

It is to the reader’ship’s benefit that he was talked into writing the book himself rather than speak through a ghostwriter, his literary agent pointing out that as a descendant of Herman Melville (whose most famous character lends Moby his name), he should at least have a crack at writing Porcelain himself.  Thanks to this decision, we have a rather weighty volume divided into five distinct chronological sections and almost sixty distinct memorial chapters, each telling its own story and seemingly triggered by the most innocuous of objects if each chapter title is any indication.  The overarching period covered is a strange and formative one, as it catalogues his many rises and falls, ending just as the titular song finally cements his position as the renowned artist he’s regarded as today.

There is the briefest of backstories detailing his childhood, where one single paragraph in the opening four pages shows us exactly where he’s come from, and then we’re sprung forward from 1976 to 1989 and a squat in an abandoned factory.  From this point, we’re treated to Moby’s somewhat unique worldview, a world in which he’s perpetually interested in his surroundings and his place within them, and how he always seems to find – at least in hindsight – a bemused levity to all that was going on around him; whether it’s an EMT telling him that the crackhead who jumped from the building opposite survived due to the massive pile of garbage stacked outside his new digs in New York City or the roommate going as far s buying petrol to burn Moby in his sleep but then gave up because his door was closed, it’s a catalogue of the strange and dangerous all met with the same “yeah, so this happened…” charming deadpan throughout.

Because of his obvious charm and way with words, it’s easy to root for the author as he chronicles his steady rise through clubland and accidental headline sets to an appearance on Top of the Pops as his slightly detached manner, tempered with a strong self-belief throughout, puts the reader firmly on his side.  This slight detachment does also prove to be a crack in his armour however, as whenever interaction with other people – particularly girlfriends – is involved, as his hitherto charming awkwardness gives way to something altogether colder.  Later chapters, especially during the section detailing a period the hitherto-teetotaller calls <em>Alcohol Enthusiast</em>, detail a time where he still has a wide-eyed appreciation of everything that is going on to him and around him, but it’s also a time where control is lacking and his assured rise to stardom is somewhat hampered, mostly by himself.  This whole section is very strongly-written and vividly-remembered, the bemusement is still there as always but there’s one or two chapters contained within where you’ll stop cheering for Moby and actively feel anger and disappointment; and I suspect that this is exactly what he wants us to do, possibly because even at his worst, he still gives the impression that he’s having the funnest time of his life, only coming to a halt when Real Life gets back in the way.  Even then though, tragedy is still coloured in with an “oh, Moby!” sense of the absurd only being particularly applicable to him.

The downward trajectory is halted in gloriously hokey fashion that would be unbelievable if the previous few hundred pages made it make all the sense in the world, and we’re ushered out of Moby’s memories with an almost palpable swish of an “and the rest is, well, you know…” ending, but we’re left happy.  Happy because the hero of the story makes it out of the strangest and silliest of times, happy because we’re left with an ocean of music to reminisce upon or discover (an accompanying CD is available, detailing milestones of his own making plus tracks of those who influenced him or which are mentioned in his tale), and ultimately happy because this strange rollercoaster section of a life is so obviously told with a self-deprecating grin throughout, because for all its ups and downs, Porcelain is a very funny book.