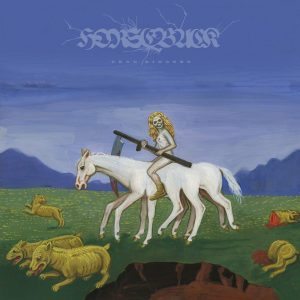 Released on August 12, 2016 via Relapse Records

It is difficult – or pointless – to try and pin down what to expect from a new release by Horseback, the Chapel Hill-based project of Jenks Miller. Since 2010, Miller has been using the vessel of Horseback to transmit sounds from blackened noise and ambience to plaintive meditations on Americana. Each mutation of the project has used a broad palette of sounds from far-reaching and disparate corners of extreme music. Miller has done what several experimental/noise artists have before in his own way and taken his boldest step forward by doing what may have seemed impossible in his earlier recordings. With this album, Miller narrows the scope of Horseback while multiplying its impact exponentially.

It is a common narrative in experimental music – that album where an artist seemingly reigns in their wildest impulses. There was a thrill to the dizzying turns in Horseback’s earlier works, but while the sound here is less extreme, it is deeper and more meditative. Miller mines the depths of drone, krautrock and dub to create his own vision of heavy music – one that is admittedly not often very heavy upon a first listen especially with the notable absence of Miller’s black metal rasp from previous efforts. Comparisons have been drawn to Neil Young – and on tracks like ‘In Another Time, In and Out of Form’ and ‘The Cord Itself’, that reverb-drenched blues-damaged guitar does brush against similar cosmic rock tendencies. The album also has well-gestured and individualized nods toward King Tubby and The Scientist with skittering and strange delayed drums and also a familiar hum that feels akin to post-rock meditative icons such as Tortoise or Trans Am in their most blissed out moments.

That meditative core is crucial to experiencing Dead Ringers as a cohesive piece. Similar to Miller’s work in the past – especially an album like Forbidden Planet whose each track is a moving part in a single machine – Dead Ringers works best as a single piece. While each track could stand alone in most casual sat-down “check this out” moments, each one builds on the other and the interplay between them all brings out the complexity of an otherwise repetitive, trancelike sound.  Once the closing track, ‘Descended from the Crown’, breathes its last dubby gasps the listener feels a sense of completion. In many ways, while it is the longest and most ponderous track, ‘Descended from the Crown’ feels like a culmination of the album. While it is the most hushed piece on the album it is also one of the more tension-filled tracks, coiled around a sort of dread that ultimately unravels into release. Sparse stabs of percussion echo and rattle around a drum part as essential as a heartbeat and the ringing chimes of guitar that echoes from the American plains.

This is the sort of work that makes a healthy argument for an otherwise quiet work being classified as another form of heavy. A spiritual sort of heavy. A heavy that weighs on the mind as it lifts it up.