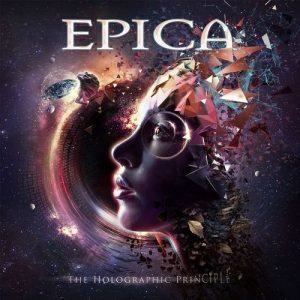 It seems Dutch symphonic metal veterans Epica have got a new lease of life. Since joining forces with producer Joost van den Broek for their last album, The Quantum Enigma, the band have refined their already formidable sound and feel reinvigorated. Not that they had become tired: the seemingly indefatigable band have turned in a new studio album roughly every 18 months since forming in 2002, notwithstanding various other projects. The Holographic Principle is the band’s seventh album, and is as grandiose, thoughtful and individualistic as long-term listeners have come to expect.

Whilst many other symphonic metal bands tend towards a slower, more filmic feel, Epica embrace the spirit of technical death metal with evident glee; whilst there’s plenty of symphonic bombast, you’re never too far from two-wheels-on-the-road riffing and decidedly intricate instrumental sections filled with time signature changes, all propelled along by drummer Ariën van Weesenbeek’s warp-speed playing. For the newcomer to Epica, the general effect can be one of a firework display where all the fireworks go off simultaneously: whilst there are oases of calm in their music, Epica’s sound is… well, epic. This is incredibly dense and highly detailed music, as carefully crafted as any classical opus but as heavy as a big bag of spanners.

Epica’s success is not just built around huge orchestrations and even bigger riffs, however. The band provide a feast for the senses, but their appeal is not merely sensual; they do their level best to feed the head as well as the heart. Their back catalogue is as notable for its esoteric lyrical and thematic content as it is for mammoth riffs, and so it is with The Holographic Principle. In many ways, this album picks up right where The Quantum Enigma left off, dealing with the nature of reality and our perception of the universe that we inhabit. It could perhaps be best summed up as a logical extension of Anaïs Nin’s idea that “we don’t see things as they are; we see them as we are”. And so the album tackles topics as diverse as manipulating dreams to create new realities, the conflict in the Middle East, the nature of artificial intelligence, the current refugee crisis and the mathematical foundations of the universe. If you’re looking for songs about getting lagered up on a Friday night, it’s safe to say that you’re probably looking in the wrong place.

Things get off to a suitably cinematic start with ‘Eidola’, the latest in a series of album-opening instrumental pieces that serve as overtures for the body of the album that follows. This is a well-worn trope within symphonic metal, but it has to be said that Epica do it especially well. The orchestral stabs and martial drumming serve well as a warm-up for the main event, and the first few tracks set a relentless pace. ‘Edge Of The Blade’ bursts from the gates like an Olympic sprinter, a cavalcade of jagged riffs with a contrapuntal soaring chorus, whilst ‘A Phantasmic Parade’ is a prettily anthemic track that thunders along quite nicely until the middle-eight, a truly ferocious interlude that sits upon a seismic bed of ferocious death metal drumming, Weesenbeek’s limbs a positive blur. Before you even have a chance to catch your breath, the heavily progressive ‘Universal Death Squad’ arrives, it’s orchestral fanfares buffeted by a sea of gnarly riffing and a succession of dizzyingly audacious solo spots.

It’s only when the album reaches its midpoint that the band allow themselves time to slow things down somewhat; even then, songs that are entirely typical of the band are happy to throw some curveballs to the listener. The Middle Eastern-themed ‘Divide And Conquer’ is quintessential Epica, but the largely instrumental mid-section sees the band experiment with a doomy, slow-mo guitar interlude so grindingly intense that it’s almost a relief when the song manages to escape its gravitational pull. Opening with trembling strings, ‘Once Upon A Nightmare’ sees Epica in ballad mode, but this examination of the loss of childhood innocence is too forlorn and bruised to fall into the trap such ballads often fall into, that of veering too close to the stereotypical 80s power ballad. Simons is in spectacular voice for this one – not that she disappoints elsewhere, but she’s often at her best when her vocals are given the space to demand the listener’s full attention.

Typically, the album saves its more unpredictable and progressive fare until the end of its running time. ‘Ascension – Dream State Armageddon’ is every bit as apocalyptic as you might expect from a title like that, its running time filled with a tide of pummeling riffs, orchestral pyrotechnics, blast beats galore and Jansen’s baleful grunts; the Eastern-tinged ‘Dancing In A Hurricane’ is as affecting in its humanitarian outlook as the motivational ‘Tear Down Your Walls’ is positively feral in its gimlet-eyed race for the finish line, whilst the swooping melodies and call-and-response vocals of ‘The Cosmic Algorithm’ are a memorable twist on the band’s familiar stylings. The coup de grace – as has become traditional on Epica’s albums – is saved for the grandiose title track. Clocking in at 12 minutes, this closing track sees Epica at their most unabashedly progressive and it certainly embraces that ethos, picking its way carefully through a series of varied set-pieces – it’s a cliché, but the track is a musical journey in its truest sense. Latin chanting, piano, Delahaye’s hugely emotive soloing, titanic riffs, Jansen and Simon’s characteristic vocals and, one suspects, the kitchen sink, are all deployed against a kaleidoscopic orchestral backing that ebbs and flows with effortless grace – it is quite simply one of their greatest achievements to date. Chances are that you will feel drained after your first listen, albeit in a good way.

Whilst overall the album does undoubtedly cleave closely to Epica’s signature sound, there are little flourishes that demonstrate that they are continuing to add new armaments to their musical arsenal. The arrival of God Dethroned’s Isaac Delahaye on guitar for their fourth album, Design Your Universe, saw them embrace the guitar solo in a way they had previously not done, and Delahaye’s virtuosity in this area has helped to colour their output ever since. As filmic as their music already was, Delahaye’s highly emotive soloing has lifted it still further, and that process continues here. In such a densely populated environment, it could be argued that there is no space for guitar heroics, and yet Delahaye finds room for several dazzling displays, his pyrotechnical style literally the icing on the cake.

The biggest experiment here, however, is the extensive use of real instruments. On previous records, most or all of the orchestration has been synthesized; here, the use of synthetic instruments has been eroded to a bare minimum, with real orchestration taking its place. It’s testament to the band’s – specifically keyboardist Coen Janssen’s – skill with their synthetic orchestrations that the difference is less marked than might be imagined, but there is nonetheless a distinct and pleasingly organic feel to the orchestrations this time around that speaks to just how worthwhile this decision was. Epica have never sounded bigger or more powerful, and it testament to producer van den Broek’s taste and skill that the album never lacks for sonic clarity. By any measure, this is an astounding piece of production work, and it’s not hard to see why the band have elected to keep working with him.

With The Holographic Principle, as with The Quantum Enigma, there is a sense that Epica have managed to perfect their existing sound. The question has to be, given that, where do they go from here? Epica certainly don’t appear to be a band content with resting on their laurels, so it may well be that they are about to undergo another stage in their development – a mouth-watering prospect for their growing legion of fans. In the meantime, The Holographic Principle serves as a defining statement, a hugely enjoyable milestone for one of metal’s most ambitious and creative bands.