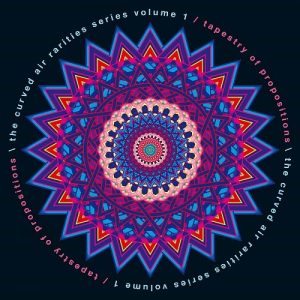 1970s progressive rock legends Curved Air started a revolution without realizing it. When they formed in 1970, they were a true rarity: a virtuosic progressive rock band with a female vocalist. Then, and for years to come, progressive rock was perceived – wrongly, of course – as exclusively the pursuit of furrow-browed muso hippies who probably wouldn’t know what a woman was if she was dropped on them. Curved Air’s frontwoman Sonja Kristina would spend the next six years doing her level best to destroy such small-minded preconceptions, aided and assisted by a band which, despite a sometimes frustratingly fluid line-up, would serve up some of the decades best progressive rock. Kristina cut an imposing figure on and off-stage; her powerful voice and flamboyant style turned her into an icon, and a pin-up for progressive rock fans. It also attracted a crossover audience that without her, the band would almost certainly never have enjoyed. In the process, Kristina inspired a generation of female rock fans, who realized that progressive rock was not the cliché it was so often portrayed as.

Such was Kristina’s impact and legacy. So perhaps it’s not surprising that in many ways, Kristina became Curved Air. The constantly shifting line-up probably played some part in this, but as usual, the vocalist is the focal point for the audience, and Kristina’s palpable charisma and key role in the band’s writing ensured that she was perceived as the band’s sole irreplaceable element. The key presence of Kristina throughout the various iterations of the band, and as a constant after they reformed in the nineties, seemed to bear that out. But as always, the truth is not so simple.

There is another side to Curved Air, however – and it is that side that is examined on Tapestry Of Propositions, ostensibly the first volume in a series of archival rarities releases from the band. Rather than studio off-cuts, out-takes, demos or alternate versions, Tapestry Of Propositions puts the Curved Air live experience under the microscope. The album’s title is quite literal: the album contains just one song from the band’s oeuvre: the fan favourite ‘Propositions’, from the band’s classic debut album, 1970’s Air Conditioning. The anti-war track is largely instrumental: Kristina’s powerful, abrasive vocal forms two brief bookends to the song, which is primarily made up of an improvised jam. To their credit, rather than adopt the studio version of the song as a blueprint to replicate every time the song is performed, the band rarely play the song the same way twice. Rather than fill a CD with multiple versions of the same song, Curved Air’s very own Robert Norton has painstakingly edited together numerous performances of the song by the current line-up to form one seamless, epic performance of the song that spans the entire album.

On paper, it’s an interesting experiment. In actuality, it is likely to sharply divide listeners. The kind of improvised ensemble playing on display here tends to be accused of the sin of self-indulgence – of “wankery”. If an hour of improvised jamming sounds interminable to you, then chances are this record is not for you. However, for devotees of the band, and for those who enjoy the cut-and-thrust of improvised music, this record is an unmissable treat. Curved Air, for all their legendary status, are perhaps one of the mostly unfairly overlooked and underappreciated ‘classic’ progressive rock bands. Perhaps they are seldom mentioned in the same breath as Genesis, Yes, King Crimson and other such luminaries because they managed to crossover into the mainstream of the singles charts early on; perhaps they simply weren’t as flamboyant or experimental; perhaps there existed a certain degree of sexism. Whatever the reasons, the fact remains that Curved Air’s back catalogue is packed with classic prog tracks that rarely seem to get mentioned alongside the usual big names. The musicians that were Kristina’s allies in Curved Air over the years were no slouches: from the explosive violin of Darryl Way and Paul Sax, through the highly creative drumming of Florian Pilkington-Miksa and Stewart Copeland to the chameleonic guitar of Francis Monkman and Kirby Gregory – amongst many others – Curved Air’s ranks have been blessed by a succession of truly incredible players. The band’s latest line-up is no exception, and here they are given ample space to demonstrate both their instrumental chops and near-telepathic musical communion.

In over an hour of pure musical improvisation, without much in the shape of formal structure to anchor the listener, it’s easy to become lost, hypnotized by the unpredictable nature of what is happening. Even to aficionados of improvisation, the first few playbacks of this album are a dizzying and hugely enjoyable ride, but are unlikely to serve up particular highlights. The tracks – titled simply for where they were recorded – ebb and flow, merging as intended into one lengthy piece. The only constant here is the staccato riff that brackets each improvisation, and also serves as a means of connecting the chunks of music together in a suitably unobtrusive way. Repeated listens bring out a welter of highlights, however, each musician taking their own turn in the spotlight without any one of them overwhelming the others or stealing the spotlight on a regular basis. This is a musical democracy; if there are egos at play, they are kept rigidly in check. Having said that, Robert Norton’s elaborate keyboard solos are invariably a treat, alternately languid and crazed, occasionally on the verge of disintegrating altogether; similarly, Pilkington-Miksa’s playing is as explosive as ever whilst remaining the heartbeat of the whole – his ability to leap between wildly oscillating time signatures is spellbinding throughout.

Tapestry Of Propositions is perhaps best approached as an unusual and intriguing official bootleg. Sonically it tends towards audio verité rather than succumbing to the polish of the studio, sounding more like an exceptional audience recording than something that’s been recorded to multi-track and subsequently polished to a shine in the studio. Sharp-eared listeners will note slight shifts in EQ that betray changes of venue between some of the sections, but for the most part these are imperceptible. The result is pleasingly live and direct: crank this record up and it really is just like standing front and center at one of Curved Air’s shows whilst the band play, dancing along a musical precipice. And that is reason enough for this release to be positively essential for Curved Air’s dedicated fans. For everyone else, Tapestry Of Propositions is a glimpse under the band’s bonnet, a chance to see the machinery in action, freed of all constraints. One can only hope that recordings like this, unfettered and unapologetic, help to cement the legacy of Curved Air as more than just a vehicle for Kristina: whilst her talent is undeniable and more than worthy of the multifarious praise she has received over the decades, there’s more to Curved Air than her titanic voice and mischievous, intelligent lyrics. As always with Curved Air, there’s more going on than meets the eye. Even after all these years, there’s still plentiful magic at play. Progressive rock historians, take note.