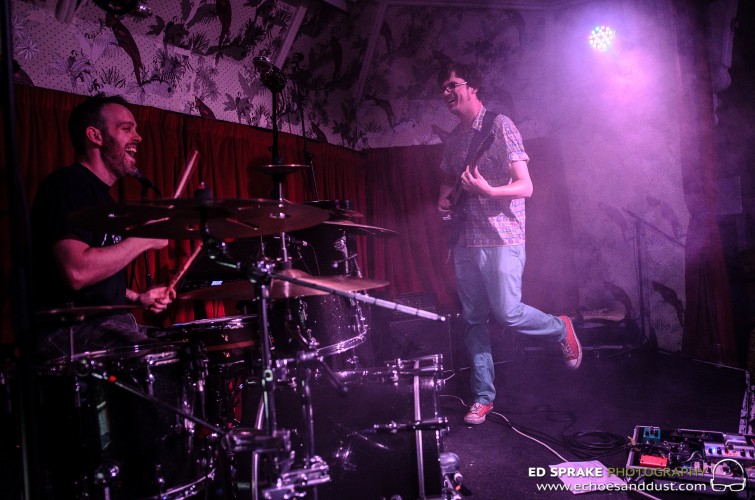 Cleft, also known as guitarist Dan Beesely and drummer John Simm have decided to call time on their five year career. When forming a band many people might decide to hang on and look for a bassist or a singer to form their band, rather, they decided to make it as a two-piece. In John’s words “no one will  listen to this shit…”. But listen they did. A combination of talent, huge riffs, tight and creative drumming and some general good humour and a willingness to not take themselves too seriously making for a good combination.

The pair released two EP’s in 2012; Utter and Whale Bone followed by the full length LP Bosh! in 2014. Their swansong, Wrong was released in 2016. They have decided to call it a day, citing that the project has run it’s course. As a fan, I, as I’m sure many others are, am disappointed but realistically when the spark of creativity or ideas run dry it is time to move on to other things.

The boys have seen somes highs, ArcTanGent 2015 and tours with Vennart and Knifeworld and around Europe and lows, Dan’s health issues, over the years. All the while being very down to earth and seemingly surprised that people are willing to pay money to go to see them.

The Deaf Institute, which is a venue I seem to spend most time in, was sold out and full of anticipation for the evenings entertainment. The atmosphere lively and friendly, the venue being the intimate place that it is encourages such a feeling. Musicians tend to wander around the place freely. After the political upheaval in the days before I think many people were looking for a bit of old fashioned escapism.

Opening the evening’s music were Body Hound, the Sheffield based math/prog/metal four piece. Body Hound have an interesting sound, typical math rock in places, but with a certain hint of metal. Apparently influenced by Meshuggah, without the crazy low tunings. Music this complex takes time to craft, not to say this band aren’t talented but maybe lack some of the catchiness of the other bands playing this evening. 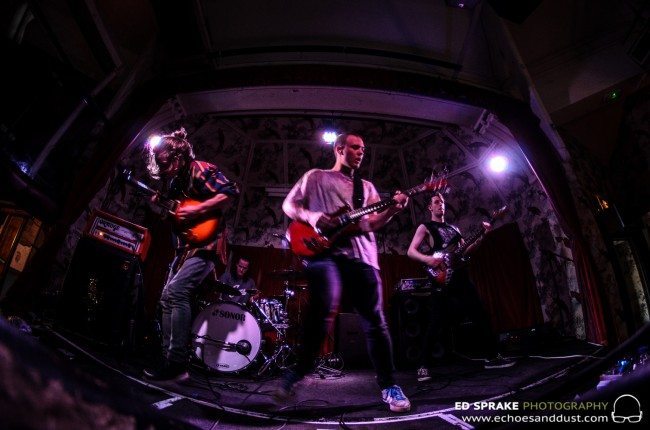 Next Alpha Male Tea Party, Liverpool based instrumental, prog-rock-ish three-piece. Guitarist Tom Peters, starts things with a huge slab of thick guitar tone. Apologies for getting all guitar-geek but Tom’s light blue Tele, hero-level pedal board and Hayden amps are a stunning combination. His massive riffs, however don’t overpower Ben Griffiths sharp and cutting bass tied together by Greg Chapman’s tight and precise drums. AMTP are loud, and raucous, the energy visibly coming off the stage. This is not to say the music is rough and ready, there is nuance to their playing. I’ve seen these lads a few times now and this evening they were confident and energetic, looking comfortable playing. Their sounds is thick and heavy, belying that fact of  them being only a three-piece. The energy on-stage being repaid by the crowd, by this time on a Saturday night the beer flowing and the more popular tracks getting the crowd going. AMTP have the honour of having possibly the best track title, ‘You Eat Hummus, Of Course You Listen To Genesis’ closely followed by the new track ‘No One Had The Heart To Tell Him He Was On Fire’. Great gig and a fitting warm up to what was coming up next. 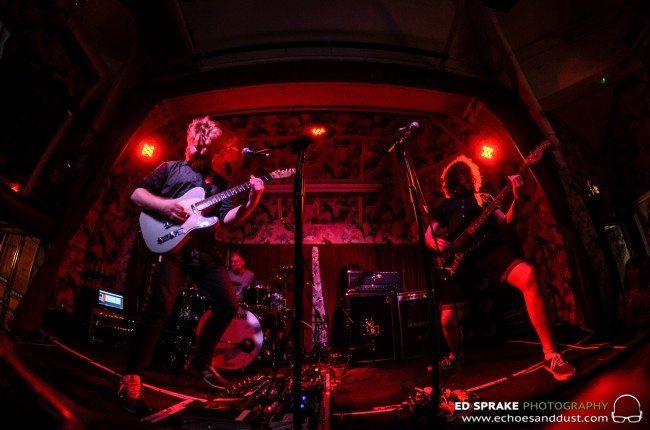 After a period of frantic cable plugging in a cymbal fitting (no luxuries such as roadies at this gig), Europe’s Final Countdown came over the PA, of course, in true Cleft style, cutting out just before the crescendo. Cleft soon crashed into their intro track. John standing over his kit and Dan, relaxed with a half-smile, cracks into a flurry of riffs. The pair, look comfortable, their on-stage chemistry would be the envy of many a band. The tracks, loud and heavy at one moment and subtle and quiet the next. They are a pleasure to watch play, well drilled and relaxed. Bursting with energy and creativity. As complex as the music is it is still memorable and Cleft never miss a beat. Dan wrestling with a pedalboard full of effects (although not quite as impressive as Tom’s) would be enough to contend without the thousands of guitar parts. 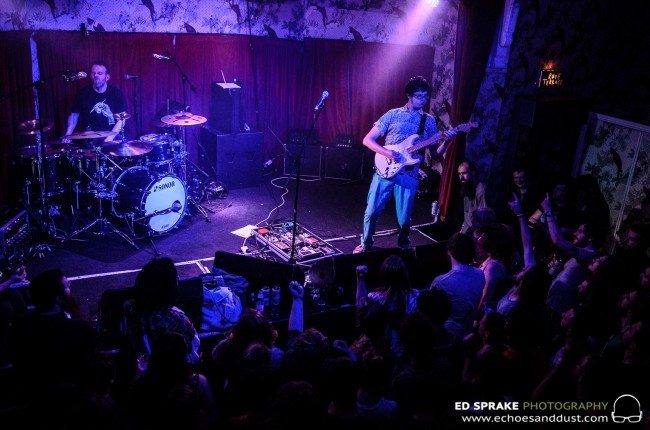 I think the intention was to play the back catalogue in order, Dan mentioning that they got bored and just played what they wanted to. Evidently many friends of the band were in attendance and demonstrtated the banter . For their one song with vocals, original vocalist Matt Franco joined them on-stage. Energy and spirits were high. Dan actually, albeit reluctantly, crowd surfed. Cleft finished the evening to a rapturous chorus of clapping and cheering.

A good evening, a great atmosphere and some very talented musicians on-show. Although a genre that will never make the mainstream it is good to see so many people crammed into a small space enjoying the evening. The end of an project for Cleft and hopefully a continuation