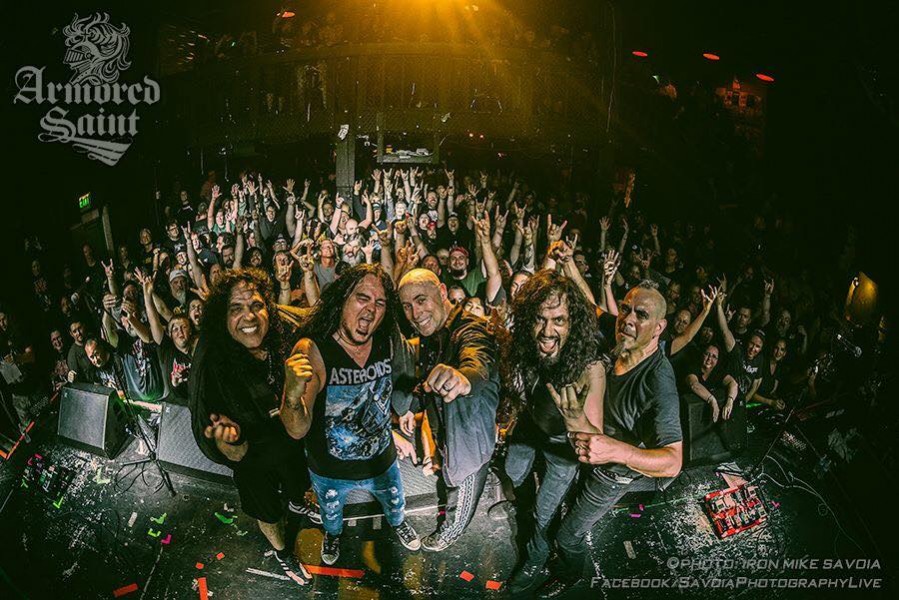 Armored Saint arrived in London for their only date in the UK this year, at the Camden Underworld. As lead singer John Bush said, it was a “rehearsal” for the festival dates the band would be setting off to do in Europe subsequently. The calls from many of their UK fans to extend their visit may not have materialised (especially because this is a band who limit their touring schedule anyway), but it did at least mean that there was a great deal of excitement leading up to the band’s appearance and the Underworld was packed out as a result. Armored Saint may not be as high profile an act as many of their trad-metal contemporaries who started life in the 1980s, but nevertheless the atmosphere of the venue before things got started shows what a dedicated bunch their fans are, so it promised to be a good night for all.

Having said that, the turnout of people down at the front for the opening support band Dendera was still relatively modest. However, the five-piece act from Portsmouth certainly made the most of their opportunity as they powered through their 30 minute set to the delight of those of us who had gone to check them out. You could tell that most of the people there didn’t know who Dendera were beforehand, but the powerful songs and tight performance clearly won several people over. They sounded excellent with technical guitar playing, a flawless rhythm section and a frontman in Ashley Edison who has a terrific vocal range and knows how to make full use of it. Their performance however was a little awkward in places, as the small stage seemed to confine them a little, which evidently took them some getting used to. Hardly surprising perhaps for a five-piece, but it did mean that the band lacked the presence that would have made their performance truly memorable. Nevertheless, Dendera were well-chosen as openers for the show, as they put in a stellar performance with the right energy levels to get the crowd moving and get the evening started off well.

The expectation levels were noticeably turned up a notch for Savage Messiah who clearly had much more of a following with Armored Saint’s crowd. This may have been because of the fact that they’re a local group, but far more likely it’s because of their impressive live performances which they showcased for us this evening. After having just come off from a string of dates with fellow thrash metalers Testament, confidence was clearly high and the band were keen to show the crowd what they could do. Turns out that’s quite a lot as every song they played was met with great enthusiasm by the audience who were either singing, moshing, headbanging or any combination of the three. Savage Messiah really do have everything you would want from a metal band. Killer riffs, pummelling rhythm section and a frontman in Dave Silver who works the crowd very well indeed. His duel soloing with fellow guitarist Sam S Junior was a real delight as well as the pair of them showcase the full range of their abilities. Savage Messiah have been making something of a name for themselves in the British metal scene recently and I can certainly tell why. Although what they do is not exactly anything you haven’t heard before, they certainly know how to do it well.

The anticipation for Armored Saint‘s arrival by this stage therefore was palpable and the crowd exploded into life upon the band’s entry to the stage. It immediately became clear as they got things going with the title track off of their most recent album Win Hands Down that as good as the bands before them undoubtedly were, things were about to get taken to a whole different level. Perhaps it was their experience shining through, or perhaps the high levels of expectation worked in their favour. Either way, it was a monstrous performance all round, with a set-list composed from the full range of Armored Saint’s discography. Every song stood up well against the last, but ‘Last Train Home’ and ‘March of the Saint’ garnered a particularly enthusiastic response thanks to their classic status. I was equally as impressed though with how newer songs such as ‘Mess’ in particular were performed. Every member of the band was on song. The rhythm section of Gonzo Sandoval on drums and Joey Vera on bass didn’t put a foot wrong all evening and guitarists Phil Sandoval and Jeff Duncan alternated between lead and rhythm parts superbly with plenty of excellent riffs and solos for the crowd to enjoy. However, it was frontman and former Anthrax lead singer John Bush who really stood out for me. Armored Saint’s songs aren’t exactly written to give their singer an easy time of things but Bush sounds just as good live as he does on record regardless. His powerful voice filled the venue from start to finish and he made full use of his impressive vocal range throughout. He holds up admirably as a frontman too, keeping the audience’s attention and getting us all laughing, particularly in his response to an unforeseen wardrobe malfunction.

For a full hour and a half, Armored Saint pummelled our eardrums into submission with their fantastic riffs and pounding grooves, giving any new fan an excellent sample of their back catalogue while giving any longer-standing fans of the band a well thought-out blend of classic tracks and hidden gems. The band finished the main part of their set with one of their biggest songs ‘Reign of Fire’, which was gained possibly the most enthusiastic response of the night so far, though there were plenty of worthy candidates there. The crowd would not be silenced once they’d left the stage however and continued their chanting at full volume until Armored Saint returned with drummer Gonzo Sandoval at the helm to get into the spotlight for a bit, as thanks to the strange shape of the stage, he was practically hidden from view for the entire show. Just two songs were left in the encore for us to enjoy and both were taken from their first album as fan-favourite ‘Can U Deliver’ was followed by ‘Mad House’ to round off an evening where the Underworld certainly was transformed into a ‘Mad House’ courtesy of a stellar Armored Saint performance. Although they don’t have as full a touring schedule as most other bands, Armored Saint proved at the Camden Underworld that they have the personnel and experience to put on an excellent show. Even if it is only a rehearsal.