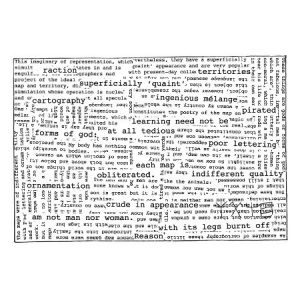 Ijereja is several things at once; it’s a fascinating exploration of the processes of composition, and where these processes begin and end (with the composer, the musicians; even the listener?) and an examination of music as a uniquely boundary-crossing phenomenon, belonging simultaneously to time and space, to the composer, performer and audience. It’s also, somewhat anomalously, an album, a recording consisting of one fifty minute piece, sometimes described as an opera, but comprised as much of speech, ambient noise and found sounds as of (somewhat minimalistic) music.

Discussion of the ‘processes of composition’ sounds ominously dry and academic, but in fact what lies at the heart of Lauren Redhead’s vision is the essentially mysterious, alchemical process of making music. The title Ijereja embodies both the preoccupations and the methodology behind the album. The word means ‘priestess’, but that meaning has reached its final (or at least current) form in a similar way to the music itself; that is, the word is believed to be the Mycenean Greek word for ‘priestess’, arrived at from a transliteration from the (relatively) later Cretan-Minoan script, linear b. In a telescoping of this organic process, the music of Ijereja is collaboratively created from Lauren Redhead’s unorthodox scores (which incorporate images, maps, bits of linear b. itself, etc) through a process of improvisational interpretation which makes each contributor part composer of the finished piece or, taking the title more literally than Redhead perhaps intends, the musicians and collaborators become acolytes to her role as priestess, where she presides over the alchemical ritual which is preserved on this album.

As an album, essentially stripped of the fascinating ideas which led to its creation, Ijereja is an unusual, sometimes unsettling work. Built from several live performances, electronics and some spoken recordings, it’s often barely musical as such. Instruments – notably Sarah Gail Brand’s trombone – are recognisable, but it’s a skeletal, non-melodic and often slightly dissonant piece. For the first four minutes or so of its running time, it’s like nothing so much as lying in a darkened hospital at night, listening to all manner of mundane but perhaps sinister goings on. Even when the piece becomes relatively more recognisable as music, it never loses this sense of disorientating randomness. A paradoxical mix of clarity and opaqueness, it is open to endless interpretations. A woman’s voice speaks throughout but although audible as sound, for the most part that speech is echo-laden and frustratingly just out of hearing with only occasional significant-sounding phrases penetrating the ambient noise, squeaks, possible footsteps, whines of brass and jabs of organ which make up the texture of the piece.

As a studio album, it would seem that Ijereja has reached some kind of set, final form, but as the above description suggests, it remains exceptionally hard to pin down. It feels intensely atmospheric, but unless listening to the piece in absolute silence, its texture and atmosphere are in fact likely to be modified by whatever noises leak in from outside and, until the strangely melancholy last section with its jazzy brass and relatively audible narrative (concerning maps) the atmosphere is pregnant, rather than explicit and what kind of atmosphere it is, is likely to depend as much on the listener as the music itself. But in fact this all feels appropriate; ultimately, Ijereja is enriched (or impoverished) by the listener’s reaction to it, an interaction which is actually central to all music, but which has been overshadowed by our preoccupation with composers and musicians as creators and entertainers, making music for an audience, rather than with it.