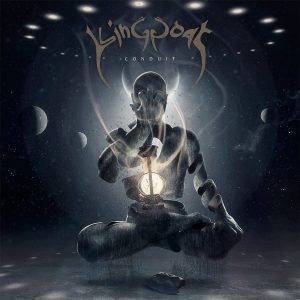 We need more bands like this in the UK and certainly ones like King Goat deserve some major attention – they’re sort of a more serious Evil Blizzard – but we won’t hold that against them.

On the surface, with a casual glance maybe, you’d be forgiven for thinking that King Goat (Anthony “Trim” Trimming: vocals, Reza G.: bass, Jon Wingrove: drums, Petros Sklias: guitar, and Joe Parson: guitar) are just another by-the-numbers occult soaked doom metal band. On the surface, with a quickened step maybe, you’d pass them by. But to do so would be to miss something of a treat. Conduit is the first long-player from the Brighton based thunder-merchants, and is something of a flag in the sand. I’m no major observer of the scene, but it seems to me that much of the doom scene is led by the US, with the UK following in its wake, which is odd considering we invented the stuff (Oh go on, of course we did, you ask any Brummie metal fan).

Yes, they’re steeped in occult imagery, and yes there are just five songs in the forty minutes or so running time – alright that’s prog-y not doom-y, don’t hate me for it – but there’s an intangible something that makes these songs, and this album, a cut above any other doom records you might have listened to lately.

Let me convince you: For a start there’s great atmosphere, ‘Flight of the Deviants’, which kicks off the whole shooting match is eerie and burdened with dark foreboding, building on a throbbing bass line and spoken voiceover before Trim’s vocals and the rest of the band kick in. They playing is excellent throughout and the excellent production means you can hear everything as clear as a bell. It’s like 2000AD’s Nemesis brought to life – “Be pure! Be vigilant! Behave!” Although I’m sure the “beware the mutant” voiceover comes from some film I’ve seen – I can’t remember which – bragging rights to you if you can tell me.

It’s Trim’s voice that really brings a trump card to the record – boy has he got a set of lungs – which put me in mind of the very lately departed Ronnie James Dio. Like Dio he has that soaring, operatic quality, which he can switch on at the drop of a hat. Now, don’t get me wrong, I liked Ozzy, but Dio was a proper singer, and so it is here for King Goat. ‘Feral King’, for example, really is Dio era Sabbath, if nothing else.

Funnily enough it’s not my favourite track here, that honour goes to the title track. ‘Conduit’ and the follow on ‘Revenants’, which show beyond anything what King Goat are capable of as a unit. These two tracks encapsulate all the dark energy of doom laden riff-age – it’s not all about the singer of course (even though we singers like to think the opposite) – Reza G and Jon Wingrove’s rhythm section is just as solid as a rock in these two numbers while both guitarists pile on the pressure to your inner ears. The singing – joined in places by some excellent female vocals (sorry – I don’t have her name) moves from operatic bombast to low growl, but also through sections where no fireworks are required. ‘Sanguine Path’ draws things to a close, seeped in cult energies, but in no way acting as coda filler for the rest of the record.

King Goat should be very proud of this, and metalheads the world over should lap it up. Check ‘em out.