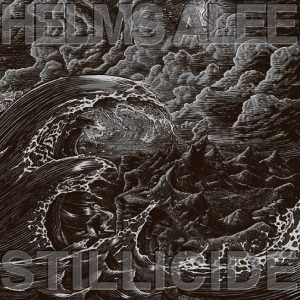 Released on September 2, 2016 via Sargent House

With the legacy the area has in terms of rock history, Washington State’s Helms Alee might suffer from the weight of expectation of adding to the State’s incredible back catalogue of great music. Well, there are occasions on fourth album Stillicide where they create moments worthy of sitting alongside their forbearers. When I was doing my “Holy Shit! Why have I not heard of all these amazing bands?!” sweep of the Sargent House website about 4 years ago, Helms Alee were one of the bands who tickled my fancy, but remained just under the parapet of all-out wonder love. Until now.

How do you describe their sound? Well, my gut instinct is to say they are a super heavy version of Royal Trux, a band I also revere mainly for Accelerator, the one album were they absolutely nail whatever the fuck it was they were trying to do. Maybe we could describe them as a more primal Pixies, if that were even possible, as the combination of gut wrenching howls (courtesy of Ben Verellen – guitar) and rasping indie/pop melodies from Dana James (bass) and Hozoji Matheson-Margullis (drums) follows their blueprint. Or maybe we should just give them their own space because there isn’t another band that I know of right now, who are making this kind of exhilarating and daring music. (I’m keen to find more if you know of any).

Heralding the beginning of our voyage, hammering pianos, howling guitars and heavenly voices layered up with earth shakingly heavy bass and guitars form opener/intro ‘More Weight’. Swiftly followed by the steady fuzz grind of ‘Untoxicated’, the music is dirty and sleazy, full of ice cool melodies and is a brutal collision of intensity and chaos. Oh, and fuck me, what a guitar solo!

Then we get to the album’s knockout song, ‘Tit to Toe’, the opening moments of which sound like a freight train hurtling off the tracks. Thunderous drums clash with off-kilter guitars while Ben howls like a man possessed before the most wonderful melody of the chorus reassures you. The contrast is remarkable and oddly beautiful. As the song comes to a close, the bridge bursts into stunning melody while what appears to be three drummers beat the living shit out of their kits. There is a beguiling folk element to the harmony vocals, wandering bass and swooning droning guitars found on ‘Meats and Milks’. Huge swathes of guitar announce the arrival of the crazy man again, this time he’s really pissed. Before you have time to catch your breath you’re engulfed in another sky scraping solo that appears to be conducting the drums, changing in tempo and intricacy in tandem.

Selecting ‘Stillicide’ as the album’s title track seems an odd thing to do, the track is a collision of awkward tempos and refuses to settle with any semblance of melody. After the filthy bass riff intro, siren guitars wail over an absurd jungle drum beat while the vocals interject into the mix like a monotone announcer at a train station inhabited by ghosts or demons. When Ben pitches in with his obligatory moment of rage, you realise just how much of a mess the track is. The perfectly named ‘Galloping Mind Fuk’ is a tumbling ride of savage riffs, murderous drumming and maniacal howls. The staccato vocals from Dana and Hozoji add menace and the riffs synchronise to the stop/start groove. It’s another shambles of a song though in terms of hooks and/or structure. Thankfully, the quality takes an upturn again with ‘Creeping You Company’, the folky melody and uneasy tension built up by thumping drums and droning guitars reminds me of …Trail of Dead. At the same time, this is a welcome relief to the carnage of the previous two wrecking balls. The end of the track erupts in a glorious melodic release as Dana and Hozoji join in the sing-along.

Over-powering drums trample all over what effectively could be a dreamlike ballad with ‘Dream Long’. Well, maybe you would need to drop out the storm inducing guitars too. The dream is thankfully brief as the latter stages are distinctly nightmarish. The twanging guitar line in ‘Bullygoat’ recalls ‘Personal Jesus’, albeit amped up with throbbing bass and drumming that can only be described as pure bedlam. At times, the much admired spirit for invention and will to be obtuse diminishes the memorability factor. On ‘Andromenous’, a complex clipped drum pattern is intertwined with all manner of tangential guitars. Layered over this backdrop is a shimmering vocal melody before robo-cheerleader chants consume the rest of the track.

It’s impossible not to hear Fleetwood Mac’s ‘The Chain’ over the intro to closing track ‘Worth Your Wild’, but before long the impossible tempo and rhythm changes beat on the groove. Ben renders a wondrously yearning vocal melody (not too dissimilar to Bono at times!) which rubs itself up against the recurring chain moment in the most salacious manner. Whichever one of Dana/Hozoji it is singing the refrain, it sounds like a very fine PJ Harvey impersonation. Ben’s soaring backing vocals add a colourful and poptastic brilliance to the fucking insane splattering of drums and furious guitars. What a glorious finish to the album.

The PR for Stillicide points to this being Helms Alee’s best album yet. In terms of song writing, emotional content and production, courtesy of Kurt Ballou, it most certainly is an extremely entertaining rollercoaster of a ride. At times, it’s a difficult listen, challenging your senses by offering up the prettiest of musical melodies, but covering them in a thick coating of sludge noise indecency. With every release Helms Alee raise expectations, though I think this is fair to say of all Sargent House’s bands. The good news is, most of the roster are capably doing just that and Stillicide is another album to add to the ever expanding ocean of brilliance.