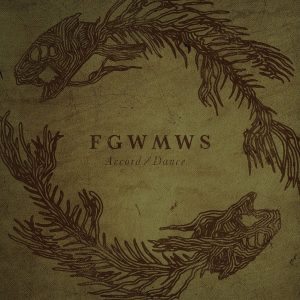 Released on July 4, 2016 via Art As Catharsis Records

Fat Guy Wears Mystic Wolf Shirt have been a bit quiet of late – well, quietish. Several of their number formed part of the collective that brought us the astonishing and, frankly, uniquely wonderful Kurushimi album earlier this year. Improvised jazz/thrash/lunacy detail completed, FGWMWS have returned with this great EP, with more wolf, more guy, more, er, fat, and in thirteen or so minutes of playing-time you’ll have had the greatest amount of fun this side of putting your head through a meat-slicer (don’t try it at home kids).

Accord/Dance marks the first release from the marvelous Art As Catharsis label – after a short hiatus while they went off and gathered ‘vibes’ in The Himalayas,and it’s great – really great – to have both the label and this band back in our lives. As an EP, it’s all too short of course but that really is the only negative thing I have to say about this release.

I’ve really got to like this band since they were drawn to my attention last year (hat tip to Sander, our long-suffering Echoes and Dust Metal editor), and it’s been a great journey catching up with their music. For the uninitiated, and for sheer brutality of music, for such life-affirming catharsis, FGWMWS is the place to go if you like Napalm Death, The Locust, or indeed Melt Banana – with the experimental nous of a Mike Patton side-project thrown in for good measure.

What do they sing about? I haven’t a clue. I have no idea. But the barked, snapped, and snarled and growled vocals sit alongside increasingly avant-garde arrangements, featuring violin and sax solos, trombones and – well – all sorts of things you wouldn’t normally expect to find on a hardcore record – but then FGWMWS aren’t your run-of-the-mill hardcore band – a love of symphonic music and free-jazz runs through this EP just as strongly as the band’s love of punk, thrash, and doom.

I’m not going to describe each song, that would be pointless, you just have to throw yourself into it –  this is a band to give yourself wholly over to, to immerse yourself in their world, and develop your own emotional responses. It’s clear that the intense musical improvisation demanded on Kurushimi has rubbed off on this EP, but even if you haven’t heard that – just take it from me this is loud, exhilarating, virtuoso stuff – painfully ignored by the mainstream because rock music is, on the whole, just too conservative for it’s own good.

If nothing else check out ‘Test Pattern’, which is only 3:19 long, but packs more musical nous and emotion into that time than many bands manage over a dozen full-length albums – or the all encompassing sonic blast that is ‘Afterthought’, a track that stays with you long after the last note fades into nothingness. Exemplary. Astounding. It’s beyond brilliant – I can’t wait for a full album.