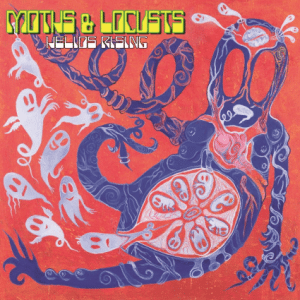 Released on July 7, 2016 via Sunmask
It’s a bit ironic that I am writing this review in the midst of a gypsy moth invasion here in New England, and the band’s name is Moths and Locusts. That is the only similarity, that I can promise you. Moths and Locusts is a heavy psych/space rock band that hails from British Columbia, and this is their second album and the first time I’ve encountered their work. Recorded at Jordan Koop’s Gabriola Island studio, the sessions for this album began two days after guitarist Mike Breen’s father passed away. Despite and perhaps in part because of these circumstances, all of Breen’s emotions spilled into the music, and what you have is a pretty fantastic psych album as a result.

I keep playing opening track “Our Dear Leader” over and over. It starts off gentle and pastoral before launching into a cavalcade of stormy guitar work, and the pace never lets up. The song easily combines prog and psych into a delectable stew with a catchy main riff and slightly off kilter vocals. It somehow reminds me of the kinetic work of Jan Akkerman and Focus. “Beach Party Afternoon” starts off with tribal drums and thrumming bass married to backward vocals, and after a minute, it surges into a wall of feedback that screeches at you. Finally, the vocals are ushered in, and they’re emotionally removed from the fuzzy, hazy vibe that surrounds your ears. Found voices pierce in and out of the sonic waves, imparting a story but never clearly enough to make out. The song is a force of nature and makes a beeline for the jugular, never letting go until the end.

“Troubled” is out of the gate creepy, with backward vocals and odd chanting. Piano and muted guitar mesh seamlessly with the sonic backdrop, and finally the piano offers up the main melody. It is a shape-shifting, time traveling tapestry for a spaceman wending his way through the cosmos. Even with all the layers, it’s the keyboards that really drive this song home. “Invisible Light” is just plain beautiful, floating and shimmering in fuzzed out layers. It’s musically less complex than some of the other songs, but it’s that simple structure that attracts me. Be assured, however, that there is activity hovering underneath the front facing melody. Reverb drenched guitar swoops over and below the bass before fading out with the drum beats.

“Capsule” is captivating, wild and unsettling like an out of control satellite, spiraling and whirling  before veering into jazzy space jams. “Aftershave and Nicotine” is so decidedly different and short compared to the other songs that it hovers like a foo fighter before disappearing into the ether. “Biblical Prophecy” is a wavering dream, a flickering candle of light painting the darkness. At ten minutes long, it slightly taxes the listener’s patience as it meanders along. At the five minute mark, it finally takes flight and relaxes into an extended cosmic groove. The final song is the title track, and at four minutes, it’s a somewhat sleepy and trippy coda to a supercharged psych album. The piano and guitars do pick up a little, and finally sets you down with a gentle nudge to the senses.

Highly recommended for fans of psych jams and generally groovy and tripped out tunes.