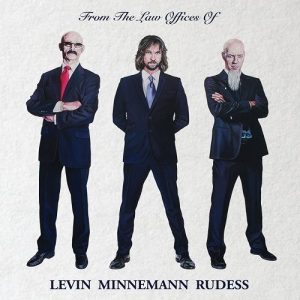 From The Law Offices of Levin Minnemann Rudess is the second album by Levin Minnemann Rudess, following the trio’s eponymous debut, released in 2013. All three members of the trio are legends in their own right – this is definitely one of those rare occasions when a band such as this deserves the label “supergroup”. However, this is no monolithic exercise in grandiosity, such as we might have come to expect from a supergroup. Rather, this is the sound of three extraordinarily talented musicians with enormous technical skill showcasing their own visceral thrill in the process of creating music that doesn’t fit the mainstream. For you won’t find any vocals or lyrics here – except perhaps a few sampled phrases, mangled and manipulated and introduced into the melting pot of ideas as just another instrument. This – like the trio’s first album – is an entirely instrumental affair.

As such – and given Levin and Rudess’ involvement – it would be very easy to draw comparisons to the Liquid Tension Experiment project, where Levin joined forces with Rudess – and Rudess’ Dream Theater bandmates John Petrucci and Mike Portnoy – in creating instrumental music that recalled the exploratory riff- and groove-based rock of the Dixie Dregs, albeit shot through with the band member’s own distinctive influences and personalities. However, whilst there are undeniable similarities to the Liquid Tension Experiment records – largely due to Levin and Rudess’ strikingly individual and readily identifiable playing – the Levin Minnemann Rudess material retains a distinctive feel of its own. Generally it is less obviously epic: the track times on this latest record are magnificently brief, a formidable expression of economy, whereas the Liquid Tension Experiment material frequently stretched out languorously over lengthy tracks. It also tends to be more strongly structured: despite the jammed-out feel of many of the tracks, they each usually clearly and evidently have beginnings, middles and endings. Each builds steadily and logically in a way that purely improvised material rarely does.

The music manages to retain a cohesiveness despite incorporating very different moods and styles, largely due to the clearly evident personalities of the players. The propulsive opener, ‘Back To The Machine’ sets a distinct mood, with its spiralling guitar riff and melodic synth leads and a show-stopping, blur-fingered solo from Rudess – this is where fusion and progressive rock meet, merging and infusing each other. The architectural structure-building of progressive rock provides a format for the musicians and the free-wheeling progressions of fusion provides the fireworks. There are frequent nods to classic progressive rock – most obviously in some of Rudess’ Keith Emerson-like soloing that is particularly evident in tracks such as ‘What Is The Meaning’, and ‘Good Day Hearsay’.

Dream Theater fans will find a lot to love in the scrambling urgency of ‘Ready Set Sue’, with its dizzying runs and classic Dream Theater-style denouement, where the entire focus of the track changes after a vertiginous series of chord changes during the coda. The subsequent ‘Riff Splat’ also reproduces one of Dream Theater’s favourite tricks: the rhythm and lead parts play around with meter with reckless abandon, resulting in periods where the track, two wheels in the air, threatens to run off the tracks altogether, before slowing down to a menacing crawl, and launching into a dramatic metallic finale.

This is not to say that the trio are in heads-down Dream Theater-style territory throughout, however. After these first few more frantic tracks, the pace slows to something rather less frantic, and the more atmospheric side of the trio’s music emerges. The languid mid-tempo glide of ‘What Is The Meaning’, shot through with vocal samples and warped bass carries the DNA of each of its creators quite plainly; other highlights include the dreamy slo-mo drift of ‘Balloon’ (which interestingly seems to almost borrow an acoustic introduction from Dream Theater’s The Astonishing); the joyful ambience and sparkling keyboard runs of ‘Marseille’; the nimble leads of the almost Hackett-era-Genesis style ‘When The Gavel Falls’ with its strikingly contrasting sections of light and shade, and the synth-led funk workout ‘The Verdict’, where Levin’s reliably elastic bass comprehensively steals the show. The triumphant Genesis-style theme that repeatedly emerges throughout ‘Magistrate’ is also noteworthy, further evidence that this record is no mere technical exercise and that there is a great deal of melodic gold to be found in the trio’s writing. There are also some intriguing sonic flourishes throughout the record that lift the material out of the standard rock fusion furrow. These flourishes add some interesting colour: ‘Shiloh’s Cat’ includes some melodic and effective saxophone; whilst ‘The Verdict’ lapses into a brief semi-oriental interlude courtesy of Rudess.

The angular album closer, ‘The Tort’, is another particular delight, Minnemann’s drums thundering away, often close to falling over themselves, propelled along by Levin’s fluid bass whilst Rudess is slowly reduced from broad keyboard lines to increasingly outré effects as the track moves to its conclusion. It’s easy to picture a chuckling Rudess straying right off the instrumental path and into the synthesized comedy of the track’s coda. Indeed, the trio’s willingness to nod and wink to their listeners throughout the record in this way prevents the album from ever sliding into po-faced self-parody.

All in all, From The Law Offices of Levin Minnemann Rudess is a pleasingly coherent and hugely enjoyable record, especially for long-standing fans of the musicians involved, who all get ample space and opportunity to show clearly why they are all so well-regarded. When virtuoso musicians work together, there’s always a concern that the results might be a showy, over the top mess as sizable egos clamber over each other for domination; happily that is the exact opposite of what has happened with this trio. Rather, their music feels effortless, uncontrived; there’s a natural meshing that feels extraordinarily relaxed and natural. This album displays an increased confidence in the trio working together as a group, a small but significant increment in their ability to bring out the best in each other and an added boldness to their ensemble playing. If you enjoyed their first record, this is a must; if you’re new to the trio’s work, this is perhaps an even better introduction to their music than their debut. Either way, this is a very enjoyable record – whilst all the members of the trio are busy with their own projects, let’s hope that they’ve all got room in their full diaries for another helping.