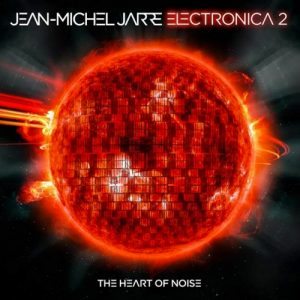 Until the release of last year’s Electronica 1: The Time Machine, it had been eight years since the release of Jean-Michel Jarre‘s last studio album, the controversial Téo & Téa. Jarre had begun work on the Electronica project in 2010, and the size of the project and time required to pull it together has occupied Jarre for the best part of the five years that passed before the first volume of new music was released last year. The project, featuring a host of well-known collaborators,

Now we have the second volume, Electronica 2: The Heart Of Noise. As with the first volume of material from the Electronica project, Jarre has somehow managed to fashion a fairly cohesive record out of the remaining work – no mean feat given the number and variety of collaborators featured. This second Electronica album also has a markedly different mood to the first volume: where The Time Machine was, generally speaking, more atmospheric and reflective, The Heart Of Noise is a more upbeat, uptempo record. Unlike the first record, there are also three tracks on this album that were completed without collaborators, Jarre working on his own.

That’s not to say that the album doesn’t contain some filmic, ambient – even introspective – moments. The opening and Rone-assisted ‘The Heart Of Noise (Part 1)’ unfolds slowly from its metronomic heartbeat into a luscious mid-tempo techno number in the shape of the subsequent second part, which is actually the first of the three tracks Jarre penned on his own. Similarly cinematic is the highly atmospheric ‘Electrees’, composed in collaboration with noted soundtrack composer Hans Zimmer. Here Jarre’s electronica is employed in the service of Zimmer’s sweeping, grandiose score, underpinning the melody with a bubbling undercurrent of sequencer effects and punctuating the spaces in the music with effects straight out of the Jarre greatest hits songbook. Whilst these tracks are all instrumental, the much-anticipated co-write with Eurodance legends Yello (‘Why This, Why That, And Why?’) treads even more resolutely introspective ground, the world-weary spoken word vocals of Dieter Meier given centre stage as Jarre and Yello’s Boris Blank weave a subtle web of synth washes and a children’s choir around them. The juxtaposition between Meier’s tragic, resigned vocal and the church-like pathos of the music is beautifully bittersweet, its touches of wry humour in the lyric only magnifying its effectiveness. As eccentric an offering as you could wish for from a Jarre and Yello co-write, it’s also unexpectedly moving.

‘These Creatures’, written with Julia Holter, is another triumph of restraint. Holter’s gliding vocal is interspersed with cut up collages of her own vocal performances that act as choruses, each collage very slightly different in construction but not in mood. Combined with Jarre’s unobtrusive Eno-esque atmospherics, the effect is stunningly beautiful, and a welcome riposte to some of Jarre’s detractors, who feel that the Frenchman simply doesn’t understand restraint. But then, have they even heard 1990s minamalist epic ‘Waiting For Cousteau’?

Elsewhere the mood is more resolutely upbeat, falling into two broad categories: Jarre goes pop, and Jarre goes full-on dance. Inevitably, some pieces are more successful or imaginative than others, but as with the first volume of Electronica, Jarre sure-footedly juggles the disparate influences at play and ensures that once again, there are no misfires. ‘As One’ is perhaps the least inspired track on offer here, being essentially just a trance remix of collaborators Primal Scream’s ‘Come Together’ (from their 1991 classic Screamadelica), but it manages to be so utterly joyous and in keeping with the celebratory, fell-good vibe of the original song that it seems churlish to register disappointment. At the opposite end of the dance spectrum, we have the clattering hyper-kinetic techno of ‘Exit’. Perhaps the most up-tempo track that Jarre has ever delivered, it lurches unpredictably between effect-driven set-pieces before collapsing in a heap, allowing collaborator Edward Snowden – yes, that Edward Snowden – to deliver a soliloquy about the crucial nature of personal data, before charging off again. Jarre’s intention was to capture the movement of the unseen tides of personal data travelling around the globe and the relentless pursuit of Snowden by the US government’s agents, and in crafting the restless ‘Exit’, he has succeeded. As always when Jarre indulges his passion for contemporary EDM, however, it seems set to polarise his existing audience.

However, whilst the more EDM-influenced material on Electronica 2: The Heart Of Noise is very successful, it is some of the more traditional pop songs that stand out. The thumping synthpop of the Pet Shop Boys collaboration, ‘Brick England’, is effortlessly anthemic with a nagging hook that will snag you from the first listen. Mixing Neil Tennant’s knack for observational lyrics about the mundanity of everyday life with Jarre’s skill in crafting melody has resulted in a song that falls precisely between the Pet Shop Boys’ ‘West End Girls’ and Jarre’s own ‘London Kid’. Similarly, the Gary Numan-assisted ‘Here For You’ successfully distills the musical essence of both artists into a memorable and affecting song, Numan’s instantly identifiable vocals floating over a melody line that is classic 80s Numan, albeit clearly imbued with Jarre’s own stylistic flourishes.

More controversial, perhaps, is Jarre’s collaboration with Peaches, ‘What You Want’. Libidinous in  the extreme, the track has already successfully annoyed some of Jarre’s more traditional fans who seem to feel that releasing such an obviously sensual song is somehow beneath Jarre. Evidently they’ve forgotten that as early as Jarre’s 1971 single ‘La Cage’/’Erosmachine’, the subject of sexuality has rarely been too far from Jarre’s mind.  Peaches powerful vocal dominates the song, which is built upon grinding synth bass and powerful electronic drums. Whether or not it meets with the approval of Jarre’s more conservative listeners is plainly the last thing on Jarre’s mind. Destined to be similarly divisive is Jarre’s collaboration with Cyndi Lauper, ‘Swipe To The Right’. A playful number about a generation’s sad addiction to dating apps like Tinder, it’s a memorable song with a strong chorus that is likely to be entirely too traditional for fans of Jarre’s more adventuresome work. Lauper’s undoubted charisma might sway any waverers, although an unconventional atonal synth breakdown in the middle eight might cause some furrowed brows among pop purists.

Elsewhere there is perhaps a little less controversy to be had. Jarre’s co-write with Sebastien Tellier, ‘Gisele’, is a traditional synth-pop number with vocodered lead vocals, its tense, spacey verses giving way to the carefree bouncing melody of the song’s chorus – it is, however, exactly what you might have imagined a collaboration between the two artists would sound like before you’d heard a note of the results. The same could be said of the loping mid-tempo techno of Jeff Mills co-write, ‘The Architect’. ‘Circus’, Jarre’s collaboration with Siriusmo, is similarly predictable, being a straightforward Eurodance number that combines the funk-oriented feel of Daft Punk with a one-fingered keyboard motif to memorable effect, although the track is content to tread water rather than reach for the stars.

As with the unexpected delights of the collaboration with Yello, however, it is the more unexpected results that are the most striking. Jarre’s collaboration with early 90s ambient pioneers The Orb (‘Switch On Leon’) is a typically unconventional tribute to Leon Theremin and Robert Moog, its throbbing bass underpinning a cavalcade of sampled effects and snatches of speech, Jarre weaving an eerie theremin melody through the track. Its an affectionate – if off-beat – tribute to the electronic pioneers, perfectly suited to The Orb’s eccentric sense of humour.  Perhaps the most unusual of Jarre’s collaborations on this record, though, is saved to last, as he joins forces with French pop legend Christophe, with whom Jarre worked in the very early days of his career. The resulting track, ‘Walking The Mile’, sounds uncannily like Massive Attack at their most paranoid and unsettling. “I’m thinking ’bout you, baby” wails Christophe repeatedly, over a background of queasy synth leads, Twin Peaks guitar, and sodium-lit, quivering bass. Icily compelling and unsettling, it’s not at all what might have been expected from either musician, and is all the more dramatic for that fact. The track finally crashes to an abrupt halt in a salvo of electronic drums.

The album closes with two Jarre solo compositions: ‘Falling Down’, an upbeat number that serves as Jarre’s reaction to the entire Electronica project; an epilogue of sorts. Clearly Jarre has revelled in the extensive collaborative process that the project has offered him, and there’s a sense that this has led to a personal re-birth in a sense. Here he sings – albeit through a vocoder – the entire song, which successfully marries his pop and dance sensibilities to his more atmospheric tendencies. As he embellishes the song, peppering it with synthetic string runs and percussive breakdowns and some of his trademark effects, it’s easy to imagine Jarre truly relishing the ability to strike out on his own.

If ‘Falling Down’ is an epilogue to the Electronica project, the album closer, ‘The Heart Of Noise (Origin)’ is its prologue. It is essentially the first demo prepared for the project, which finally became the two-part track that opens this album. It’s an intriguing inclusion, and shows just how developed the track was before the collaborative process began, yet also how that collaborative process honed and polished it.

As the album – and the Electronica project – comes to an end, there is a feeling that Jarre has finally crawled out from under the weight of expectations heaped upon him by long-term fans and genuinely feels unbound from the multi-platinum successes of his past. Those earlier records will always be a part of him, but they have long since ceased to be all that his music is, stylistically speaking – and the process of working with so many disparate musicians genuinely seems to have renewed his passion for experimentation and the process of creating music. The Electronica project would make for a striking and very successful swansong for France’s biggest musical export – but let’s hope that this is not the close of the book for Jarre, but just the end of a chapter. For on this kind of form, the 67-year old feels genuinely rejuvenated, as vital and unpredictable as ever.