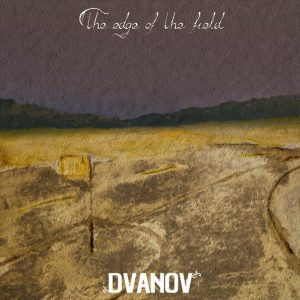 If you’re in the mood for psychedelic tinged folk, Russian band Dvanov might be right up your ?????. Although if you, as I did, drop by the band’s Bandcamp page you’ll find scant information about them, save that they were previously known as Voda-i-Ryba (Fish and Water). Relocated from Krasnodar to Saint-Petersburg, I’m guessing the change of location must have heralded the change of name, all the releases – and very good they are too – now badged under the Dvanov name. Which is probably a Russian enough sounding name to intrigue Westerners like myself and also easier to pronounce. Russia is to my mind a largely disorientating and confusing place so we shouldn’t be surprised that the same applies to its music industry.

My prejudices aside though, Dvanov’s latest EP, The Edge of the Field, is an extremely well accomplished piece of work that should inspire you, if you’re so inclined, to check out the rest of their recordings. It’s well worth doing so, for the band manage to meld a traditional folk feel with a psychedelic rock sensibility, producing an independent and not at all unpleasant sound. First song Blood mixes Russian and English vocals with a progressive and insistent accompaniment that chimes along hypnotically, head noddingly even, reminding you in places of Kate Bush – possibly it’s that Eastern European sensibility that ran through a lot of her records.

Following songs ‘Smell of Camomile’ and ‘Sowing Song’ bring fuzzy, distorted guitars to the fore, while still keeping the folk-rock feels intact, both songs shimmer with the heat of a southern Russian summer, riven through with that sense of loss and longing that seems to feature in much of the Russian musical tradition. There’s a great deal of poignant lyricism too, which is one of the benefits of having a poet as a bandleader.

An then – that’s your lot – the record is over as quickly as it started. It’s worth however sticking the thing on repeat while you check out the band’s other stuff. Russia might not spring to mind when you think of alternative rock, but clearly if there are other bands as accomplished and mature as Dvanov, it’ll be a seam well worth mining.