(((O))) : The Claypool Lennon Delirium – The Monolith of Phobos 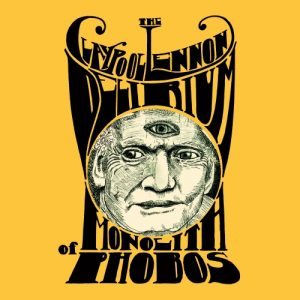 A cracking record straight out of the starting blocks this one, part psychedelic rock, part agit-pop alt-funk, thanks to the various talents of Sean Lennon and Les Claypool.

Drawing on the strengths of each, without one party dominating the other – we find ourselves in a perverse and paranoid world populated by seedy, disreputable characters – Mr Wright, The Oxycontin Girl, Captain Lariat, and almost implausibly, but totally logically, Bubbles – Michael Jackson’s chimp (or most famous chimp, he had many). The songs themselves, a mixture of both pathos and bathos, reflect something of the generosity of character that exists between Lennon and Claypool. In fact you’d be forgiven for thinking this was the ninth or tenth album that the two had produced given the seamless interaction of the compositions.

The one thing that really does create distinctions are the voices – both instantly recognisable, but able to blend without seemingly forced or with one jarring up against the other. It’s all too easy in these collaborations to have a “Woo Hoo! Dave Grohl everybody!” moment – I’m not getting at Dave, it’s just an example – but the key to understanding this work, is that the artists are totally comfortable with letting the music speak for itself, without the need for any tedious stunts. Yes, that sounds like Claypool bass, yes, this sounds like Lennon guitar, but fate has decreed that these things should be together, and I’m sure after a few listens you’ll agree with me that they should never be split asunder – just listen to the insistent psychedelic chug of ‘The Cricket and The Genie’, or the outro of ‘Boomerang Baby’ and it’ll happily scratch those psych-y itches.

It’s also a record full of quirks – ‘The Monolith of Phobos’ is riff on Buzz Aldrin’s belief in aliens, ‘Bubbles Burst’ reveals strange things – but perhaps not unexpected ones – about the Neverland Ranch. ‘Mr Wright’ “Sets up little cameras so he can watch you shower”; ‘Captain Lariat’ sports a “tattoo of Sean Penn”. It’s as if Tom Waits fell into a Spongebob Squarepants cartoon – all primary colours, characters, but with an underlying sense of doom.

There are also moment of sublime wonderment; with the seemingly unstoppable rise of the self-serving right-wing capitalist schtick of Donald Trump, ‘Ohmerica’ charts the folly of modern America, tracked as it is by lyrics such as “We’re all but dying, the world’s on the brink / That’s what the devil wants you to think / Don’t ever stop shopping, never give in / If we stop shopping the terrorists win.”; ‘Boomerang Baby’ charts our own folly, plugged in – as we are – into social media – always connected to the world, but never connecting with it; “She’s always bored although you know that she’s drowning in stimulation / She feels alone despite her many modern friendships and relations”. It, well the whole record really, is a lesson in songwriting and lyricism.

But overall there’s a sense of humanity slipping away by degrees. Each character in each song seems to be in a more isolated bubble then the last – whether it’s Mr Wright’s peeping tom obsessions, Lariat’s blatant egotism, the conspiracy theorists looking for alien monoliths on Mars, the Oxycontin Girl in a world of nothing but drugs and scoring drugs, Michael Jackson’s kidult Neverland fantasy. There’s a sadness of a planet populated by those who, introverted see nothing but their own cares and concerns. The titular monolith brings the false hope perhaps – that advanced civilisations may save us – but perhaps it’s more likely that they are long dead, destroyed by their own foibles. ‘There’s No Underwear In Space’ says the last song – leaving us naked and alone in the void, devoid of knowledge, sort of the opposite of Kubrick’s Starchild in 2001: A Space Odyssey.

In many ways, it’s a sad record, but in others it’s just so glorious and for that reason alone it should be taking up space on your record shelves.