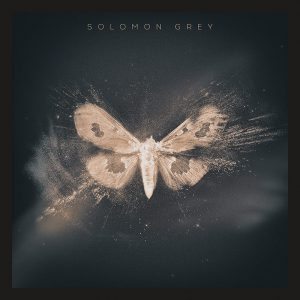 I first encountered Solomon Grey upstairs in cafe in Manchester’s Northern Quarter, sat on the floor at a wonderful, intimate gig with no more than about 40 people. Now, my usual gig stance is up near the front of a small, dark, usually dank, tiny venue with a cider in hand. Variety is the spice of life, so they say. Something about Solomon Grey immediately captivated me early that Saturday evening. SG members Joe Wilson and Tom Kingston, quiet and understated produce a huge, layered and complex sound. Tracks are seemingly built and constructed rather than just played. The opening tracks on their eponymous LP mix sampled female vocals, swelling strings, drum machines and synth, giving them an 80s feel. The layered vocal parts in ‘Last Century Man’ are stunning. One criticism of the album is the production. Kingston’s vocals live are a powerful falsetto but are smoothed out on record, muting the power which is a shame.

‘Electric Baby’ is more upbeat but with a similar vibe. Song is dense and complex but at the same time memorable and catchy. The track peaks and troughs but all the while building for all of a sudden come to an end. The expected climax never ends but instead leaves the listener wanting more.

The album takes a departure from the 80’s sound, ‘Broken Light’ has incredible swelling strings. This song should be about twice as long as it actually is. ‘The Rift’ is similar a huge organ sound with the now familiar vocal hook. A song that wouldn’t be out of place in a huge grand venue on a professional PA – something suitable for its grandeur. Such a shame it’s only two minutes long! ‘See You There’, again, had the 80’s feel about it. Keyboard riff. The vocals are incredible, what sounds like a female singer reaches a stunning high note.

‘Slow Motion Picture’ – Slow and with deep emotion. Tend to focus on the lyrics rather than in other tracks where the vocals can be more of an instrument. This is a subtle and rather sad song. As with other tracks on this album deceptively complex. ‘Gascerene Sound’ is a track that takes time to build. Again, vocals layer and mix with the samples. This is a subtle track, with bass and drums that gradually make themselves heard. ‘Hidden Planes’ has a different feel to it and has a bit of a harder edge, distorted guitars and deep bass. Sounds very post-rock in it’s sound and structure but a little more understated than run of the mill crescendo-core. I think it would be easy, and rather cliched to overcook things but they always keep things rather understated.

‘Choir to the Wild’ – Starts with a subtle piano and vocals. Lots of little details are added in the background. Suddenly strings, keyboards and samples are build and mix together. Live this track is incredible to hear, the way that the cacophony of noise builds is stunning.

Solomon Grey are a pleasure to listen to, hard to categorize them as any one particular genre. SG’s output includes movie soundtracks and the cinematic and classical touches come across on this album. Wilson and Kingston are a talented pair creating varied and complex music whilst still remaining memorable.