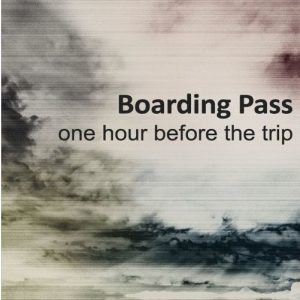 Released on November 18, 2015 via Soundcloud

Eschewing their early days of progressive rock and psychadelia in favour of more experimentation, One Hour Before The Trip present their latest body of work Boarding Pass. This latest work displays strong promise from the band, who clearly lay out the various formulas and aesthetics that fall into the instrumental rock genre. Whilst certain bands may opt for very specific styles within the broad genre, One Hour Before The Trip seem to be presenting a great multitude of elements, showcasing their strong understanding of the genre as well as their ability to take any leaf out of its book.

Boarding Pass presents that new chapter in One Hour Before The Trip’s repertoire. From the offset, we’re presented with promise as the band showcase their understanding of the intricacies of post-rock, before sweeping it away in favour of the intense and bombastic. There’s all the makings of a strong record here, with the focal point being the band’s remarkable understanding of so many different elements of the genre, as well as the strength in which the band present that understanding. It’s apparent that the band are very capable and talented at what they’re doing.

Whilst there’s many strengths to presenting a varied album experience, it does come with the problem of it all coming across as a slightly muddled and incoherent album experience. Each track presents something different, and some strength from the band, but as a whole, it doesn’t seem to work quite as well as the band might have hoped for. It’s perhaps a problem we see on a lot of albums, where there’s too many ideas all wishing to be thrown in, and as a result the whole experience feels a little disjointed.

Although Boarding Pass suffers from a few faults, it’s hard to deny the strong natural talent present on the record. There’s a clear element of effort and passion that has been thrown into each and every song, and whilst the album experience might feel a little confusing in some respects, the songs themselves can come across as very promising and enjoyable. One Hour Before The Trip seem to have moved into more interesting territory on their latest album, and once all the kinks and faults have been ironed out, we’ll most likely see some very promising work from the band.