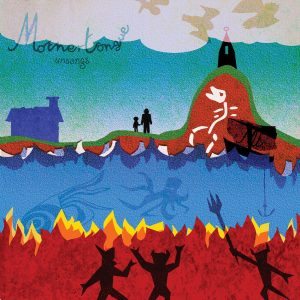 Mothertongue describe themselves as progressive-indie-rock-jazz-quiff-pop, which is an ‘interesting’ description, but does seem to almost sum up the breadth of musical styles on their album, Unsongs. The opening track ‘King of the Tyrant Lizards’ starts like a slap in the face, horns, raucous collective vocals. Catchy and tends to stick in the memory. It’s immediately obvious that this Manchester-based six piece are a talented bunch of musicians. ‘A Poem That The Sky Wrote’ and ‘Perfect Zero’ have  a funky guitar riffs and a poppy sounding choruses, again strong and upbeat.

‘The Fog’, has a different feel to it the track starts with strings and and acoustic, a more hushed and sparse song. Horns come to the fore. Song builds in complexity then goes back to a vocal harmony and spare instrumentals. ‘Nautilus’ is in a similar vein, jazzy and smooth at the start but  morphs into a raucous, shouty rocky track. The vocal hook “down comes the rain…” is big and bold and memorable. ‘Little Mice’ – has Jaunty proggy riff played in a pop style. Like many of the tracks it jumps about in tempo and style. Underneath are lyrics that range from downright odd to clever wordplay and insight.

‘Shango’ is a track evidently written for the soundtrack of a Coen brothers film. Probably a spaghetti Western. ‘Waxwing’, ‘Blooper’s Theme’ and ‘Starcross’ are tracks that seem to be the band where there are most comfortable, they have more of a regular rock feel (at least in structure) but still have a very distinctive feel, the use of horns and real, foot-stomping crescendos.  Some may like the more unusual tracks but for me this is where it’s at, lively, musically fantastic and unique.

‘These Hands’ a quiet, more low-key track, almost like a token ‘quiet one’ seems a little out of place after all the foot-stomping craziness of the previous tracks. ‘Funeral Song for the Icarus Worm’ and ‘Sidescroller’ are short instrumental tracks, this seems to be all too common these days, no idea why they are included on so many albums recently.

Unsongs is a whirlwind journey through various styles, tempos and feeling. In a few tracks there is a tonne of things going on, almost too much at times. At other times the tracks reach fantastic crescendos, big, bold and raucous while not being overdone. I get this won’t really hit the mainstream, but it’s a shame because it really is bloody good.