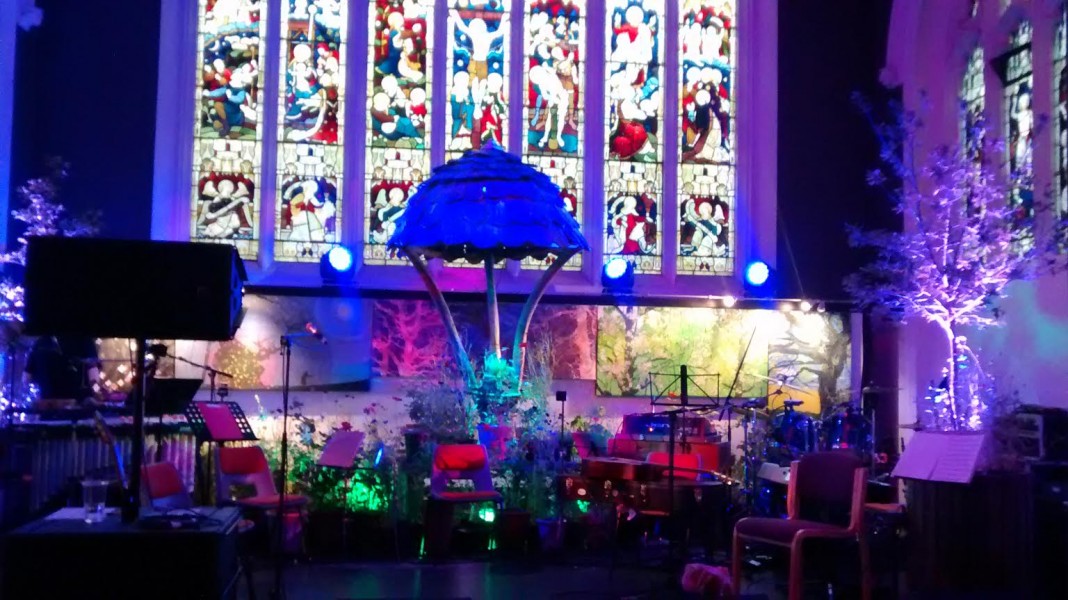 What better reason is there, to hie thee to ancient Salisbury’s Mediaeval streets, than to hole up from a world of Brexits and back-stabbings in an old church amongst a sublime and picturesque pastoral art installation and listen to music from a bunch of former Cardiacs band members and special guests? So, as the rest of you were no doubt rolling in the mud at Worthy Farm, I spent the evening in decidedly warmer and drier location.

This concert was the culmination of the Transplant art installation, by Matt Cutts and Sarah Jones (former Mrs Tim Smith and much loved/missed Cardiacs saxophonist), which explored the connectivity between art and nature. Transplant brought together sculpture, images, music, poetry and living plants and so, inside the Salisbury Arts Centre, Cutts’ marvellous wooden sculptures sat in ‘fields’ of wildflowers and trees alongside some beautiful batik paintings by Jones. Drifting above it all was a soundtrack of music and birdsong – which I later found out was composed by Sarah Jones and another former Cardiac – Craig Fortnam.

It was wholly appropriate then, that the concert should take place amongst the trees and flowers of the exhibition, under the Arts Centre’s magnificent stained glass window, all lit up like some magical grove, or psychedelic fairy circle into which our parade of hearty troubadours would troop in turns for our entertainment and edification. The whole effect of which was pretty much like being in the Shangri-la field at Glastonbury, but with better heating (okay, so I’m no art critic, but I’m barely a music critic either – truth be told).

This was an intimate concert – I’d estimate no more than 200 people packed into the bar-space – so that every nuance, every bead of sweat, could be experienced quite literally cheek-by-jowl as the evening wore on. It felt very un-gig-like (new word), it felt more like a group of friends gathering together to entertain one another – attendees and performers greeting each other like old compadres with a shared history which of course, they do (right down to the foundations of the former church now arts centre which was the location of the legendary Cardiacs live concert film All That Glitters Is A Mare’s Nest). The bands, when not playing, mixed with the audience so it wasn’t unusual to find oneself rubbing shoulders with William Drake, Mark Crawtha, Bob Leith, Craig Fortnam (although – top tip – he’s very tall so don’t let him get in front of you).

Of course, groups of friends entertaining each other with story and song goes right back in our history to olden times, it harks back to an era when we were perhaps more in touch with each other, not to mention more in touch with the natural world around us and perhaps that was the spirit that the Transplant Music Night was trying to promote. Interestingly, folk-music gigs often give off the same vibe, and equally, folk performers are just as approachable as all the turns were here. A faceless concert this was not.

Watching over it all, from a raised area at the back, was the genial form of Tim Smith himself – still fighting his physical battle with the aftermath of his strokes – but totally engrossed by the music and overjoyed to see his friends and former bandmates playing. It felt very special to have him there, I raised a glass to him, but I don’t think he saw it. 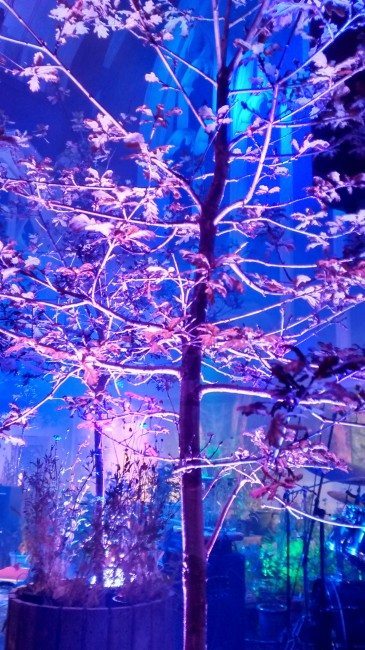 Kicking off the evening with great charm was guitarist/singer Emily Jones with, in her own words, “…songs about bees and dust”, but mostly dust. It was perhaps a bit of a nervy start, but she needn’t have worried, the songs sounded very good – not that I was familiar with any of them – but set the scene amongst the floral artwork for the evening ahead. She was warmly received by the growing crowd in any case and it will be nice to hear more from her.

After a quick break for fags and beer, Craig and Sharon Fortnam’s North Sea Radio Orchestra took to the stage with their combination of traditional song and chamber orchestra. On this occasion they chose to present as an octet, drawing on past albums and introducing a new number – brace yourselves – using the drum machine app on Craig’s phone (cue mock gasps and laughter from the audience). You never know, perhaps – like the Sisters of Mercy’s Dr Jeep – the drum machine might get a regular credit on future NSRO long-players. ‘Kingstanding’ from the first album was a highlight, as was their paean to Krautrock, ‘Berliner Luft’. Topping all this for me though was Sharon Fortnam’s gorgeous voice, spellbinding and hypnotic. It was a phenomenal set, and really quite something in the elven glade created around the stage.

It would probably be unfair to say that William D Drake’s pastoral, psychedelic, folk was the main draw of the evening, but by far the largest crowd had assembled to hear the pianist/singer, joined not by his full band but by members of NSRO, including one James Larcombe (from Stars in Battledress) – a mean hurdy-gurdy gunslinger and no mistake. Drake drew mostly from his last album Revere Reach and the previous LP The Rising of the Lights. ‘Lifeblood’, ‘The Catford Clown’, and ‘Orlando’ proved to be crowd favourites from the former, while ‘Me Fish Bring’, ‘Ornamental Hermit’, off the later were very impressive from the latter. Perhaps the greatest crowd pleasing moment – aside from Drake’s excellent shirt  – was his cover of ‘The Teddy Bear’s Picnic’. The epic ‘Homesweet Homestead Hideaway’ finished the set.

Redbus Noface  – featuring no less dignitaries than Mark Crawtha and Bob Leith drew the evening to a close; a complete change of mood with their trad rock band set-up and loud, raucous psychedelic rock; they were somewhat reduced in number – playing as a power trio – but made up for it in backing tapes and effects pedals. Also reduced in number by this point was the audience – around fifty or sixty bodies I’d say – which was a shame as Redbus are a great band to behold when firing on all cylinders.

Perhaps the Cardiacs faithful all have sensible day jobs and school-runs to consider these days (it was a Sunday). As is often the way with these multi-act evenings the final band were left with a reduced set time. I’d have loved to have heard more, and so would have those who were left, but out we spilled into the dark wet Salisbury night. All in all it was a fantastic, magical evening that managed to weave a tapestry around old traditional forms of music/art and new innovation. And as I drove back home through the ancient Savernake forest, it struck me that we’d covered quite a lot of ground, sonically, that evening, if you consider the whole historical breadth of British music. As the music of the past spoke to the music of the present it was clear to see that Tim Smith’s legacy – beyond even Cardiacs – was his inspiration for so many artists to draw from that past and make it soulful, fresh, and engaging for the future.