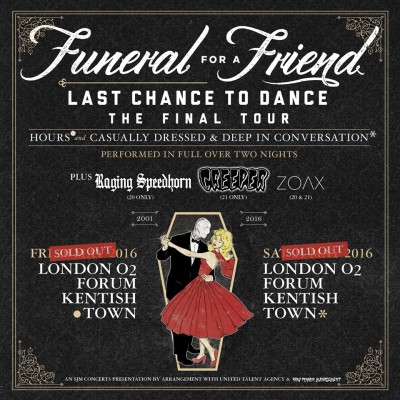 Assuming that the future will not provide a change of heart, Funeral for a Friend performed for the last time on 21st May to a sold out Forum Kentish Town, and I was privileged enough to be among them. Whatever you think about Funeral for a Friend, something they definitely do not lack is a solid fan base, and those fans had turned out across the country in the last few months to see them bow out in style. The atmosphere was unlike any I had ever encountered before, with each and every member of the audience aware that they would be part of something special, and determined to make it so. Funeral for a Friend had chosen to end their 16 year career by performing their two biggest albums in full – Hours and Casually Dressed & Deep in Conversation. Having played through Hours the night before, it was now time for them to play through their debut album and transport us back to early-00s post-hardcore excellence.

We had to wait a while before that though, as first we were treated to two far more recent acts offering the support. Before going in, I personally questioned the wisdom of having support bands play on a night dedicated to celebrating the music and career of one band, but the quality of both support acts certainly justified the decision. Zoax were up first, and the relatively unknown London act were definitely able to turn more than a few heads as a result of their opening set. Although the venue was sold out, it was a very modest gathering who turned up early to see what this band, who only have one album to their name as of the week before, were all about. This did not appear to phase Zoax one bit however, as the band furiously pummelled through their set with such energy and drive you’d have thought they were the ones headlining the sold out venue. Frontman Adam Carroll in particular put in a seemingly tireless performance displaying not just great dynamism but accomplished vocals too. His venturing into the crowd and up onto the balcony may well have fallen flat with a crowd who didn’t know them well, yet he was able to pull it off.

Creeper followed to a significantly augmented audience and to a similar reception. The horror punks from Southampton were met with a few raised eyebrows at first, but after a few songs they were able to garner a more than enthusiastic response as they let their music, rather than their image, do the talking. Creeper seemed to grow in stature throughout the show, though the confident performance of frontman Will Gould was never really in question. In a similar fashion to Zoax before them, Creeper proved to be an excellent choice of support because their post-hardcore roots were evident and a great way to ensure they were well-received, but they were also adequately different that they didn’t simply sound like a Funeral for a Friend tribute act. What’s more, both bands were able to give anecdotes of their ties with Funeral for a Friend which meant that the audience was fantastically well warmed up not just for the band, but for the occasion too. Going in, I really felt like it was the end of an era, but the sets from Zoax and from Creeper made it feel far more as though Funeral for a Friend were passing the baton on to new and exciting bands.

The excitement was palpable for the entrance of the band that the whole night was for. Everybody there knew what to expect as Funeral for a Friend launched into the fast-paced opener from Casually Dressed & Deep in Conversation, ‘Rookie of the Year’, which would have been an excellent opener to any gig, regardless of the fact that they were playing through the album from start to finish. The fact that this show sold out so quickly should be a more than adequate description of what the crowd was going to be like. Every song was met with the greatest response possible from an audience who were all clearly very well versed in Funeral for a Friend’s material and very keen to ensure that their last ever show was special. It was almost as if the crowd were performing for the band, not the other way round. Not that the band’s performance was anything other than excellent though. Any fears that the enforced month-long gap since their last set of shows (thanks to them being moved from the Shepard’s Bush Academy) were very quickly assuaged as the band continued ploughing through their debut album with terrific energy and precision. Every song seemed special, though the response to their biggest single from the album ‘Juneau’ appeared to take this up yet a notch further. What’s more, many songs were accompanied with anecdotes and explanations about the songs and their meaning from frontman Matt Davies-Kreye, whose honest and down-to-earth approach to the crowd interactions were always met fantastically. For a band with such personal lyrics, cultivating this kind of atmosphere with a crowd full of die-hard fans was never going to not go down well.

Casually Dressed & Deep in Conversation was a superb ground-breaking album when it was released back in 2003 and Funeral for a Friend were able to give it new life in this live performance. Whilst the whole show was something of a nostalgia trip, the band’s enthusiasm for the show and the way that they took to playing these old fan favourites really did make me sad that they won’t be around to do it any longer. Normally I’m ambivalent at best about the idea of a band playing an album through, but it worked very well on this occasion as the vast majority of the audience knew every song on the album perfectly. They still had some time for a few more songs too, and they really did delve into their past for these taking songs from the EPs that preceded Casually Dressed & Deep in Conversation, and even inviting former members Darren Smith and Ryan Richards for a rendition of ‘This Year’s Most Open Heartbreak’. The enthusiasm of the crowd never appeared to waiver, even when they did go into slightly more obscure songs, which is a great testament to the band and the loyalty they inspire in their fans. As the show drew ever closer to the emotional end, we were treated to two songs from Hours. ‘Roses for the Dead’ gave the crowd their last chance to go crazy and ‘History’ really did make for a perfect ending. There was not one person in the O2 Forum who wasn’t singing along to that chorus, and this continued all the way onto the tube afterwards. An emotional end to end emotional evening for many (there were even some tears from the band themselves), the atmosphere produced by this rendition of ‘History’ truly was a special moment; and moments like that do not happen often. Funeral for a Friend went out in spectacular fashion, but they also went out in a way that I’m sure they will be very contented with. The audience in London definitely were.