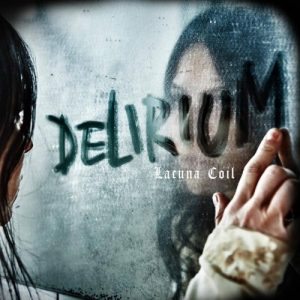 Released on May 27, 2016 via Century Media Records

There’s a moment, about 20 seconds after starting to play Lacuna Coil‘s latest album, where you may find yourself wondering if the record you’re playing is a mis-pressing (or a mis-tagging, if you’re listening to a download). The opening track, ‘The House Of Shame’, seems like business as usual at first: it opens with a typically Lacuna Coil-esque synth-based intro. Then, a pile-driving riff crashes in, pummelling the listener into submission with a cascade of drums accompanied by harsh, barked vocals. Don’t doubt your senses, for this is indeed the sound – or at least a component of the sound – of Lacuna Coil in 2016.

The times they are a-changin’ for the Italian veterans. Following the release of their previous album, 2014’s well-received Broken Crown Halo, there was a veritable exodus of long-standing members from the band. Guitarist Christiano Migliore and drummer Christiano Mozzati both left the band that year, citing personal reasons; they were followed last year by guitarist Marco Biazzi, who told interviewers that he felt he could “no longer add more” to the band’s music. Whilst all three musicians departed amicably from the band, there was perhaps a sense that the criticism oft levelled at the band in recent years – that they were stuck in an enjoyable but musically limiting rut – was not without substance. Quietly, Lacuna Coil regrouped, recruiting drummer Ryan Blake Folden (of The Agony Scene and Burn Halo) and more recently guitarist Diego Cavallotti (Mellowtoy, Neptune’s Rage). Whilst the band had gone through line-up changes before, for the most part they had happened before they recorded their first album (In A Reverie) back in 1999. Unprecedented change had come to Lacuna Coil, and fans and critics alike were left wondering what impact the loss of three long-serving members would have on the band.

The opening track from Delirium is an indication that the band have embraced the possibilities offered by this tumultuous time. The previously mentioned ‘The House Of Shame’ wrong-foots both the Lacuna Coil fan and the doubters who think they know what to expect, to great effect. Whilst it’s the album’s boldest move, it’s not the album’s only surprise. For instance, Delirium most definitely features Andrea Ferro’s most ferocious vocals to date. Ferro had used a harsher vocal style more extensively than on previous albums when the band recorded Broken Crown Halo, a welcome change that helped to provide that record with greater dynamics. Whether Ferro’s increased use of harsher vocals is a deliberate riposte to those who feel his clean vocals are weak – a common complaint from the band’s detractors – or not, he continues the trend on this album to great effect. There are times throughout the record where he might perhaps have employed clean vocals in the past, but has chosen to use a tougher, harsher style this time around, and it has to be said both he and the listener feel more comfortable as a result.

By way of contrast, his vocal foil Cristina Scabbia uses the upper end of her range more extensively. This is especially noteworthy on ‘The House Of Shame’ where Ferro’s tormented roar contrasts deliciously with Scabbia’s soaring high-register work. It has to be said that Scabbia remains a veritable force of nature. Quite apart from her continuing unofficial work as spokeswoman for all things metal and as a role model for fans, the power and total conviction of her performances on Delirium continue to mark her as one of metal’s most formidable frontwomen. There’s a pleasing amount of versatility in her performances here, too: from the sky-scraping melody lines of ‘The House Of Shame’ to the menacing drawl she employs for ‘You Hate Me ‘Cause I Love You’, and the sinister feel she lends to the playful ‘Take Me Home’, after nearly 20 years, Scabbia continues to amaze and delight.

So much for the vocalists; what about the rest of the band? Well, anyone concerned that the departure of Migliore and Biazzi might have a dramatic impact on the band’s characteristic down-tuned riffing need not worry. Marco Coti Zelati, the band’s multi-instrumentalist and chief songwriter, actually handles most of the guitar on the album – Cavallotti provides some additional guitar, as do Myles Kennedy (Alter Bridge) and several others, but his permanent appointment is a more recent event – and does so with the fine touch of a man who knows exactly what each track needs. With the quiet certainty of a conductor, Coti Zelati has coaxed the best out of himself and his band mates – new and old, for new drummer Folden is a perfect fit, picking up almost precisely where Mozzati left off. Mozzati’s restless bass drum pedal lives on in Folden’s satisfyingly driven playing, yet there’s the same keen sense of restraint shown when the material demands a less busy approach. Folden’s drumming lends Lacuna Coil the same kind of weight and urgency that they’ve always had.

Fans will delight in some of the more familiar-sounding tracks. The title track is one of the most obvious of these, its single-word chorus and simple, melodic construction sounding like it could have been plucked straight from the band’s breakthrough album, Comalies. Similarly, the expansive ‘Downfall’ is classic Lacuna Coil, a slow-burning ballad built upon a lumbering, hypnotic riff that builds to a powerful climax, incorporating one of the most effective guitar solos ever to feature on one of the band’s records. The Lacuna Coil of old might have felt duty-bound to end their album with such a track, as they have done in the past. Here, it’s inserted at the halfway point of the record, almost as if to prove a point. ‘Claustrophobia’ is safe ground for the band, too, as is ‘My Demons’, although both tracks feature guitar solos – there are quite a few on this album, more than ever before, in fact – and Ferro employs harsh vocals for the majority of ‘My Demons’.

Old and new are melded with great success on some tracks: ‘Broken Things’ marries a fairly typical Lacuna Coil track – sparse verses giving way to a more melodic bridge – with a thundering chorus equipped with a huge, Slipknot-style down-tuned riff, whilst ‘Blood, Tears, Dust’ uses a juddering electronic riff throughout its running time, lending a nervy urgency to a classic Ferro/Scabbia vocal duel – it even manages to fit in another – this time, entirely atypical – scrambling guitar solo. The middle eight sees everything drop away except for Scabbia’s vocal and the swirling electronica; it is moments like these where the band truly feel like they are pushing the envelope of their established style. There’s a similar feeling throughout ‘Take Me Home’, which is dominated by a nursery rhyme-style chant and feels entirely unlike anything the band have attempted before, and the verses of ‘You Love Me ‘Cause I Hate You’, which combine twanging unease with an undercurrent of electronica and trip-hop style programmed beats to great effect. The synth-heavy ‘Ghost In The Mist’ is also familiar ground, but opens with a scrambling, ascending riff that ramps up the tension before Ferro delivers more of his harshest vocals on the record, making a great contrast with the classic Lacuna Coil-style chorus. Even the closing track, the anthemic ‘Ultima Ratio’, can’t resist a little flourish – an electronic pulse runs through the track and punctuates the driving riff that propels the song towards the finish line in a more overt and deliberate way than perhaps has usually been the case on the band’s records. The band have achieved that most difficult of balancing acts – making a record that will appeal to existing fans whilst still moving them into new sonic territory. Delirium is the same, yet different: the familiar elements are all here, but so are new twists on the familiar Lacuna Coil template.

The deluxe edition of the album adds a further three tracks. ‘Live To Tell’ is a cover of Madonna’s much loved song, and like Lacuna Coil’s reading of Depeche Mode’s ‘Enjoy The Silence’ (from 2006’s Karmacode), they have managed to make it their own whilst not changing it all that much: Zelati’s anvil-heavy guitar leads it a weight it didn’t carry before, but it’s Scabbia’s extraordinarily powerful and soulful vocal that really sells it. ‘Breakdown’ and ‘Bleed The Pain’ are fine additions to the record, yet don’t feel entirely a part of it – if anything they sound like more traditional fare for the band, leading to the suspicion that they might have been sidelined from the regular edition of the album for some of the more unpredictable tracks. If so, it was a sensible decision. Whilst they are fine songs, they feel somewhat staid when measured against the main body of Delirium.

It’s easy to speculate that the departing Migliore and Biazzi might have felt constricted by Coti Zelati’s unmistakable style, both in terms of his writing and his sonic vision for the band (extended now to production, for the first time: to his credit, the results are very impressive); but if that was indeed the case then it’s ironic that the band have, in Delirium, served up what is potentially the biggest musical curveball of their career. It’s not wildly divergent from the band’s established style, but there is enough new ground being trodden here to reassure those who felt that perhaps the band had fallen into a rut or had run out of new ideas. From the thematic unity of the record to its unexpected cover art (this is the first time a band member has appeared on the front cover of one of the band’s albums), from the small musical flourishes that defy expectations to the band’s evident recent enthusiasm for and willingness to accept change, Delirium marks a sea-change in the way that Lacuna Coil do business. That’s almost reason enough to enjoy it, but the sure-handed way that Zelati and his bandmates have embraced change whilst serving up an album that even long-established fans will enjoy means that listeners can enjoy the best of both worlds. Delirium is not, perhaps, the album that will encourage the band’s sternest critics to listen again – it’s not sufficiently different to the band’s previous work for that – but it is nonetheless a thoroughly enjoyable album that will appeal to their more open-minded fans and those who delight in hearing a veteran band evolve and update their sound.