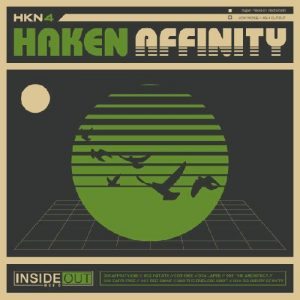 Haken are perhaps Britain’s Most Likely To Succeed band in the progressive metal category. Since their formation in 2007, they delivered two complex and ambitious conceptual records in the form of debut Aquarius (2010) and Visions (2011) before delivering their breakthrough album The Mountain in 2013. The Mountain showcased greater stylistic diversity then their previous records, sacrificing some of the previous records headlong intensity for a more considered and atmospheric feel. Critics weren’t slow in noticing that Haken had upped their game quite substantially and responded with very positive reviews. The good news is that the band have continued this evolution with Affinity, their fourth long player

One of the more obvious ways in which Affinity marks an advance from the bands previous work is in the developing confidence in economy. This may sound counter-intuitive – we are talking about progressive metal, after all – but this economy is not so much about the number of notes played, but about the density of the arrangements, and the band’s increasing ability not to surrender to the siren song of ever-longer, deliberately progressive styled epic tracks. The two songs chosen to promote the album – the songs we might once upon a time have called singles – ‘Initiate’ and ‘The Endless Knot’, are especially noteworthy in this respect, although ‘Lapse’ and ‘Earthrise’ both also clock in under the 5 minute mark and employ the same less-is-more mindset to great effect. It feels that the band are increasingly confident at distilling the essence of their sound into shorter bursts, retaining all the variety and virtuosity that fans have come to expect, but in more concentrated bursts. This has had the happy side effect of making their songs more impactful and immediate, whilst avoiding the trap of deliberately simplifying what they do. The economy of the songs on Affinity is extremely striking.

That’s not to say that Haken don’t allow themselves to stretch out at all, and here they’ve served up some of their best progressive rock epics to date, albeit with that ever-present 80s aesthetic providing a noteworthy twist. Nowhere is this more explicit than in the fittingly titled ‘1985’, which revels in its influences. The ghosts of the Trevor Rabin-assisted Yes and 80s King Crimson and Rush are all evident in the extreme, and yet Haken skilfully manage to evoke the stylistic spirit of both bands without ever slipping into outright pastiche. The opening moves from sounding vaguely like ‘Owner Of A Lonely Heart’, but rapidly becomes its own beast entirely, whilst still slipping in neat musical and lyrical references to the music that inspired it. Electronic drums clatter, electric guitars keen rather than chug, vocoder effects are employed, and vintage synth patches are employed – yet for all the 80s styling, the music is clearly identifiable as Haken. Of course, this is especially true when the band launch into some of their dizzying instrumental passages – the spiralling, frantic middle eight of ‘1985’ is gloriously typical fare, recalling the virtuosity of Dream Theater. It has never been in question, but these guys can really play. This is an apt time to remark that new bassist Conner Green (replacing the departing Thomas McLean) is immediately impressive, his more groove-oriented style lending the new material a weightier low end; he has clearly already formed an effective mind-meld with drummer Raymond Hearne. Together the reconfigured rhythm section ground the band’s instrumental flights of fancy with a pleasingly powerful crunch and an indefatigable energy.

The centrepiece of the album – literally and figuratively – is ‘The Architect’, which at a fearsome quarter of an hour in length is perhaps the de facto showcase for Haken to really show what they can do. It opens in full-on Dream Theater style, a flurry of highly technical interlocking sections that displays their tight ensemble playing and some explosive soloing, before settling into a series of mid-paced verses shot through with chunky riffing that steadily builds into an anthemic chorus. The lyric, on the face of it, concerns the end of a relationship (delivered via email or text message, an apersonal touch that plays once more on the album’s loose theme of our relationships with each other and with technology), but evolves beyond that seemingly simple tale. This then falls away into a lengthy and wonderfully played ambient section of pattering percussion and drifting synth lines, the percussion finally sliced up and processed, flailing back and forth across the music like dangling power cables, until finally interlocking keyboard and guitar solos appear, keyboardist Diego Tejeida and guitarists Richard Henshall and Charles Griffiths scrambling around each other in a dizzying display that recalls the blur-handed technicality of the band’s earlier records. This section of the song gives way to a frighteningly intense guest vocal from Leprous’ Einar Solberg who delivers his brief but incredibly powerful performance in an icy roar that turns the track on its head. The progressive metal madness that follows is truly wonderful, the band chopping and changing rhythms and time signatures with dazzling dexterity before the songs returns to its powerful chorus. It may be a cliché to suggest that the finest moment of a progressive album is the longest track, but this could well be the most astounding song that the band have ever put together. It is in many ways the perfect track to display all that Haken do so well: effortlessly combining an intriguing lyric, their instrumental skill, their knack for a huge chorus and the impressively organic way that they arrange seemingly disparate elements into a cohesive whole, it is a stunning piece of work.

In some ways, the 1980s were a time when everything seemed eminently possible: despite the lingering thundercloud of nuclear conflict, the West enjoyed a period of unparalleled prosperity. Science and technology took quantum leaps forward in a number of fields, and for the most part the zeitgeist was one of optimism and pride, where there was no problem that couldn’t be tackled with a can-do attitude. In retrospect, of course, things were never that simple, and we’ve since paid for that period of untramelled capitalism several times over – but there was a sense that the gloom and uncertainty of the 1970s had been replaced with a more positive and forward-looking mindset. Whether by accident or design, Affinity replicates that mindset to some extent. Whilst Haken’s previous albums tended to be quite dark in their general outlook, the mood of Affinity feels much lighter, more assured, more positive. This is reflected in several of the lyrics, notably ‘Earthrise’, ‘The Endless Knot’ and the closing ‘Bound By Gravity’. ‘Earthrise’ sees the human race leaving its home and embracing its own survival in deep space: “Resolve to carry on / Another life awaits beyond the horizon / We’ve all and will assure our survival / We are the revolution.” The unexpectedly dubstep-infused ‘The Endless Knot’ takes a similar can-do attitude (“Close your eyes, stand your ground / Face the wind, never looking back“), but admits that we are sometimes our own worst enemy and often need an imminent threat to unite us and move us to action (“We need a challenge we can overcome / It takes a tragedy to make us one.“), whilst ‘Bound By Gravity’ goes so far as to posit the next stage of human evolution, as we become one with our ever-advancing technology to truly become more than the sum of our parts. Vocalist Ross Jennings is at his very best here, as he emotes his way through one of the band’s most memorable and moving lyrics: “All is love / Our souls collide / A swarm of minds reborn / Then we find euphoria / The storm subsides / Your will is done / A swarm of minds / Reborn as one.” Against the backdrop of one of the band’s most emotive piece of music to date – complete with tubular bells – this is stirring stuff to say the least. As this final track fades out into a blur of Morse code and electronic sounds, evoking the communications we share with each other across the globe as it sits, spinning slowly in the darkness of space, chances are you will come away from hearing Affinity with a reflective smile and a sense of hope, which is enough to make the album an unqualified success – any record that can address such lofty themes in such an emotionally powerful and positive way is one that should be valued. What the lyric to ‘Bound By Gravity’ suggests of us is true also of the album it is housed in: it too is far greater than the sum of its parts.

Affinity is quite simply Haken’s finest record to date. It marks a greater confidence and maturity in their writing, the performances are as sharp and polished as ever, it is beautifully produced – it even boasts perfectly suited cover art that mirrors the 80s aesthetic of the record within. Affinity is more than just Haken’s best record to date, though – it’s also one of the best records you will hear this year. Expect it to feature in many of the now-traditional end-of-year ‘Best Of 2016’ lists. For Haken’s existing fans, then, this is further evidence of the quality of the band they already love; and if you’re not familiar with Haken already, perhaps it is high time that you did. Start here. You will never look back.