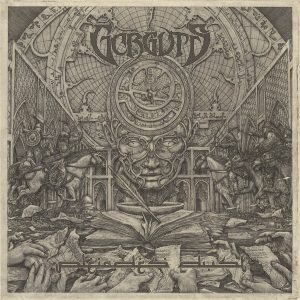 Gorguts has never been known for releasing a great multitude of albums throughout its career. In fact, after the largely critically-acclaimed From Wisdom To Hate, the band went on hiatus for a lengthy time, opting to make a comeback in 2013 years after the heyday of modern and technical death metal in the early part of the new millenium.

That album would be Colored Sands, hailed by many fans and critics as one of the best Gorguts albums of all time and one of the best albums released that year. Colored Sands mixed some rougher edges of From Wisdom To Hate with Obscura dissonance, along with a truckload of ambient staccato play and string sections. Colored Sands was also prominent for one major trait – it featured the production values of bands more suitably obscure, instead of opting for a very polished, clean, digital sound that many bands at the time were making use of. Again, Gorguts wasn’t content with following trends. They broke the mold of atmospheric, anti-technical death metal the likes of which sounded quite original from bands hyped up by that trend, which included premier acts like Portal.

Colored Sands, progressive in the same crunchy-heavy style of riffs that characterized From Wisdom To Hate, merged with stop and go chord transitions from technical death metal juggernaut album Obscura, featured a great deal of ambient string sections and guitar string plucking that lent atmosphere unseen in technical death metal more suitably mainstream. It also omitted the dizzying arpeggio sweep picking that most technical death metal bands appeared more focused on bringing to their albums.  Enter 2016, and Gorguts clearly wants to build on music closer to being a direct descendant from Colored Sands, this time featuring even more atmosphere and staccato play, and less of the crunchy chord transitions that were prevalent on From Wisdom To Hate. This epic one track monster is the EP known as Pleiades’ Dust, perhaps a stop-gap between Colored Sands and a predictably different direction for the new Gorguts full-length album.

It’s a smart guess to say that the new Gorguts album will feature even more emotionally-stirring technical death metal, the likes of which any current trend might never suitably compare to. While Pleiades’ Dust does feature less elements used on the vast, diverse Colored Sands, including the powerful use of a back-up orchestra on Colored Sands track five, ‘The Battle of Chamdo’, Pleiades’ Dust does feature more subtle guitar textures that provide a tantalizing glimpse into what their new album might feature. One thing’s for sure, any Gorguts fan must expect the unexpected with a new Gorguts album. In spite of the great stylistic leaps that the band has taken in the past, Gorguts remains one of the few bands that has largely been known to have never released an album undeserving of the band’s acclaim and stature.

Pleiades’ Dust, I believe, was never meant to present another leap into unknown musical territory for Gorguts. It seeks to entice fans who may have wanted to see more dissonance a la Obscura with their potent use of atmospherics. It could be that the band always planned on following-up Colored Sands with slightly similar material before completely moving on and abandoning the style altogether. Perhaps, this was a track that was leftover for the band’s Colored Sands roster of songs and the band saw it fit to experiment with the track before its release, hence retaining some of Colored Sands’ finest moments with a sound that is largely more atmospheric.

Whatever the band’s plans are, Pleiades’ Dust was never meant to be evaluated as another Gorguts album, because it isn’t. The charming, subtle little leads and classical guitar-influenced staccato play on the EP is proof of some experimentation. The fact is, as similar as the EP sounds to Colored Sands, particularly on production values, Pleiades’ Dust sounds like another great track to whet the appetites of Gorguts fans who loved Colored Sands, but desperately want something new from the band before the band makes another stylistic leap. Whatever that metamorphosis of their music, know that the death growls are still executed brilliantly, lending the fan an ear to the lyrics, the guitars will feature a heavy dose of dissonant chord transitions and textured staccato play, rung notes and string plucking on acoustic guitars to rival any in metal’s vaunted history, and a rhythm section that will morph to the changing time signatures without missing a beat. Every instrument is played to virtuoso excellence, and the track may stop and go between heavy rhythms and ambient sections a whole lot, but this is still predictably Gorguts’ Colored Sands era, and one EP that the band’s fans cannot miss on.