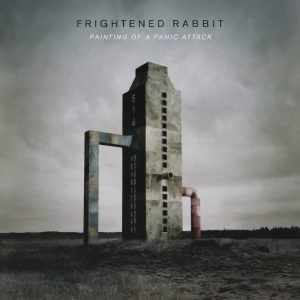 Released on April 8, 2016 via Atlantic Records

It is difficult to picture Frightened Rabbit as an international stadium band yet this is undoubtedly what they have become. It has been almost a decade since The Midnight Organ Fight would be discussed within seemingly secret groups of adoring, empathetic super fans. I feel entitled to use the adjective ‘super’ as it seems to be a universal truth that to know Frightened Rabbit is to love them. Here was a band that had a relatively strong following even as far back as 2006 – a supporting tour with Death Cab For Cutie in 2008 did not diminish their cause. However, The Midnight Organ Fight was so affecting, so personable, that it was the natural feeling that every listener would feel that the album was written just for them and it would be quite frankly bizarre to think of it as attracting mass appeal. Not meaning to disparage their debut, Sing The Greys in any way, but The Midnight Organ Fight just felt more like a best friend than an album.

Fast forward eight years and we have arrived at album number five:  Painting of a Panic Attack. Frightened Rabbit are now deemed mainstream with live performances on primetime American Television. The scratchy guitars and earthy sound have all but disappeared, and in their place we generally have a far cleaner, more accessible sound. For anyone who has been following the trajectory of Frightened Rabbit, and even Hutchinson’s excellent Owl John album, this should come as no real surprise. Opener, ‘Death Dreams’ is a clear indicator of how, for better or worse (inclination dependent), Frightened Rabbit have evolved and matured – built on a simple, poignant piano line and Scott Hutchinson’s falsetto vocals, everything is so…pretty. You can almost picture Hutchinson curled up into a ball on the floor in a darkened room,  while he quivers into the microphone, the lines “You died in my sleep last night, you died in your sleep last night”.

It’s true that Hutchinson’s lyrical breadth has continued to be the cornerstone and, for me at least, the main focal point of Frightened Rabbit’s oeuvre. Tracks such as ‘I wish I was Sober’ and ‘Little Drum’ produce that familiar ‘rush and hit’ of devastating lyricism and beautiful melody. ‘Little Drum’ in particular feels like quintessential Frightened Rabbit – any song which opens with “I was mothered like an orchid tethered to eternal sights” has won me over before the first bar is over. In addition, a Frightened Rabbit chorus hasn’t provided such a feeling of wondrous levitation since ‘Fast Blood’ – every time I hear the line: “I waited for the crash to come”, I feel like my heart is about to explode.

There is undoubtedly great music splattered all over Painting of a Panic Attack, however I do feel it is an interesting point that I was not immediately infatuated by the whole album. The main points of contention are/were with the songs ‘Woke up Hurting’ and ‘Get Out’. These songs have BIG choruses – they are quite literally anthems, designed and built to be sung with big tears and waving lighters.  To give Frightened Rabbit their due, both of these tracks are very well written and do, for all intents and purposes, have that explosive and larger than life quality. ‘Woke up Hurting’ deals with themes that Frightened Rabbit have covered before to great and beautiful effect. However, initially, ‘Woke up Hurting’ seemed to be a little too flaunting and lacking in the usual Frightened Rabbit subtlety and grace. Nevertheless, it is also true that the song is undeniably catchy – as a self-proclaimed fan boy I think the song just needed a little time to ‘settle’. ‘Get Out’ is another earworm that highlights the transient nature of Frightened Rabbit’s progression. It is ultimately a pop song that manages to hold onto that awkward Frightened Rabbit charm. Even when they are at their most prosaic, they still manage to retain a little something that pushes a song over the edge.

Since The Midnight Organ Fight I have never really felt Frightened Rabbit as being an essential ‘album band.’ Their best songs (‘Poke’, ‘Footshooter’) do not really need to be and are not particularly improved by the positions on their respective albums. That is not to say that a full listen of Painting of a Panic Attack should be avoided – it is more an acknowledgement that although there is no significant lack of consistency in quality, the album does feel slightly uneven. For example, having both ‘Woke Up Hurting’ and ‘Get Out’ in the first half of the album does results in a slightly ‘top heavy’ slanting.

It is the slower songs on the album that are the most enticing –  ‘The Wreck’ serves as one of the most poignant, it feels like Hutchinson is lamenting right into your ear. A simple guitar line interjected with some sparse piano drums act as a backdrop as Hutchinson steals the show with this tragic, yet hopeful love song. ‘Blood Under The Bridge’ is poetry set to music and the melodic rhyming couplets of ‘Die Like a Rich Boy’  will instil yourself into your brain with the imagery it conjures : “I want to die like a rich boy diving in a hydrocodone dream”.

When Pedestrian Verse was released in 2013, it truly felt like the departure for the band that is still arguably in transition. It is tough to gauge the path and direction of Frightened Rabbit but I don’t think that this is too important – like any talented band, their sound will fluctuate with every album, yet the quality of music that Frightened Rabbit have produced has not waned. They still have that extraordinary knack to effectively capture the vulnerability and frailty of the human condition. They can knock you back with a phrasing or a lyric; now they just do it to more people.