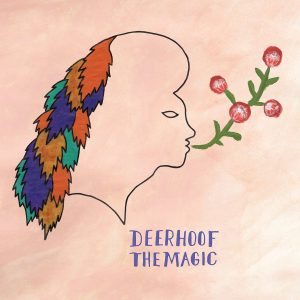 I’ve often aired the opinion  – not that you asked gentle reader – that Deerhoof are rightful successors to the title of America’s Favourite Alternative Band(™) now that Sonic Youth have ignominiously (and let’s face it, acrimoniously) packed up and split into various new factions. The Magic must easily be album number sixteen by now and next year will mark twenty – yes, twenty-years since The Man, The King, The Girl lurched its way out of the San Francisco Bay Area. Arguably Deerhoof are in classic rock band territory, all that’s needed is an induction into the Rock ‘n’ Roll Hall of Fame and a Greatest Hits package and your monster’s transformation will be complete Mr Frankenstein. Let’s not forget either that the current line up – John Dieterich, Ed Rodriguez, Greg Saunier, and Satomi Matsuzaki – all have musical chops to match any of your golden rock gods such as Led Zeppelin on a good day. And they have a lot of good days.

The Magic was recorded, according to the band’s publicity, in about one week with the band using an empty office block as a recording studio. “Maybe it came from the music we liked when we were kids, when music was like magic,” says Saunier, “before we knew about the industry and before there were rules”. Indeed the music business is often just that, a business, sometimes the division between the two is often weighed much more in favour of the one than the other. You could also argue – and you wouldn’t be wrong either – that for a band to exist with ever increasing popularity for over twenty-years and produce nearly as many albums, then you need to be pretty astute at the latter.

But your business, your band, your living is nothing without the music to back it up – and what is especially important to fans and critics alike (here at Echoes and Dust we are both of those) is that the music stays fresh, inventive, passionate, and alive, and that it does so whether it’s album number one or twenty-one that you’re recording. On The Magic, Deerhoof take us back to a time when listening to music was an activity that you did with abandon, without all the pressures and baggage that life heaps upon you, be you fan or band-member. The Magic delivers on what it’s press statement says, (and how often can you say that, given the increasingly bombastic and verbose nature of band PR) which is a mixtape album that touches on punk, pop, glam, hair metal, doo-wop, hip hop, R&B, funk. Saunier again: “…sometimes hair metal is the right choice” and who can argue with that?

From the moment the math-rock Cajun stomp of ‘The Devil And His Anarchic Surrealist Retinue’ kicks the door open you just know you’re in for an hour of great times, and great music, amongst friends that you love. Superlative songs follow thick and fast – the raspberry blue bubblegum pop of ‘Kafe Mania!’ followed up by the raw garage punk of ‘That Ain’t No Life To Me’, and its “You were born to be my grave” lyrics, no doubt referencing The Stooges in their sordid pomp. This opening triumvirate, if nothing else, sets the pattern for the rest of the record, life affirming anthemic fist wavers, set alongside old-school rock, with a dash of Deerhoof madness, and leftfield, experimental pop. ‘Learning to Apologise Effectively’, ‘Debut’, ‘Little Hollywood’ – the hits, and indeed – the feels, come thick and fast.

Let’s face facts – each song is so strong that they deserves an essay of their own: whether it’s the uplifting P-Funk majesty of ‘Life Is Suffering’ with its fidgety coda in which the band play for their lives (and which also will have the more energetic amongst you springing off the ceiling); Or you may choose from the dreamy opening slavos of ‘Criminals of the Dream’ as your album highlight. There’s even time to include a brief cover of The Ink Spots classic R&B number ‘I Don’t Want To Set The World On Fire’, and following that the 80’s hair metal of ‘Acceptance Speech’, so 1980s was it that I could feel the hair in my ears being back-combed. There’s just something about that slightly off keyboard sound that’s irresistible, not to mention Matsuzaki’s vocals, which soar above the accompaniment like a Manga superhero. The throwaway glamrock posturing of ‘Plastic Thrills’ is a brilliant work of tiny genius while ‘Nurse Me’ is something of a return to traditional Deerhoof forms (if there is such a thing) and wouldn’t be out of place on the Apple O, or Milk Man sessions. Jerky, off-kilter, and with those trademark Speak-And-Spell vocals – I can certainly guarantee if you see them live you’ll be singing “Hospital! Hospital!” over and over like the demented kiddy you surely are.

So was a week in an empty New Mexico serviced office time well spent? Of course I’m going to say it was. The Magic is classic Deerhoof – experimental, bold, audacious, weird. The whole thing is – as ever with this band – a seemingly light confectionery. Like a souffle or an Angel Delight, the whole record is riven with a sweet offbeat kookiness that never becomes cloying, affected, or over-wrought, but threatens to dissolve or collapse should you dig into it too deeply. Glossy surface is everything here with Satomi Matsuzaki’s voice rising to the top of every cheesy groove and stunt guitar and synth (although, as is the case these days, vocal duties are shared democratically). Of course it’s backed up, quite considerably, by the exemplary musicianship on display. As I said at the top, this is our Led Zeppelin. Deerhoof will always be to my mind an iron fist in a velvet glove – something from which, a lot of bands which label themselves as Indie, could learn.

So the super-friendly hit record of the summer. If you can catch them at a festival do so as it’ll be more than worth your while. You are going to try and catch them live aren’t you? You are? Top marks.