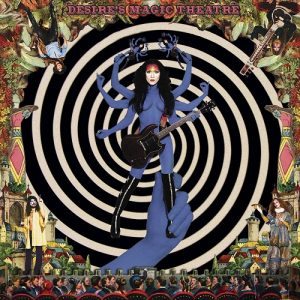 Released on April 29, 2016 via Spinefarm Records

British self-styled psychedelic rockers Purson made a substantial impact with their debut album, 2013’s The Circle and the Blue Door. Mixing psychedelic tendencies with gothic horror tropes and sturdy riffing, the band appealed to a broad cross-section of music fans: everyone from indie rockers to metal fans seemed to find something in the band’s sound that they enjoyed. Plagued by line-up changes in their early days, the band nevertheless attracted a large and loyal audience with regular gigging, and even some high-profile support slots, including an invitation from none other than rock legends Kiss to come and play on their ‘Kiss Kruise’. The loyalty they inspired was evidently noticed, and this, their second full-length album, is being released by Spinefarm Records.

Desire’s Magic Theatre is altogether a more playful record than The Circle and The Blue Door; whilst that record certainly possessed some quirky humour, it had a bleaker, darker feel – the shadows were never too far away. Desire’s Magic Theatre nails its heavily-saturated colours to the mast before you even start to play it, its consciously psychedelic cover art providing a clear pointer to the music within. If the cover art doesn’t forewarn you of the nature of the record, a brief consideration of the album title – abbreviation DMT (which is also shorthand for dimethyltryptamine, a noted psychedelic) – is another of the myriad playful references that pepper this album like buckshot from a surrealistic rifle.

There’s another important difference between this record and its predecessor: this time it’s not such a group endeavour. For Desire’s Magic Theatre is very much the work of guitarist/vocalist/songwriter Rosalie Cunningham – so much so that it is essentially a solo album. Aside from the drums, played by Purson’s Raphael Mura, and a few guitar parts played by the band’s guitarist George Hudson, Cunningham played all the instruments, as well as writing the songs, singing everything and producing the album. First and foremost, it has to be said that Cunningham does a magnificent job, not least because there are frequent instances where songs veer off on cosmic jams and somehow Cunningham has managed to make these moments feel genuinely organic – there’s a definite feel of a live band given the room to cut loose throughout the album, which is no mean feat given Cunningham’s decision to play almost everything herself.

The band have said that the album is a tribute of sorts to “our good friends Sarge Pepper and Zig Stardust”, and pleasingly, that’s exactly the feel that they have achieved. Like those two albums, whilst the album isn’t a linear, story-telling concept album in the classic sense, it inhabits its own specific world, managing to retain a cohesive feel without sacrificing variety. The colourful characters that inhabit the songs are drawn with the same affectionate whimsy that the Beatles and Bowie employed when writing their classic albums, and there’s an affection for brass, flute, woozy organs and kaleidoscopic guitar soloing throughout DMT that echoes the era in which Sgt. Pepper’s Lonely Hearts Club Band and The Rise And Fall Of Ziggy Stardust And The Spiders From Mars was created. Purson have always worn their influences very much on their sleeves, with their flamboyant stage attire and the psychedelic stylings of their promo videos and artwork, so it is no surprise to see the level of fondness that Cunningham in particular evidently feels for the late 60s/early 70s; it clearly was, and remains, an unending source of inspiration for her and her band.

However, this is no empty exercise in nostalgia, no empty-headed pastiche. Within the tropes of that period lie more contemporary touches, such as the grinding stoner riffing of the opening title track and the thunderous bass line of ‘The Window Cleaner’, which recall Black Sabbath or that band’s doomier acolytes. Whilst the gothic flourishes that marked The Circle and the Blue Door‘s heart of darkness are virtually absent here, this tougher rock feel sets Purson’s new material up as far more than homage; it gives them a sturdy, darker edge, for all the swirling psychedelia. Purson’s recent live pairing with Ghost makes a great deal of sense: both bands draw inspiration from the music and media of the late 60s/early 70s, but filter it through more contemporary approaches to writing and production to great effect. Both have characterful live shows, and both bands require a certain amount of willing suspension of disbelief to enter their respective musical worlds. In a world where workmanlike authenticity is still all too often applauded at the expense of more imaginative fare, Purson, like Ghost, are underdogs with the music to expand minds.

There are no shortage of highlights: the chunky riffing of the title track and its delirious instrumental coda; the billowing ballad ‘The Sky Parade’, with its fuzzy bass and skyscraping chorus, spiralling inexorably into a kaleidoscopic haze of feedback; the sensational extended wah-wah guitar and organ interplay of the playfully dark ‘Mr. Howard’; the wry lyric and chiming 70s should-have-known-better acoustic balladry of ‘I Know’; the chugging carefree bluesy coda to album closer ‘The Bitter Suite’ – to mention but a few. The playing throughout is wonderful, and Cunningham’s vocals have never been better.

Desire’s Magic Theatre clocks in at 44 minutes (unless you’ve got the deluxe edition, which by the way is well worth the extra outlay for the additional tracks), yet so much seems to happen in that time that it feels longer, without ever feeling drawn-out. The songs are tightly focused, but that live band feel is never sacrificed, resulting in a few positively exhilarating extended wig-outs and instrumental codas that add a great deal of character to proceedings. The words “concept album” are thrown around with careless abandon these days, but even without a single obvious thread, DMT is deserving of the mantle. Quite apart from the framing device (the sound of a rumbling train opens and closes the album), there’s a seemingly effortless cohesiveness to the album that lends it the feel of a much-loved, well-thumbed book from the moment you hit play or drop the needle. At once familiar and gleamingly new, fresh yet ageless, DMT is an enormous forward step for Purson. It’s a much more ambitious – and better produced, so that’s another string to Cunningham’s bow – record than their debut, and hints at even greater delights in store. Cunningham’s vision and dedication have paid off in spades. This is a glorious record, as playful, inventive and full of heart as the records that inspired its creation.