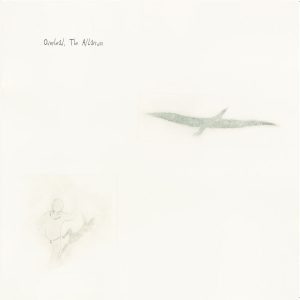 It’s here!! It’s here!! The debut full length album from Overhead, The Albatross is finally here to grace our ears, mind, and spirit. And oh boy what an instrumental juggernaut it is!

We were teased with ‘Telekinetic Forest Guard’ in February 2014. And then painfully forced to bide our time for another 18 months for the release of ‘Big River Man’ in August of 2015. It was accompanied by an official video which highlighted a cylindrical view of each band member (and a gang-load of others), gyrating and completely feeling the aural sentiment. And WOW, to see the string and horn musicians properly featured and included – well done fellas! But seriously, 18 Months?! Way to make a guy suffer! Thankfully the ‘Indie Rose’ video came along to wet our whistle in March of 2015 and to keep us all at bay. At least for a short period…

‘Indie Rose’ is a slower affair than we might be used to, but still the best album-opener that they could have summoned up, as it offers a more easygoing groove, yet still with full accompaniment. I hesitate to admit that upon the first listen, I wasn’t taken by this track. But now, it could possibly be my favorite track on the album. The slower crescendo hides so many different textures that I had (regretfully) missed on my initial listen.

At first lick, ‘Telekinetic Forest Guard’ takes you back to the formula of old that made us love the band in the first place. Their masterful incorporation of strings and horns into their arrangements has probably never been more apparent than in this song. ‘Theme for a Promise’ is a short but sweet piano serenade that does not flow into ‘Daeku’ in a way that one might think. But is a wonderful precursor to the aforementioned as it embodies all of the strokes that a lover of the keys can immerse themselves. ‘Daeku’ on the other hand, is an entirely different beast. Guitar and piano dominate the first portion of this track and then the violins take over and carry you away on a magic carpet ride of whimsy and poise.

That is just the first half of the album… Allow me to take a moment to say that Overhead, The Albatross has truly out-done themselves with this release. The wait may have been excruciating, but good things come to those who wait.

‘HBG’ starts with a bouncy beat and then dips into a brief period of core melody examination. From there it never lets up, and only builds on the previously laid foundation. Bass guitar also furthers the cadence and adds a deeper grace which can only be attained from lower frequencies. ‘Leave It To My Ghost’ acts as another interlude, but should be heard as its own entity, regardless how minimal it may appear. It also includes a spoken-word poem written by one of the guitarists. It is weighty, profound, insightful, and delivered in a distant vocal glitch to intensify meaning.

‘Paroxysm’ seems too off-center and, in my opinion, does not fit into the album flow. But in all likelihood, it is my lack of understanding concerning their intended gait. The raucous electronic heavy output still incorporates the artistic freedom displayed prior. Keys, strings, and a dynamic drumline are (of course) forever present. With ‘Bara’ my thoughts are that this is so BEAUTIFUL that it cannot be defined by mere words (in any language), and that I am ill-equipped to properly describe this track. Call me enamored, bewitched, and taken!! But ‘Bara’ personifies everything that I LOVE about instrumental music. Contained are the genre cliché crescendos, confident command of all instruments, and everyone taking their turn in the love of simply playing; allowing their “being” to shine. As for ‘Big River Man’, I think I said it all (fanboy) in my explanation of their video – such a great album footer that encompasses everything Learning To Growl is trying to say.

If I have neglected to say it prior, the bass and percussion on this album are worthy of the top shelf and triumph in the framing of this masterpiece. I have been pleasantly surprised in recent years by bands’ rhythm sections standing up and demanding to be heard as more than just beat keepers and background support. And Overhead, The Albatross leave nothing to be desired. I could easily be satiated by just a drum track of the entire album. And that bass – there are so many tones and hertz realized by just a few girthy strings. I suggest Overhead, The Albatross submit a patent on the sound they have been able to achieve as it is almost palpable how they are able to make their instruments come to life and bring joy to our ears.

In closing, regarding Overhead, The Albatross, an incredibly well-(musically)-travelled friend of mine once said, “They can do no wrong in my ears”, and I wholeheartedly concur. I would LOVE to sequester these dudes in a room for a month and pierce them with questions regarding their influences, life experiences, their inspirations, and how they all relate to the music they have conjured, as it is hard for me to fathom what they have produced here. There is so much emotion, both on the surface, and residing in the undercurrent. Be it pain, hope, misery, joy, agony, and/or cheerful buoyancy. There is such a broad spectrum of melodic delight to bathe in on this release. I hear it all, but I will I let you decide what speaks to you the most. As for me, I am a FANBOY!!! Just sayin’…