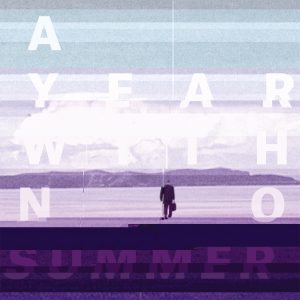 A Year With No Summer is the second album by Catalan Spanish rock wranglers Obsidian Kingdom – and very, very good it is too. If, like me, you were impressed last year by the sacrificial offerings from Caspian and Teeth of The Sea, then you’ll find plenty on this record to like – well no, not just like – love. Indeed how could you possibly not love a band whose members go by the names of Rider G Omega (guitars and vocals), Ojete Mordaza II (drums), Seerborn Ape Tot (keyboards), Om Rex Orale (bass),  and the wonderfully monikered Eaten Roll I (guitars). I suspect they’re not being entirely serious, but when the music is this good – who cares.

“I heard it on the news today” the record begins, “This year there will be no summer”. Well, I grew up in Wales and that was always the case, but it becomes clear – with repeated listening – that summer itself is a metaphor for that mystical, unobtainable goal of human contentment. The album is troubled, the music dolorous, its messages scratched graffiti like onto bathroom walls, the last desperate attempt by a back alley Socrates to bring some sense back to the human race. A sunny holiday on the Costa Del Sol this isn’t, rather it’s an apocalyptic urban sprawl of trauma, darkness, and bleak places.

Every track, perhaps with the exception of ‘The Polyarnik’, which acts as a brief flash of sunlight across the furrowed black clouds, sets out to pulverise you and turn your no-doubt beautiful flesh into jelly. Every number on the record is huge, really huge, and hangs over you like some massive asteroid that could drop out of the sky at any given moment and ruin your day. Given that the band also play a live, partly improvised, drone set on a regular basis also gives you a clue to the sonic origins of this record.

There’s so much intensity here when the whole band machine is fired up – which put me in mind of Anna Von Hausswolff’s release late last year – in that it combines the satin black imagery with some of the most euphoric drone that I’ve heard on record this year.  There’s also a pop/rock songwriting eye for catchy hooks at play too, which stops the whole thing from gazing too hard at the abyss, or into its naval, or whatever you might want to call it this week.

But c’mon – ‘Darkness’ is an awesome number; “One day the skies will dye white / Lay bare the bones of buildings / And the screams will fill these dirty streets” sings Omega (The End, get it) verbally painting visions of a city bleached white by the atom splitting convulsions of some dread weapon of war. ‘The Kandinsky Group’ – perhaps the dark heart of the record – is a cautionary tale of sleepwalking into a society that, to paraphrase the ideas of Aldous Huxley, is amusing itself to death. It certainly seems to draw on the early catastrophic visions of Wassily Kandinsky and presents some sonic interpretation of the same.

Silly names aside, the band’s commitment to their sound and their craft is exemplary. Mordaza’s drums and Rex Orale’s bass create a huge sound canvas on which the other musicians can work. Either listening through headphones or via speakers that drum/bass combination is extraordinary at times, one moment noodling in complicated patterns to please the prog rock freaks and another time pounding as bad and as hard as any black-metal combo. The double guitars of Omega and Eaten Roll soar above the rhythm section in any number of fractal patterned combinations, always with total commitment to the attack and sometimes seriously funky. Ape Tot’s keys give the final flourish to music depending on the mood of each song – from warm full Hammond Doors style organ to icily cold, inorganic robotic drones that pierce the heart like smashed glass If I have a criticism of the sound, it’s that the vocals sometimes appear quite lost in the mix, rather like a mountain climber in a snowstorm Omega’s voice seems to be desperately gripping onto slippery rocks with cold and bleeding fingers. I had to look the lyrics up, which although not a major problem, it sometimes stops the shades of  meaning from getting through, and certainly some of the puns.

If you like your post-rock (whatever that is) with a bit of a prog rock twist (whatever that is) then you should find every itch scratched by spending time in the company of these seven gloriously paranoid tracks. Let’s hope for some live dates in the UK.