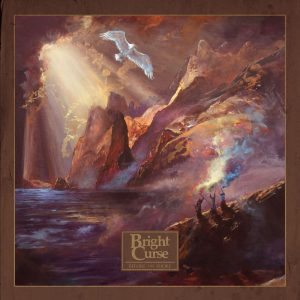 Well call me Captain Obvious, but psych has had quite the resurgence over the past few years. Not in bands occupying the space, as they have always been present, but more of a resurgence of appreciation in what the style can achieve, in overcoming certain platitudes and barriers, and also in the coverage of underground indie scenes across the globe. Call it what you may, but in truth psych has dominated the recent soundscape. With my personal exposure being infantile and remedial in comparison to others, I do consider myself a devotee and lover of music, and all things borne of originality and emotion. While I’d hardly consider myself an authority, more than a glut has entered my ears and Bright Curse have definitely left a mark on the underground scene, and of course ME.

Amongst the vanguard, there have also been an excess of copycats and coattail riders. Bright Curse are the furthest from that description. With two EPs under their belt, these genre-label defying chaps return with a 7 track release titled Before The Shore due out on the venerable HeviSike Records this coming May 13th. And even though it is only 7 songs in length, 42 minutes elapse in what feels like just a blink. This speaks volumes to one whose attention span is not easily captured in relation to music.

So many aspects of Before The Shore touch on all the different planes of my auditory upbringing and also my current fixations. From the effortlessly absorbed good ole rock ‘n’ roll melodic guitar riffs and bluesy picking of Romain Daut strewn throughout, to the rhythmically masterful basslines which newcomer Max Ternebring offers up for our pleasure, and the drum fills, both in full assault mode and in moody reservation, that Zacharie Mizzi exhibits only further and advance the skill of Bright Curse as a thorough and cohesive unit of analog aptitude….. Hell, you will even hear an organ solo (musician unknown) that is reminiscent of Ray Manzarek’s many tripped out escapades of key crashing bliss.

Bright Curse are able tell a story wholly within their accompaniment, regardless of lyrics, and also surely understand how to properly to fashion a song in order to touch on every part of our spirit. There are evident peaks and valleys in their narrative. And at each end of the spectrum of extremes you will find a grain that grazes, if not collides, with every surface of your audible rationale. These spectrum spanning extremes manifest in the throes of distortion, reticent blues weighted guitar picking, somber melodic moments respite from the discordance, and full out disregard for the obstacles placed by the style of music claimed.

Bright Curse’s lyrics (Romain and Max are both cited for authorship) are at times esoteric, and belonging entirely to reality all their’ own. With oral arguments that burnish the surface of themes such as malicious lovers, the pros and cons of religion/faith, and wrestling with the internal acceptance of emotions that exist just beyond our control and grip of fully understanding their purpose. It seems as if Before The Shore is shaped to be a concept album. However, I am not entirely able to grasp the concept proposed. Call it my ignorance or lack of enlightenment, but so be it. And not to discount the labors and skill of Zach and Max in the Bright Curse equation, but I believe Romain Daut should be considered amongst the best wailers in our modern age of vocalists. He can belt out passionate vocals with grit and clarity, and still nail a delicate delivery demanding restraint and subtlety.

In short, Bright Curse are a deeply impassioned 3 piece who play with vigor and intensity. And while you will not find uber-technical riffing, you WILL hear a collection of damn good tunes. I have been hard pressed to listen to anything else for the past month or so. Do yourself a favor and listen, or get left behind on a band who can occupy so many facets of hard rock.