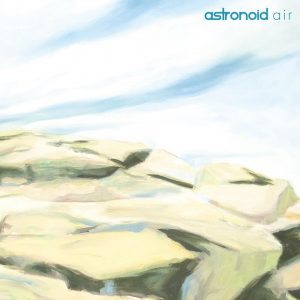 Listen, I don’t want to get all ‘grown men cry’ on you, but be warned: there are parts of this album where the melody grabs you so hard that even the most hard-bitten, stoic heavy-music fan, in a private setting of course, may have a little, you know… moment.

Hold on, I’ll back up a bit. First things first: this band, from Massachusetts, who share a member with the east coast USA post-metal outfit Vittnat Viskar, bill themselves as shoegaze metal or dream thrash, although their sound is closer to post-metal or atmospheric black metal. This is their first full album. And man is it a big slab of melodic joy. Words like ‘epic’ and ‘anthemic’ get thrown around like confetti when people describe music of this type, but with this album, with its massive major-key progressions and angelic vocals, there is no other way to describe it.

Oh, don’t worry, it is still heavy. And with its triple guitar assault (Three! Like two just weren’t enough) it packs a huge wall of noise.

But what sets Astronoid apart from every other blast-beating, rapid-strumming band of this nature is that the vocals are sung. Like properly sung – beautifully. Like nymphs flitting around a cauldron of lava. And the melodies that the vocalist (or vocalists – it’s hard to tell if they are layered or there are two people singing in close harmony, and the album arrived with zero information) sings are matched with anthemic, rising fifths, sixths and relative inversions that hit you in the gut and give you goose bumps. That their chord progressions prompt such a reaction is no surprise; they are the same as  Beethoven used to make people gasp in rapture.

And it starts from the very first track, ‘Incandescent’. A brief period of clean, ethereal guitar is smashed out of the way by the entire band, who serve up a few sweet slabs of sonic gloss, before the vocals kick in. The second track, ‘Up and Atom’ is where the melodies really provoke a reaction, in particular the chorus. It begins with a shimmering guitar trill that brings to mind the undiluted positivity of when Bill and Ted actually learned to play in the protagonists’ ‘Bogus Journey’ (please excuse the trivial reference here; it should be taken as a compliment – I have very fond memories of the Bill and Ted years). And when it launches into the half-speed chorus, with its talk of “We’ll drift far away”… Man. It really takes you away.

I could go on about the hooks in the rest of the album – the regal drop into the chorus of ‘Homesick’, or the rising sixth of the “Sunshine on my face” lyric in the chorus of ‘Tin Foil Hats’ that Bruce Dickinson would be proud of, or the entire title track,  for instance – but that would spoil the thrill of discovery.

The lyrics themselves, throughout the album, are another point of difference to other heavy music. The overarching theme is space and the songs broach subjects like yearning for escape, of searching (for what, it isn’t clear) and of feeling like they’re is something worth looking for. Things almost get spiritual in places – and with the anthemic music this could almost be construed as a religious experience, if a deity had been mentioned.

Because of its prolific use of button-pushing melodies, the tuneful singing and lyrics devoid of despair, there will be some who will dismiss this album as a ‘guilty pleasure’. And there will be others who will accuse the album of being a little on the bombastic side. But show me a metal album without any bombast.

Yes, the album may be difficult to stomach in one sitting if you’re not in the mood, just as you may baulk at the idea of eating an entire chocolate fudge cake first thing in the morning. But that doesn’t mean the cake – or this album of sweet melodies offset by a wall of guitars – is bad. To dismiss this as such would be to miss out.

Who knows? Maybe Air is the product of a guitar-wielding cult, surreptitiously getting its message under listeners’ skin with its doctrine coded in this beautiful yet powerful post-metal. And I’ve been sucked in. Whatever. All I know is that there is some stunning music here, and to call it shoegaze metal is wrong. This isn’t music for staring at your feet. It’s for gazing at the sky.