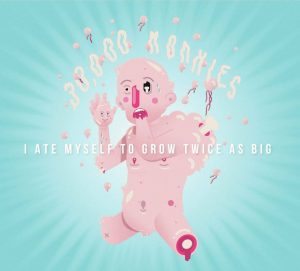 Released on April 16, 2016 via Consouling Sounds

If you can see past the names there’s plenty to enjoy on this debut album from Belgian sludge-lords 30,000 Monkies. So what do Beringen’s finest have to offer? Something between Sleep and Merzbow if you believe the blurb over on their Bandcamp site.

Things start off conventionally enough with ‘Melæna’, and the all too short ‘Coproliet’. It’s the sound of a band setting out their stall, and it’s decently heavy; barked vocals over speaker wrecking, squalling, guitars – it’s okay – until, that is, ‘Coccinelle’ starts up and thing start to get seriously weird.

Some of you may recall the first time you heard Celtic Frost, that unique blend of death-metal and the avant-garde. Here was music that took a different route to your musical pleasure spots, and more often than not, made you sit up and think “Whoa? What?”, and often made you think that more than once. So it is with ‘Coccinelle’, marrying as it does Pink Floyd Piper At The Gates of Dawn era Syd Barrett vocals with sludge thicker and blacker than anything that ever spilled out of the Exxon Valdez.

The band, no doubt being perverse intelligences, follow ‘Coccinelle’ with monolithic ‘Mountainesque II’, ‘Mountainesque I’ follows later, and taken together both parts really highlight the interplay between Ruben Savelkoul and Michiel De Naegels’ guitars and the fire and brimstone rhythm section of bassist Igor Vuch and drummer Dries Schreurs. In between both parts ‘Apollo 10′, provides chilling, lonely, space age drones that perhaps look backward to the heroic days of space exploration, as the madness of the void sweeps across you in some kind of twisted intermission. The playing here – and elsewhere on the record if we’re totally honest – really is on the button: insane, ferociously intense, and somehow seemingly always on the brink of implosion.

The seventh and final song is ‘Juice’, 12 minutes split in almost equal parts between pounding, repetitive stoner-rock which is as thickly spread as its Tangerine Dream style second half synthesizer work-out is icily thin.

There are some great contrasts on this record, from heavy duty drone to almost psychedelic dream like twists that, perversely, are almost soothing on a record this heavy. Well you wouldn’t expect anything else from a Consouling Sounds band. We very much liked their EPs (Somewhere Over The Painbow / Womb Eater Wife Beater) here at Echoes and Dust and we’re sure you’ll like the long-player too. A terrific debut.