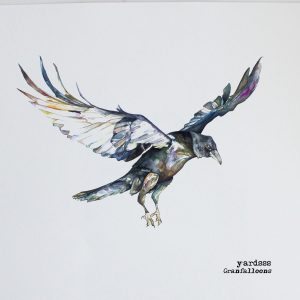 This review is being written pretty late and usually, that would mean it was off the table but, Granfalloons is an essential listen and it’d be dishonest for me to not sit and pontificate about how good it is for at least a little while.

Five steps to take before you listen to this album: one get comfortable; two turn off the lights; three position a large bowl or basin between your legs; step four ready your music player; step five fondly reminisce about all the years your brain was a physical entity instead of a pile of goop.

An infinite sky of pads and synths, effects and drones floods the listener’s ears. Beautiful dark bass brooding beneath the surface. Soft, heartbeats of a drum palpitating in the fathoms below. A soothing chime of seraphim song pads fluttering overhead as the chorus plucks out a sublime melody in the background. A baptism in ambience; total sonic immersion. ‘I’ births the album into an exultant start that builds from divine ambient electronica into cranial electronic psyche-pop. A splendid conclusion ascends soothing iridescent vocals into the sky via loopy synth bubbles.

‘II’. A rapturous ocean of warm pads. Tranquillising samples of a scratching sound. A droning psychedelic guitar calmly sweltering. Meditative lead vocals carry the track through a sedative psychedelic voyage whilst backing vocals serenade the listener on the sideline. The track builds into a synth organ flurry reminiscent of early Pink Floyd and tracks like Won’t Get Fooled Again by The Who before crumpling in on itself to a satisfying conclusion.

Ever heard Yuck or Unknown Mortal Orchestra on acid? ‘III’ enters the album as a tranquillising soother of indie pop soaked in noise and psychedelia. Whirling machines dance around the ear. The drums crumble into reverberated beacons of percussion. Every buzzing, whirling, twirling element a Flaming Lips-esque ocean of cascading cool in a wave of laid back insouciance.

If its pads didn’t swelter so abrasively, ‘IV’ might just have one hell of a funky opening but, funk is dead and acidic psychedelic pop is riding its corpse like a boogie board down the river styx.
Recently, images were released of A.I’s perception of how we see the world. The images were a sea of sickly colours, eyes always watching in every conceivable place and every possible geometric match to a cute animals face was utilised as such. The images do not show us reality as we see it, they show us reality as we experience it, watched all the time, obsessed with puppies and kittens, attempting to be everything at once and an individual at the same time (whilst likely being nothing at all in the grand scheme of things). If these images could sing, I imagine they’d sing Granfalloons. The dense layering of the forth movement is almost overwhelming and sickly in its frequency spanning, pineal gland shattering tones. The ear wrenching squelch of reality splintering beneath the surface. Relentless multi-faceted instrumentation and timbre; chaos and harmony. An overwhelming aural labyrinth like all of humanity gathered in one instant and made a psychedelic shoegaze track designed to communicate with life on another planet. All our joy unraveled into one chaotic mass of life on earth; crashing and singing and smiling and gnashing with ears ringing and shrapnel flying; it ultimately lands as a track of immense, overwhelming substance and magnificence.

The final transmogrification of Granfalloons, takes this amalgamated bricolage of sonic insanity to the extreme and it is beautiful. Recycling elements from seemingly every track it enters with warm radiating synths oscillating mechanically beneath sublime droplets of piano that trickle down through the violent electronic sound bed. Each element builds slowly to an eruption that breaks apart and dissolves like the uneasy yet, strangely satisfying moment when a log snaps at its finest embers breaking into two distinct, burning parts, still warm where they were once joined together.

Granfalloons is a masterfully cohesive listen not for the faint of heart; immerse yourself in chaos and find wabi-sabi in the soothing ferocity of an album straddling shoegaze, electronica and psychedelia as one unifying tone for the present day. Granfalloons will blow your fucking mind.