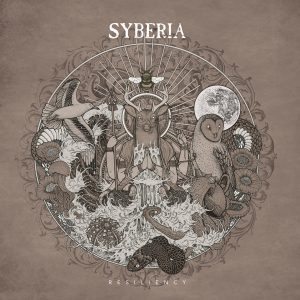 There is one thing you can count on from Spain. And that is tried and true post-rock/metal. With that I offer up for your ears Syberia’s latest effort titled Resiliency. We have all been waiting for close to four years now and these lively instrumentalists are back with a follow up to their debut long player Drawing A Future, which was marginally heavier by nature, but undeniably left us wanting to hear more. The wait is finally over. Resiliency is set for release through Debemur Morti Productions on April 22nd, and will be available in all formats.

Syberia’s most recent work certainly leans towards the lighter end of what is generally accepted as post-metal. But for those whose preference is crunchier riffage, do not fret as there is still plenty to be found within. However, Syberia display a much greater range in style with this release. And at times, although brief, toeing the line of what could be considered prog rock. But also including restrained electronic and synth additions that compliment, but do not distract you. All too often bands tend to be more heavy handed with digital enhancements instead of just dabbling. Syberia’s contribution seems to be more organic and flowing. In fact the background synths found in the interludes of both ‘Ashfall’ and ‘Fortress’ are a welcome respite from the analog exertion that abounds to and fro. To speak further of their range, I hear a much more well-rounded approach to their music in allowing themselves to survey both the dark and light, which culminates in a happy medium of dreamy discomfort.

Without even a hiccup of hesitation I state that Resiliency is an album in which you can press play and let it ride. There was not a moment I found myself wanting to skip to the next track. I personally own quite an extensive library of post-rock/metal and I can say that Syberia’s Resiliency will remain in my rotation for years to come. As Drawing A Future also has always been in my constant cue, and I implore you to increase your acceptable input and listen to Syberia.

You will not find the typical heavy crescendo-core here. More of an examination of the subtleties possible around achieving a heavy melodic sound. Syberia teeter totter between effects derived from graceful pedal effect volume management to in your face full accompaniment intended to make everyone sit back and take notice.