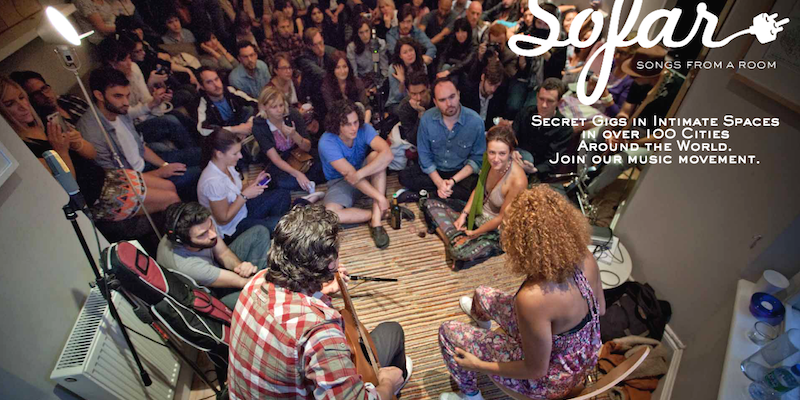 Sofar sounds is an interesting concept, apparently born out of the desire of the organisers to get people to actually pay attention to the music, not talk or stare at their phones. A sentiment that I’m sure many musicians and serious gig goers would appreciate. The premise is that you ‘apply’ for a ticket, you know the rough location, the time, and that’s it. The day before you get a message telling you where the venue is and what the rules are. Doors open for half an hour, and if you’re late then you must wait to be allowed in (so as not to disturb the musicians). The gigs are ‘pay what you want’, the suggested donation for Manchester was £10 (that did include a +1).

The location, Ziferblat, in Manchester’s Northern Quarter is as unusual as the premise of the gig. Everything here is essentially free, though you pay for the time you are there. The gig was in a back room, and we were greeted by a friendly guy who explained what was going on. Phones on silent, no talking during the performances, soft drinks and cakes provided. Please sit on the floor and make yourselves comfortable. It would have been a good idea to bring something to sit on, two hours on a wooden floor wasn’t exactly luxury! Other attendees were a bit more organised and had cushions, blankets, food and drinks. The atmosphere felt more like a house party than a gig – relaxed and intimate.

The opening act Keeva, from London, was a female solo singer/ guitarist. She introduced herself, and although seemingly nervous, was warm and funny. Songs, by her admission, we’re mostly about ‘why boys are so mean’, evidently personal and had a lot of meaning. She played soft, finger-style guitar, unamplified. Despite her age (22) her naturally powerful voice filled the room. She did a wonderful cover of Georgia on my Mind, her voice and the distinctive chord progression was a lovely combination. None of the songs really stood out but the overall effect was good, very fitting for the venue and the general atmosphere.

Next were Easy Kill, describing themselves as ‘doom-pop’. Two out of the four Manchester-based band members were playing, Theo Tobias on guitar and vocals and Andy Keaveney on guitar/keyboard and backing vocals. Tobias’ vocals are unconventional, seemed slightly affected at times. The band’s sound, although evidently stripped down for this gig, is detailed and nuanced. Lyrics are creative with many uses of a Morrissey-esque turn of phrase. Initially, I wasn’t blown away but listening to their recorded material this is a band who require a little bit of patience. This is not run-of-the-mill, three-chord indie stuff, and would be interesting to see how the whole band sounds in a live setting.

The third act of the evening were Solomon Grey. Comprised of composers Tom Kingston and Joe Wilson together with a collection of keyboards, electronics, a loop pedal and a totally, if completely unexpected, voice. Their songs, were constructed and built rather than just played. Tom and Joe, evidently know each other well and work as a unit. Ethereal soundscapes and eerie falsetto vocals are used to stunning effect. This is music to be lost in, glancing around the room I was evidently not the only one thinking the same. A couple of times things didn’t quite go as planned, that’s live music though. The complexity and the obvious talent of these guys shines through. This was a case of the right band, in the right venue, at the right time. After the short set, a few of the crowd shouted for an encore, which after fervent button pushing and furrowing of brows was duly delivered.

Apparently, they played to two people in a record shop in Manchester city centre the day before which is hard to believe. People in Manchester usually have better taste. A great performance by two genuinely talented chaps who really deserve a wider audience. Overall, an enjoyable night and something a little different.