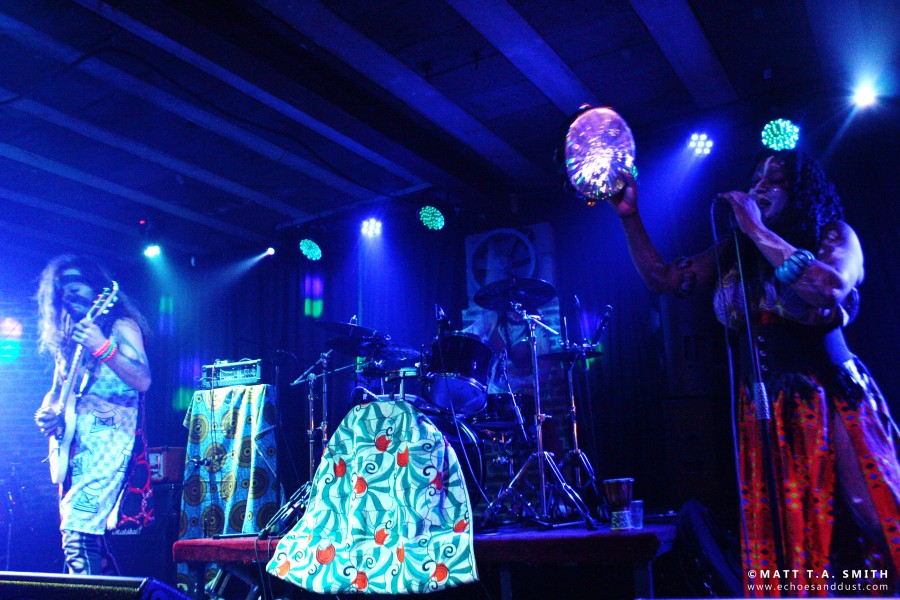 Metal all-dayers are, in my experience, very much a hit-and-miss affair. Sure, the most obvious aspect for the organiser to perfect is a running order packed full of exciting, high calibre, and varied bands, which is of course no small feat in itself, but a successful day-long festival involves so much more. How to accommodate an assembly of sweaty metalheads in a darkened room for 12 hours without ensuring that they’ll get bored and wander off after the first few bands? Is there an ample beer supply? Things to distract from the inevitable waiting-around-while-the-next-band-tunes-up time? A smoking area that isn’t reminiscent of A New Hope‘s trash compactor? Thankfully, NOIZ Promotions and Manchester’s new-ish venue Rebellion have absolutely nailed all of these aspects and more, offering punters a most excellent day out (or rather, in).

The combination of today’s venue and crowd gathered within gives off an instantly cosy and inviting feel. From the bear hugs and cheersing of beers whenever old friends walk through the doors, to the constant intermingling of crowd and bands throughout the day that ensures a proper DIY vibe, there’s a real sense of sludgy family atmosphere at today’s NOIZ All-Dayer. Just as important as the stage and pit is a substantial merch area off to the side packed full of not only the usual shirts and records, but handmade jewellery and prints for sale by local illustrators, custom guitars and pedals hooked up to the PA available for people to noodle around on between bands’ sets, sofas to chill out on, and even an electric fireplace. However, almost as impressive as what’s here is what’s not here; no brutish security, no exclusive VIP area, no arrogant roadies, no annoying children, no bored partners who’ve been dragged along by their other halves… Just a tight-knit metal community supporting some of the scene’s most exciting bands. It’s respectful, and frankly, it’s beautiful.

Initially invited along to review Limb and Vodun, playing today as a stop on their April UK joint tour, a last-minute switch up in the day’s running order meant I also caught Dystopian Future Movies and Fvnerals, themselves last-minute additions to the bill following the cancellation of their show at the nearby Star and Garter.

Vodun take to the stage amongst billowing smoke, clad in their trademark tribal dress and body paint, although waste no time in proving that theirs is a performance of substance over style, launching into a powerful ‘Loa’s Kingdom’. Frontwoman Chantal Brown (AKA ‘Oya’)’s formidable vocals shine throughout the band’s set, backed by remarkable ferocity from drummer Ogoun. The two combine percussive forces through Oya incorporating cowbell, tambourine, and bongo (to name just a few) into her vocal display, perfectly augmenting the band’s unique blend of soul- and afrobeat-inspired psychedelic heaviness. However, it proves to be six-stringer Marassa that demands the lion’s share of my eyeballs’ attention; with an impressive low-end rumble given the band’s lack of traditional bass player, the guitarist’s fingers never stop frantically dancing up and down the frets, seemingly playing two parts simultaneously, whilst moving from Kyuss-esque grooves to screaming solos at a moment’s notice. 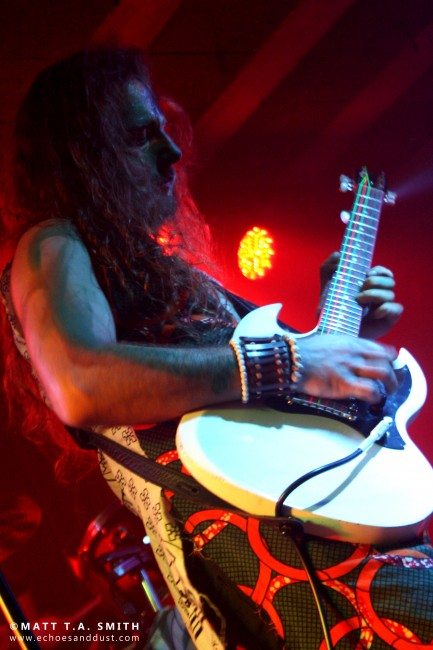 Throughout their time onstage, heads in the audience nod heavily in unison as if agreeing with every thunderous beat, and although Oya can barely catch her breath when addressing the audience prior to the band’s final song, it doesn’t stop her from belting out a crushing rendition of ‘Mawu’, bringing their all-too-short time in the spotlight to a close. 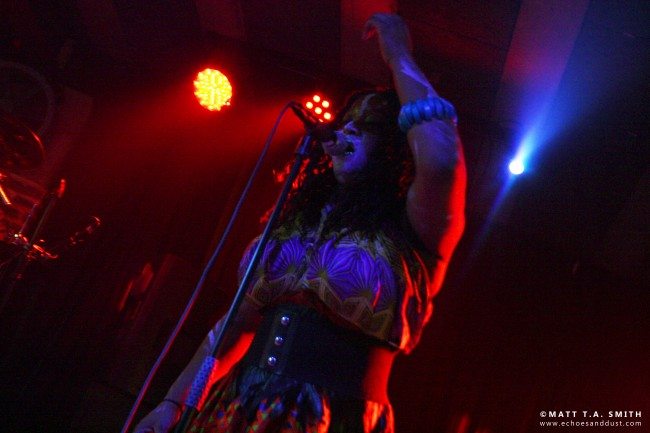 Whilst not as commanding of the stage or as visually wild, yet just as technically competent, Dystopian Future Movies‘ drone-like sludge is juxtaposed with finesse against beautifully gentle arpeggios. Overlaid with ethereal vocals and underpinned by menacing, driving basslines, DFM deliver what appears to be an effortlessly captivating performance. The soft guitar and vocal pairing combined with the band’s masterful execution of quiet/loud/quiet dynamics can at times be reminiscent of early Deftones material, though their compositions inevitably prove much heavier, backed by some sublime double pedal work from drummer Bill Fisher throughout (who, incidentally, also wins my ‘Trousers of the Day’ award for his excellent vertically-striped jeans).

Whilst I would never be so condescending as to give praise solely due to a musician’s gender, I feel it would be remiss of me to forego using this as an opportunity to express how positive it is to see a band as heavy as DFM comprising primarily of women (in this case, guitarist/vocalist Caroline Cawley and bassist Emily Azadpour) succeeding within such a notoriously male-dominated scene. I should also point out that this admiration must also extend to not only the groups on today’s bill such as Vodun and Fvnerals, but to both the venue’s staff and audience, which also hold strong female contingents. 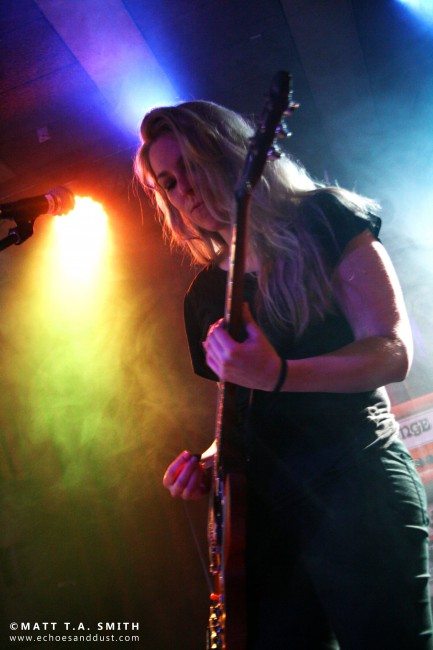 Speaking of Fvnerals (and ignoring their decision to join the apparently ever-growing collection of bands that insist on swapping vowels for Vs in their monikers), the band’s haunting, gothic delivery is well received at a difficult point in the day’s running order. The performance suffers slightly due to repetitive song structures and a lack of variation in tempo across the set, but proves enjoyable nonetheless, with their brand of crushingly heavy, down-tempo doom tempered by Tiffany Strm’s graceful vocals, backed by booming keyboards and pounding drums. 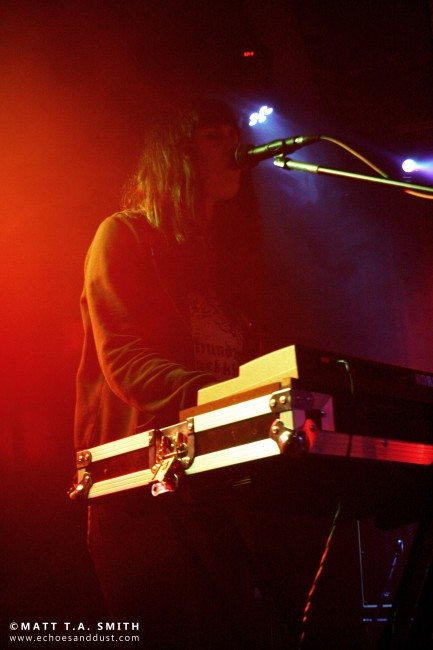 However, Limb are simply on another level this afternoon. Thought the standard was high already today? Limb immediately up the ante with a performance that blows the crowd away and the preceding bands out of the water. Lit by a single lamp from the side of the stage, Rebellion packs out for a shadowy master class in doom; devastating guitars crunch in perfect harmony behind frontman Rob Hoey’s uniquely commanding gravelly tones whilst he prowls the stage, inciting crowd involvement at every opportunity. 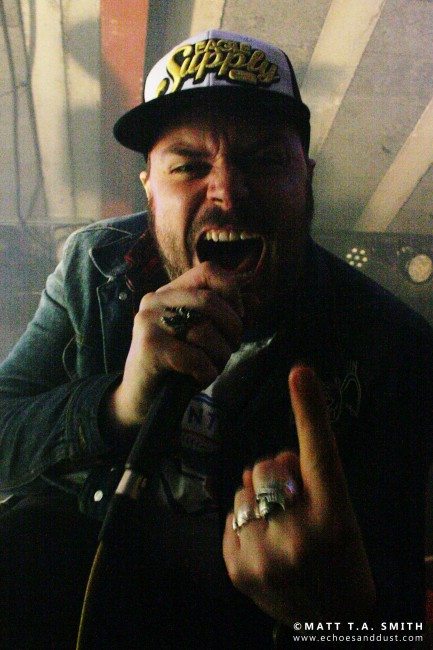 The band’s amalgamation of old school rock ‘n’ roll stomp and hardcore heaviness is exhibited in outstanding fashion through an exhilarating mid-set one-two punch of ‘Dawn Raiders’ followed by a punishing ‘Plague Doctor’, while the band continues to impress with a masterfully subverted rendition of Johnny Cash’s ‘Down By The Banks’. Unfortunately this is to be their closing number as their set is unexpectedly cut short, bringing to an end a flawless, albeit brief, performance by a phenomenal group of musicians. 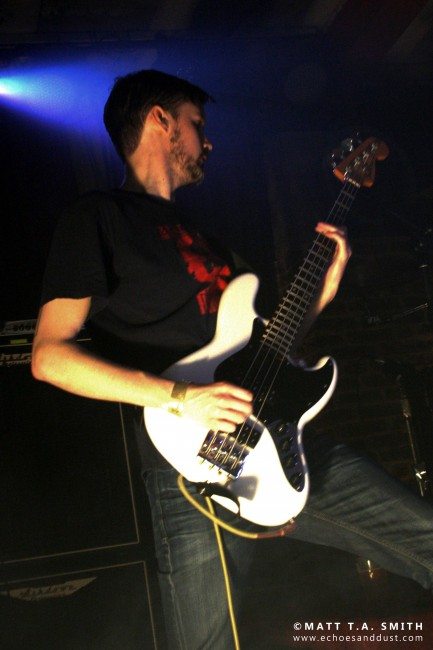