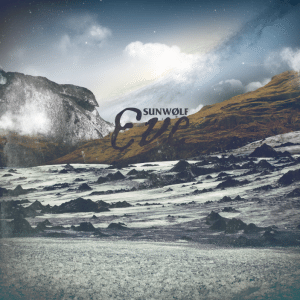 In the last few years of playing music and being in bands, I have seen a pattern emerging. There are some bands that record a piece of work that gets them recognised, gets them acclaim amongst their peers. Which is what every band strives for, right? Then, however, they somehow manage to take a step sideways instead of forward. Unfortunately, some bands these days are hell bent on having a plan and never deviating in any way, shape or form. Rules are set in stone and are not subject to change. Enter Sunwølf.

Sunwølf are not one to rest on their laurels and pummel the listener into submission with album after album of atmospheric doom metal. With each release they have become a force to be reckoned with, from the lo-fi ISIS worship of Beyond the Sun in 2012 to 2014’s remarkable Beholden to Nothing And No One, it’s clear to see that they are not ones to shy away from doing things exactly as they see fit. In 2015, Matt Carrington designed and built his own studio onto his home in North East Scotland and went to work on album number four which would later be named Eve after the birth of his baby daughter. After tracking all nine songs in relative isolation, Carrington sent them to long time Sunwølf collaborator Ross Halden for mixing. It really is clear on first listen that Halden gets exactly what Sunwolf are about, allowing the pieces to breathe naturally without condensing them and taking the soul out of them.

The songs on Eve have such a strong cohesion as a set, but also have separate identities within the album. Opener ‘Gilded Heart’, which is also the lead single from the record, is stunning. The guitar lines flit in and out of each other, shimmering over drum loops and building up to the catchiest hook I have heard in quite some time. What I find most moving about the song is that underneath all of the beautiful instrumentation there is a howled, almost black metal, vocal (contributed by Oliver Melville). It adds a very real sense of sadness and melancholy to the song. It’s overwhelming and utterly brilliant.

‘A Rest Mid The Gloaming’ lurches into life with what has almost become a signature Sunwølf riff, with nods to the likes of Amenra and Earth, mournful and delicate passages of guitar atop simple and deliberate drums. Chanted vocals enter half way through, they fit the piece perfectly and lead the song into the outro, stark guitar is replaced with strummed clean chords and a huge ambient passage, bathed in beauty and laid to rest. ‘Quell’ is the shortest song on Eve, it starts with chimed guitar chords and a spoken word vocal, again contributed by Oliver Melville, again buried in the mix, adding another dimension to the song rather than it being the case of singer/band. After around 2 minutes the song stops for a split second and bursts to life in 4/4 with upbeat drums and post-rock textures to close.

Up next is ‘Haar’, another upbeat piece, which back to back with Quell acts as a companion piece to its predecessor, to my ear at least. Plodding drums underpin haunting guitar lines doused in reverb with a harsh, commanding vocal, this time by Nathan Coyle of Opium Lord. The vocals on Eve compliment the pieces that they are part of really well, never ever taking away from the instrumentation at any point. ‘Sun Of My Soul’ is a progressive post-rock Goliath, starting with a plucked, whispered guitar line, which sweeps around the drum flourishes, drums that crash in and out of the piece, becoming constant and purposeful. After 3 minutes a strummed doom riff enters, chords steeped in hazy tone, unsettling guitar howls bury the opening hushed passages before creeping to an end. My only gripe is that it’s not 10 minutes longer. Absolutely wonderful.

The title song to Eve is my favourite on here. Also it allows you to get your breath back after ‘Sun Of My Soul’. It builds with beautiful layers of clean guitar. I must say that the guitar tone on this record is unreal, even in the clean passages there is real warmth to the guitars and especially in the sections of layered guitar, they sound absolutely huge. On this album Matt Carrington does what Mogwai do so well and on this song in particular, it’s spacious without being too light and airy. Also this song could have been made over complicated and self-indulgent, I like how simple it remains so throughout. I felt absolutely overwhelmed by the end of the piece. Its stark beauty is undeniable.

The next two tracks on the album, ‘Brother’ and ‘Frontier’, are again like ‘Quell’ and ‘Haar’ were earlier, perfect companions to one another. Brother starts with an almost Western style riff over looped percussion and guitar ambience, which builds for 4 minutes and then gives way to a sweeping, post-rock riff, which puts me in mind of latter day ISIS (shut up, I like In the Absence of Truth, okay?!) the percussion changes and the piece becomes almost trance-like until the guitar is stripped from the track and the drums stutter to a halt after just under 9 minutes. ‘Frontier’ starts with a droney guitar line that wouldn’t have been out of place in the outro to ‘Brother’, the droney guitar riff remains a constant throughout the song, morphing into another half way through. The drums underpin the song, pushing towards an intense finale, with layers of effected guitar, stabbing and sweeping their way through the mix until the song finishes at just over 7 minutes. The last song on Eve is the understated ‘Winterworn’. Minimal guitar lines intertwine to create a gorgeous passage of music that brings the album to a hushed end. Much like the title track I really enjoyed how simple the song is and only the absolute necessary instrumentation is used.

Eve is incredible. There is still plenty to satisfy existing fans of Sunwølf, but I truly believe that this album will see the band enjoy the recognition they are deserving of. It is only March but you will be hard pushed to find a better record this year.

With the release of Eve only a month away, Fraser Samson had a chat with Matt Carrington about his creative process and life in the North.

(((o))): I have always wondered about your creative process. Do you write material based on how it will sound on record or how you think it will translate to a full band/live setting?

Matt: More often than not I’m writing material with an ‘album mindset’ and picturing how it will sound in context with other songs. This can be problematic live though, especially if I’ve layered up the guitars or used a bunch of other instruments… it can be really hard for the material to translate live.

There are a few songs on Beholden To Nothing And No One that we have never played live because it would’ve meant running too much stuff off backing tracks, which would’ve felt a bit daft. There were a lot of guests on the last album, which presented a few issues for playing live also. There are only 2 guests on Eve, though.

(((o))): I really like how sparse Eve is, do you think that you will ever play it in its entirety live? Also is that a format you enjoy when going to a show, or do you prefer to see a band put more thought into their set list?

Matt: It is a format that I think is a great idea, especially for these huge bands that have been going for years. One that springs to mind is the Saint Vitus Born Too Late show that happened a while back… that would have been something else.

However, I think it would be touch self-indulgent for a band like Sunwølf to do a show like this, plus I enjoy mixing up the set lists to keep things more interesting.

(((o))): Having seen what a dynamic live band Sunwølf are, do you think that recording in a live band setting is something you want to explore on future records? Or do you like the relative peace and quiet of recording by yourself?

Matt: Writing and recording with Sunwølf can be tricky. I’ve always wrote the majority of the material. I’m a bit of a control freak and have a very clear idea of what I want to do. I do enjoy collaborating though, but the chemistry has to be just right for it to work, if there’s a conflict of direction, or a ‘too many cooks’ scenario then it can sound a bit cobbled together and forced. A lot of the Sunwølf material is so slow, sparse and simple, it would be overkill to have 5 guys playing on the tracks. Having said that, I’ve really enjoyed playing live as 3 piece recently. Scott and Steve have added a new dimension to the live sound. We were touring with 4 guitar amps last year and it sounded unreal!

(((o))): Having relocated to North East Scotland, does it affect how you write? Have you ever been influenced/ inspired directly by your surroundings or do you always have a concept in mind before starting a new project?

Matt: I think we all unknowingly take influence from our surroundings. A friend recently said of the material on Eve ‘living in Scotland has influenced your music’. I wasn’t sure how to take that, but I think there’s a truth there. Scotland is a stunning place, with beautiful scenery and a rich history. I think it’s near impossible for people to visit these parts and not take influence from them in some way.

Location doesn’t have a direct influence on the Sunwølf material I write, but it definitely informs the creative process.