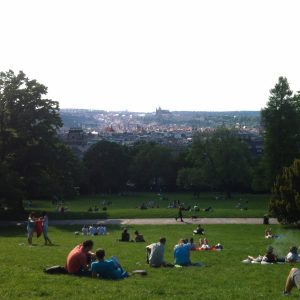 Released on December 1, 2015 via Experimedia

The moniker rootless, the platform from which Brooklyn-based Jeremy Hurewitz releases his solo music endeavours, offers his latest effort rootless. This un-capitalized self-titled release comprises three new tracks, and three remixes of those tracks, each encompassing Hurewitz’s style of ambient post-rock drone set to spoken word dialogues that help to set the tone of the entire work’s body. Hurewitz certainly presents some nice ideas on this latest effort, which sees some good concepts coming together harmoniously, though we are let down by a second half to the album which essentially starts the whole cycle again, albeit a more dull cycle.

The strengths of rootless come from Hurewitz independent style of music composition, which has resulted in a creative and mostly enjoyable form of post-rock whilst also encompassing styles of ambience and psychedelic. Hurewitz’ spoken word helps create the setting for the songs, something which is often a struggle in experimental post-rock music. Here though, it is competently achieved, and results in some enjoyable musical passages, where synthetic elements combine comfortably with analogue music to create harmony. It’s a little cosmic and noisy on occasion, but when it works, it works nicely, with there being some lovely and gentle post-rock aesthetics accompanying some fairly interesting poetry.

When it doesn’t work though, it becomes tiresome, and sadly this is due to Hurewitz’s decision to muddy up his album with three remixes of the same three tracks on the first half. Although these remixes do their best to draw out some new elements from the original source material, it just feels entirely unnecessary. We’re essentially made to listen to the entire album all over again from the very beginning, except this time everything is just less colourful and less interesting, making this part of the endeavour pointless. This is helped less by the fact that although most strengths are in the first half, it is let down by this weird element of everything building up, without ever leading up to something. It’s almost as though each track is an introduction to something, though we never find out what it’s trying to introduce.

There’s some merits here and there, and definitely some nice ideas across the album, though there’s a fair amount to wade through before you find anything you might attach yourself too. One might consider the more recent work of Sun Kil Moon’s Mark Kozelek, and his spoken word styles accompanied by a variety of different musical genres. There’s definitely some enjoyment to be had here, though the main body of work is far from perfect. It’s certainly nice at times, with there being very enjoyable drone and post-rock elements, though sometimes it feels a little thin on the ground.