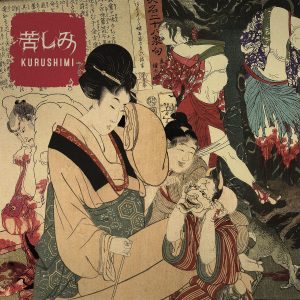 Released on February 16, 2016 via Art As Catharsis Records

Let me level with you: Riffs and saxes.

That’s what you get with this record. Riffs and saxes.

If you don’t like riffs and saxes then feel free to move on, but if you do, you’ll be missing out on an audacious bastard-hybrid of doom metal and jazz like none other. How long have you lived without any doom-jazz in your life? How long have you lived without riffs and saxes? Too long, I’d say. I’ve a great love of doom, jazz, and indeed, dub. I never thought I’d ever find a record that combined all three with such virtuosity and impish glee.

This inspired and quite brilliant album speaks to the head as well as the heart, with nine improvisations based around Japanese culture. Available on the Art As Catharsis label, Kurushimi are something of an Art As Catharsis supergroup drafting in members of Serious Beak, Instrumental (adj.), SEIMS, and Fat Guy Wears Mystic Wolf Shirt.

Amongst their weaponry are saxophones of various octaves, flutes, (Kim Lawson and James Ryan), electric guitars (Simon Dawes), drums (Chris Allison), and unusually, two conductors (Andrew Mortensen and Lachlan Kerr). The conductors are important as it is they who control the direction of this chimera as it rages, shrieks, and squeals its way across eighty or so of your Earth minutes.

Eighty minutes of improvised avant-garde doom-jazz may be for some, about as appealing as having one’s testicles set on fire as part of the Rio 2016 Olympics opening ceremony (I’m available for that gig, Rio organisers, if you’re reading), and it’s true, this album isn’t going to get any Radio 1 airplay anytime soon. But if you’re in the mood for unbridled, joyous bedlam then you need to get your hands on a copy of Kurushimi right now.

Kurushimi means ‘Anguish’ in Japanese, the album cover features various daemons and visceral body horrors – in traditional Japanese styles. Monstrous things – monsters even – and destruction are an essential part of Japanese culture – from the creatures of traditional folklore to the megacity levelling giant robots of today: destruction/renewal – from my Western perspective, this is not unsurprising in a land wracked by seismic and volcanic activity. It’s a deeply rooted seam which Kurushimi are determined to mine – providing a sonic experience, a soundtrack, for a world intent on destroying itself while at the same time, drawing a sadistic enjoyment from the suffering.

The thing that makes this record really shine though, is the interplay between the musicians here. Lawson and Ryan’s saxophones riff with, and against, the guitars of Dawes and Mortensen – almost like two monsters locked in a battle to the death, while the whole thing is driven along by Chris Allison’s drumming conjuring the darkest of magics as each track scuds into you like a battery of artillery fire. I can’t really explain what it feels like – and writing this review was one of the hardest ones for me to do as I just didn’t think I had the vocabulary to describe something that has to be faced to know it properly, you just have to put it on and experience every ferocious minute of it.

Perhaps the most stand out tracks here are the longer improvisations: ‘Kimon’, which moves from hypnotic dub to an all out guitar shredding thrash while visiting all points in-between; The percussion addled ‘Amanojaku’; and the most intriguing track ‘In A Grove’, which alternates between a merciless ear-splitting, migraine-inducing, cacophony and the organic sounds of a natural world. There is though, tension and drama throughout the recording and you’ll find yourself hypnotically swept away as you wait for each musical progression to resolve itself with yet louder and longer passages. There’s even a nod to to Napalm Death style brevity in the 18-second long ‘Dodomeki’.