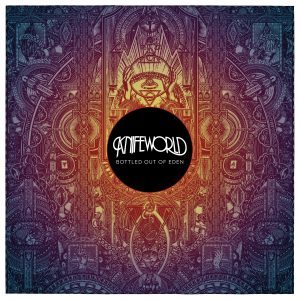 How would I describe Knifeworld to the uninitiated? An experimental psyche/rock band roughly forced into a room containing a glockenspiel and a raft of woodwind instruments? I’d say that is certainly a start, but it’s doesn’t begin to define the creativity and sheer talent contained within this 8 piece from London. There are moments of obvious influence from bands such as Barrett era Floyd and also obvious links to Cardiacs, but Kavus Torabi brings his own unique input to these arrangements creating a style that really, quite uniquely, belongs to Knifeworld.

The press pack asserts that this is an album “Inspired by the death of loved ones, Bottled Out Of Eden is an eleven piece song cycle of loss and hope”. In its nearly 50 minute run time, the album cycles through motions of loss and despair, but always moments of hope, beauty and optimism win through. Beautiful and often fleetingly discordant harmonies create movement and tension throughout this record. There are some very dark moments, but these are tempered by a return to light and exhilarating melodies, perfectly crafted to enthral and enchant the listener. Somehow there is a great sense of openness and accessibility about this album, only hinted at in their previous release The Unravelling. That is definitely not to say that the song structure and forms used have become simplified. Depth and complexity still abound, but they somehow sit more comfortably on my consciousness. There is contradiction here, and coherency. This is still very definitely a Knifeworld album.

The album starts with ‘High/Aflame’, an unsettling drone of textured synths, rapidly augmented by Torabi’s plaintive voice, builds to a driving and urgently rhythmical track, slowly introducing woodwind elements, turning melancholy into a calm, measured elation and setting the scene for the ever-changing soundscape to follow. ‘The Germ Inside’ starts with a piano line in a minor key, morphing into a subtlety off-kilter beast, adding sharp stabs of woodwind and additional layers as the track progresses, continually evolving into something thick and frenetic, only to end on a perfectly nonchalant guitar line and the distinctive clatter of a discarded tambourine.

After quite a frenetic start, ‘I Am Lost’ thins out the sound somewhat starting with insistent, funky woodwind and bass, dropping out to just the bass, leaving room for lighter feminine vocals to fill the void. This is the longest track on the album and has plenty of room built in for some serious dynamics. This track alone quite possibly has more ideas and themes than some albums I regularly listen to. Once again, for all that intricacy, there is a singular vision and intent bringing everything together and driving things forward to more of this story.

‘The Deathless for me is certainly one of the highlights of the album, politely introducing itself with a rolling tom line and a gentle, delicate riff from Kavus’ guitar. This is quickly layered with vocal stabs, and bassoon, developing into a complex and richly structured harmony that shimmers with a delicate grace, only to be brashly interrupted by urgent guitars and build to a rich climax. Long enough to give you a taste of the band’s self-made Heaven and self-imposed Hell.

The next two tracks temper the built up momentum and settle the album down to a more sedate place. ‘Foul Temple’ with gently delivered, if somewhat sinister, lyrics and almost folk acoustic guitar segues nicely into the 30 second bassoon and clarinet interlude of ‘Vision of the Bent Path’. ‘I Must Set Fire To Your Portrait’ starts off quietly with some terse, pithy guitar and slowly morphs into an ostensibly chaotic composition, cleverly building up the tension until you are asked “Do you feel you were born again?”. Then follows a rapid descent into mischievous and almost malevolent territory. “Saw you hanging up from your wire. I got matches let’s start a fire” setting the scene for the ensuing darkness.

‘Lowered Into Necromancy’ is a masterful display of how angular guitar riffs and inspirational use of drum lines can mix with cleverly timed lead and backing vocals to make the 4/4 time signature sound utterly otherworldly. This is of course, before the structure subtly changes to bring everything back into a more standard focus to excellent and uplifting effect. ‘A Dream About A Dream’ carries on with this gentler theme, deftly building tension throughout until fading back into solitary, almost lonely keyboards. A theme picked up by ‘Secret Words’, steering us towards the end of this album with a piece that flips from destitute melancholy to passages almost reminiscent of an acoustic Led Zeppelin track. Finishing the album and providing a welcome uplift to the mood is ‘Feel the Sorcery’, proffering a way out of the loneliness into a triumphant, almost poppy bookend to a 50 minute tour of the band’s collective psyche.

Bottled Out Of Eden picks up where The Unravelling left us in 2014, nevertheless, this still feels like a fresh start. Everything has been expertly honed. The composition, the recording, and the production. Consequently, everything is left sharper, in greater focus. This feels like an album that was crafted to be played live, in all its glorious complexity, fit to excite, confuse, and animate any lucky audience that it happens upon. Drawing on past influences, creating new and unexpected directions from almost familiar cues, each track holds its own secrets. Many only starting to be revealed on repeated listening. Yet despite the sometimes significant and unexpected changes of direction, there is a sense of completeness, of a story well told, flowing perfectly from beginning to end, dragging you mercilessly through all the unpredictable alleyways of Knifeworld’s collective consciousness.

This is a fittingly epic third release for a band with this level of mastery of their form. A truly kaleidoscopic wonder of progressive psychedelia, replete with glittering gems reflecting and fragmenting the abundant light, but mixed with dark, sinister, opaque moieties, which when skilfully woven together create ever shifting and beautiful patterns in the mind’s eye. I can’t help wondering which dark stories they will draw on for the next glimpse into their utterly fascinating world.